Kristen Bell rocked a colorful print jumpsuit while attending the screening of the movie The Judge during the Toronto International Film Festival this week. Bell and Parenthood actor Das Shepard are expecting their second child. (HuffPo)

Zoe Saldana looked super cute in a print collared dress while on the red carpet to the  premiere of Cantiflas on August 27th. She’s reportedly carrying twins yet is managing to steer clear of the usual maternity wear

Meanwhile, Gwen Stefani  told talk show host Seth Meyers during an appearance this week that her son Kingston prayed for her to get pregnant again after she had already told him tha tthe family is “complete”.

“I brought out a cake after we found out it was really going to happen and it said, ‘We’re having a baby!’ I made him read it … and he goes, ‘Ahh! I prayed for that!’” (People)

Former Pussycat Dolls member and current Got to Dance judge Kimberly Wyatt went with a mini maternity dress under a black leather motorcycle dress while spotted outside the ITV studios in London, England on August 29. She totally aced the rocker preggers chic look. (entertainment.ie)

A couple of our Bellyitch Bumpwatch moms Zoe Saldana and Hayden Panettiere used the ALS Ice Bucket Challenge to confirm their respective pregnancies.
While getting a bucket of ice and water poured on their head to raise funds and awareness for the debilitating Lou Gehrig‘s disease, each star made their first public acknowledgment that they are with child.
The viral sensation has been going around social media for a while now. The ALS Association, which works on awareness, research and a cure for the rare disease, Amyotrophic lateral sclerosis, saw the challenged and got celebrities involved. The star aspect has been successful in getting the group to raise over $41 million, the New York Times has reported The foundation received $19.4 million in proceeds last year, but thanks to 739,000 new donors, the ALS Association doubled its donations in one month, it said.
Saldana actually didn’t pour ice water over her head but had her hubby do it instead.
“I am accepting James Gunn‘s challenge to take on the ice bucket challenge in support of finding a cure for ALS…,” the Guaradians of the Galaxy star said while rubbing her pregnant belly. “Obviously, I can’t do it myself so I nominate my husband to take on the challenge.”
The Avatar actress and her hubby Marc Perego then nominated James Cameron, Aileen Getty, Ron Burkle, and Francois Pinault to accept the challenge next.
Well…technically, there is nothing stopping a pregnant woman from getting ice and water poured on her head…and in fact, Panettiere one upped Saldana  by actually going through it herself.
The Nashville star summoned help from her buddy Dancing with the Star’s Derek Hough to pour the ice, but just before she said, “I accept my ALS Challenge. I renominate Kacey Musgraves — you’re not getting out of this, [fiance] Wladimir Klitschko, and my unborn child.”
“Couldn’t figure out how to post it on twitter,” Hough, who is currently guest starring in an upcoming role on Nashville, wrote in the caption. “So I’m posting it for her.” 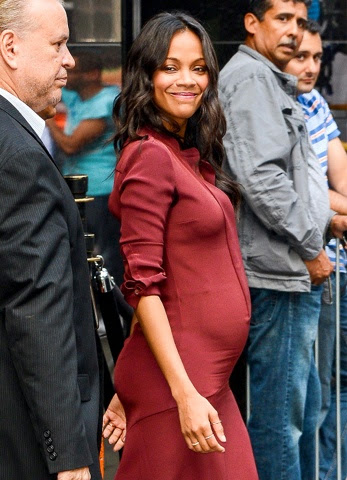 In case you’ve missed it, Zoe Saldana isn’t hiding her growing baby bump any longer ever since her publicist confirmed her pregnancy last week.
The Avatar actress has been on the interview circuit promoting her new move which opened this weekend, Guardians of the Galaxy.  —including in the photo above when she was spotted heading into a taping of Good Morning America this week.
Bump proud!
Photo: starcast
0 comments

Even Bellyitch Bumpwatch alums like Garcelle Beavais is congratulating Zoe Saldana on her pregnancy with twins, reportedly.

But the Avatar actress has chosen to blast the media for publishing insider information it got from sources about her pregnancy. She took to Twitter to complain:

“I believe that any violation of privacy is nothing good.”~Lech Walesa. I would like to thank all the fucking media for invading our privacy,” she wrote on Thursday.

The Pirates of the Caribbean star looked stunning in a white Chloe  Fall 2014 full sleeve tiered dress, accented with red Bionda Castana “Lana” pumps  at the Guardians of the Galaxy‘ media event at The Corinthia Hotel in London, England on Friday, July 25.
One day before, she also stunned in a print Valentino  dress with a ruffle collar at the UK premiere of the movie at Empire Leicester Square, also in London.
At the Hollywood premiere of the movie on Monday, July 21 at the Dolby Theater in LA, she looked to be attempting to hide the bump in a curious Louis Vuitton outfit. Nice try mama. Her publicist gave up and confirmed the news that week anyway.
0 comments

It is confirmed! After early speculation a few weeks ago, a publicist for Avatar actress Zoe Saldana confirmed the star is three months pregnant.
This will be the first child for the Guardians of the Galaxy actress and her new hubby of about a year  Marco Perego.
And how cool he shared the same name as a popular baby manufacturer who was listed in our 2013 Bellyitch 100! Peg Perego! ha!
Congrats!
photo: Starcast

What’s up with some of the celebrity ladies we’re tracking and “bump watching” theses days? We round up some of the sources reporting on them for you here:
Gone Girl‘s Casey Wilson is expecting her first child (VH1.com)
Kourtney Kardashian had a brunch baby shower in Beverly Hills and all her sisters attended (Reveal UK)
You couldn’t see much of a bump on Kate Middleton who wore an elegant long black lace Diane Von Furstenburg dress at an outing this week (UK Mirror)
Zoe Saldana looked comfortable and like the average heavily pregnant with twins mom while house hunting with her husband Marc Perego recently  (Mirror)

What’s new in celebrity bumpwatch news? Here’s a mini-round up:

Amanda Peet is having a baby boy. (E!Online)

The Sam & Lavi maternity dress that actress Blake Lively  wore in her pregnancy announcement has sold out (E! Online)

Zoe Saldana looked pretty in pink posing with her husband Marc Perego on the red carpet to the premiere of her new project The Book of Life  at Regal Cinemas LA Live on Sunday, October 12. (Just Jared)

Here is an update on the currently pregnant celebrities we are “bumpwatching” these days:
Vanessa Lachey was spotted out and about shopping recently.
Milla Jovovich looked fab in white at the Italian premiere of Cymbeline in Venice Film Festival on September 3.
Kourtney Kardashian shopped at the La Cienega Design Quarter for her home in Beverly Hills, California on September 2, 2014.
While Shakira was seen at a Basketball game with her fiance Gerard Pique at the World Basketball Championship in Barcelona, Spain.
Meanwhile, Zoe Saldana and her director sister Cisely Saldana were radiant at the Boss fashion show during Mercedes-Benz Fashion Week Spring 2015 on September 10, 2014 in New York City.
And
Kelly Rowland was looking quite cute and very preggers while reaching out to her pal the new US Open Champ Serena Williams who just matched Chris Everet and Martina Navratilova’s record of 18 Grand Slam wins. Her win Sunday was her 4th consecutive out of 6 overall US Open championship.

While previewing her collection Tuesday of her Serena Statement Collection for the HSN Network, Williams got a text message saying “Anna is here” as in Anna Wintour, the Vogue editor who every designer wants to present before.

Rowland wanted her friend to know she is also there for here. It was A bump -a-Looza this week on daytime television.
Mom-to-be Savannah Guthrie interviewed Bellyitch alum Megan Fox on TODAY.  During the interview, Fox shared the fact that she got pregnant one week into the filming of her latest project, Teenage Mutant Ninja Turtle.
The mom-to 2 boys with hubby Brian Austin Green gave Guthrie advice & assured her that sleepless nights are in her near future.
Meanwhile, Zoe Saldana continued to promote her latest project, Guardians of the Galaxy.
She stopped by The Talk to chat with the hosts and said she doesn’t judge those who opt to have a baby out of wedlock, noting her own personal feelings.
Saldana wore a long sleeve hot pink bump-hugging pencil -skirt length dress and had that pregnancy glow on.
0 comments

Shop our favorite retailers for the perfect pregnant bridesmaid dress.

So you have a pregnant lady in your bridal party. First thought: Yay! Second thought: Oh, boy! (Or girl!) How to dress all your bridesmaids—including your pregnant bridesmaid—in the bridesmaid dress of your dreams? Don’t fret! You’re not the first bride-to-be with an expectant bridesmaid in your bridal party, and you certainly won’t be the last. Thankfully, many bridesmaid dress companies are recognizing that fact. Believe us: There are plenty of stunning maternity bridesmaid dresses to choose from today, and we’re putting them all in one place for you! Whether you’re going with mismatched bridesmaid dresses (i.e., giving your ladies a colour or style to look for and letting them choose the dress they feel most comfortable in) or crave a more uniform look, we’ve found gowns you (and your pregnant ‘maid) will love.

HERE ARE OUR FAVOURITES

For an endless variety of cuts and colors, it’s hard to beat The Dessy Group! In addition to carrying go-to brands like Alfred Sung, After Six and its own collection, the store has a dedicated lineup of maternity bridesmaid dresses. Better yet, many of the styles come in dozens of shades for any wedding color palette. We like this long maternity bridesmaid dress for its empire waistline and unique neckline. It doesn’t hurt that it comes in everything from a moody, black floral “Noir Garden” pattern to a solid, purpleish peony hue called “Enchanted.” And FYI, everything sold by The Dessy Group comes in plus sizes up to size 30.

Seraphine—a favourite of Duchess Kate and Zoe Saldana’s—is known for its stunning collection of formal maternity dresses, including pregnant bridesmaid dresses. While the brand is pricey overall, the quality and refined details are hard to beat. We love this floor-length blush stunner for its lace bodice, cap sleeves and jewelled waistband.

This fast-fashion retailer may not be dedicated to wedding wear, but it actually has a vast assortment of bridesmaid dresses—including maternity bridesmaid dresses. The site is our source for inexpensive, trendy options, with some timeless styles thrown in there too. (It’s also got an inclusive array of tall, petite and plus size attire for the rest of your bridal party.) Can you stay stunning? This springy yellow maternity bridesmaid gown has a trendy off-the-shoulder neckline, a sparkly sequin bodice and pretty pleats. Oh, and it won’t break the bank. (It also comes in a cool silvery gray shade.)