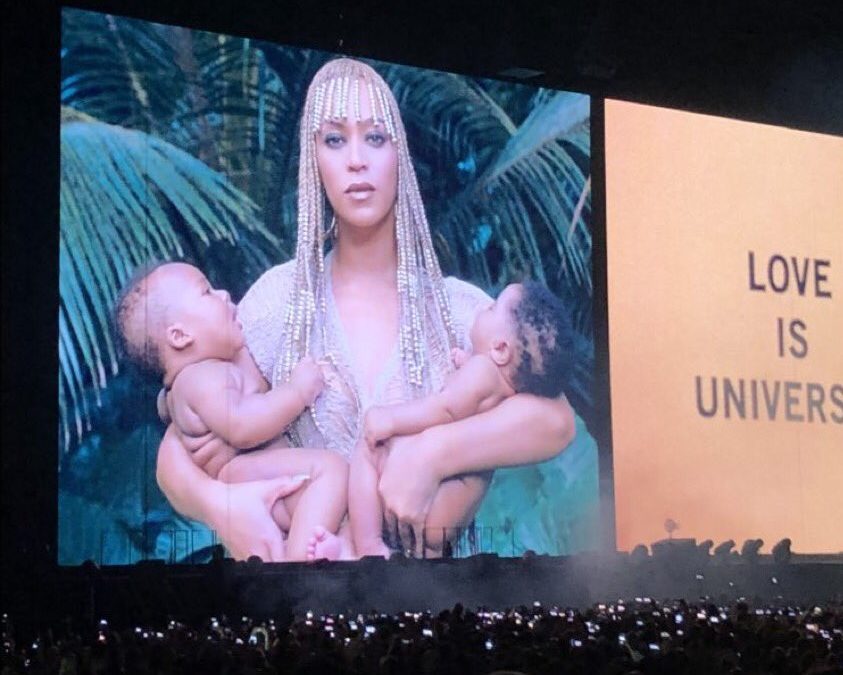 Update:  Beyonce’s rep states that the babies she is holding are not her twins. Hrmph!

Beyonce gave the audience in Cardiff, Wales the first glimpse of her twins Rumi and Sir Wednesday at the opening of her and husband Jay Z’s “On the Run II” Tour.

In a large screen video showcase, an image of the superstar in beads and braids appears with Queen B cradling each child in one arm.  The words “Love is Universal” appears as well. The photo is reminiscent of her first photos that she shared shortly after the twin babies were born last July 2017.

One fan capture the image and it quickly went viral. The photo is old’ish because, by now, her son and daughter are close to 1-year old. The show features  another showcase with Jay-Z holding the twins too.

Now, a lot of people’s curiosity is piqued as to whether Blue Ivy or other precious family moments will be shared.

Just because Beyonce has revealed the names of her twins, Rumi and Sir Carter, early this morning doesn’t mean she is done dangling Swarovski –encrusted carrots in our faces.

We still don’t know the sex of the babies.

Perhaps they jumped the shark and we all joined in! Hmmmm. * side eye emoji *

The name Rumi appears to be homage to a 13th century Persian poet by that name — and Sir happens to be referenced in one of his most famous poems:

“Bring the pure wine of
love and freedom.
But sir, a tornado is coming.
More wine, we’ll teach this storm
A thing or two about whirling.”

It is still not clear and apparently, people are fighting about it in social media.

A friend of mine and I had a lengthy convo this morning about this very subject when she asked me to confirm the sex of the babies.

She pointed out the fact that it looks like the  emoji’s on her caption are two boys.

But the baby emoji is gender neutral.

And she pointed out that Bey is wearing a purple and blue robe and purple is a color often associated with girls as well,  so there is that also.

Is this an ode to the late great Prince or something?

Long story short, no, Bey is not done messing with us.

I agree with Sarran at this point:

And here, take my hashtags to commemorate and celebrate this moment. Feel free to grab any to accompany your photos sharing the occasion today.