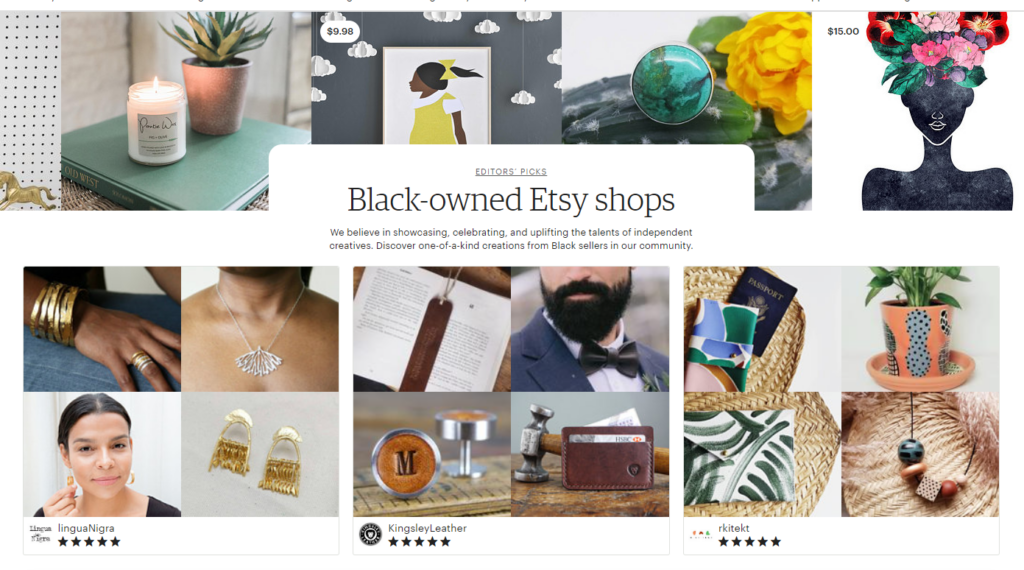 I love that these brands are featuring black creators like Etsy (above) and Blogher (below).

Here is more things that you can do:

I also excerpt Sophia Clarke’s opinion piece for BlogHere here where she implores all those out there taking actions to be more intentional especially after the whole Black Square campaign launched a couple of weeks ago.

On the individual level, the Black Square does nothing.

It does not absolve you of your ignorance, inaction, or the racism within. It does not forgive the time you yelled the N-word as you sang a song, or fetishized a Black person, or called the cops because you saw someone “suspicious.” It doesn’t elevate Black voices, brands, or the Black Lives Matter movement. It’s a poor attempt to show that you’re “not racist” while doing the bare-minimum. It’s not really for anyone but your followers – it’s entirely performative. An empty, thoughtless, post. It’s the digital equivalent to a shoulder shrug – a half-hearted yes. It is like the presence of someone at a party who doesn’t want to be…

..The Black Lives Matter movement isn’t a trend. It is not a peplum top or a fun new bar or food in foam form. For Black lives to continue to matter, for Black life, joy, and prosperity to be centered, the movement must continue. Social media is powerful. So is whiteness. And to not use these forces to do something actionable within your network – anything – is peak privilege in action.

The Black Square posts do not show solidarity, but rather just a thinly veiled performance. An attempt at activism. A toe dipped into a churning sea of constant movement. Performative activism stems from not wanting to be called out for silence, but why resign oneself to this possibility when there are so simple ways to do actually do something? It can be simple as having a conversation with yourself as to why you’re afraid to declare yourself an anti-racist. That’s a great place to start.

Mainstream news has done a poor job at accurately portraying what’s happening on the ground.

Protests have been largely peaceful, and social media has been essential for disseminating the latest facts, actions to take, and updates. It’s been an incredible tool for fostering collective action. But beyond the facts, there has been a reckoning for white people online and how to understand the privilege that whiteness holds.

Doing your part, and using this privilege isn’t just cool this week – it’s essential always. It’s a commitment to justice, and there’s so much work to do. Jump in – the water is fine and history will remember you well.

At the time of publication, no arrests have been made for the murder of Breonna Taylor in her own home.

[June th] would have been her 27th birthday.

Here’s a petition to sign to ensure justice and share your action on social media using the hashtag #SayHerName. Measurable actions have worked, and will continue to work, as long as we keep speaking up, sharing the facts, and holding each-other accountable on, and offline.