A week after captioning a Instagram snap of her overdue baby bump, “Come out you little sh_t!”, Nicole “Snooki” Polizzi welcomed her third child, a baby boy named Angelo.

“So thrilled to welcome baby Angelo into our little family!” she confirmed the news to People magazine. “He is so sweet and a spitting image of [son] Lorenzo as a baby. Jionni and I can’t wait to see how being outnumbered turns out!”

The couple wed in 2014. Both starred in a reboot, Snooki & JWoww, Jersey Shore: Family Vacation.

Last week, Jennifer “JWOWW” Farley showed off the super cute gender-reveal cake on Instagram that her bestie Nicole “Snooki” Polizzi was going to cut during a gender reveal party for her second child with new husband Roger Mathews.

And the next day, she showed off the results on Instagram indicating that the Jersey Shore alum would be having a boy!

Nice to have a pair just like her BFF Snooki who has a 3-year old son Lorenzo and 1-year old daughter Giovanna Marie with her husband and Jersey Shore cast mate Jionni LaValle.

“I’ve always said I wanted a boy. I think there is something to be said about a mother-and-son bond,” she explained. “My pregnancy has been going so great that it’s making me wonder if I’m having a boy. My first pregnancy was super rough; I felt like I was on a boat the entire time. But this time I feel great, so we’ll see.”

Another MTV  Jersey Shore cast member has gone from wild, reckless party girl to a settled mom and wife!

This Weekend, Jennifer “JWoww” Farley married her longtime beau Roger Matthews who is the father of  her 14-month old daughter, Meilani.

E! News reports that the couple revealed during the wedding night party that JWoww is expecting their second child

“By far one of the best days of our lives outside Meilani being born,” the couple said to E! News shortly after their wedding. “So blessed to have our daughter share this day with us!”

Meilani served as the flower girl for the event, the entertainment website reports.

JWoww and her bestie Nicole “Snooki” Polizzi were featured cast members of the long running show about young adults that vacationed on the Jersey shore for the summer and a spin off about their new more domestic lives called Snooki and JWoww.

Snooki has announced that she will focus on her role as a mom for a while. She and her husband Jionni LaValle are parents to one-year old daughter Giovanna Marie and 3-year old son Lorenzo Dominic. The two married last year in November, a few months after their second child was born. JWoww was one of 15 bridesmaids at the “Great Gatbsy” themed wedding.

They are following in each other’s footsteps because JWoww too has said she will become a full time stay at home mother.

Congratulations to Nicole “Snooki” Polizzi on the birth of her second child, a daughter, with fiance Jionni La Valle.

The couple, who are parents to 2-year old Lorenzo, named the newest arrival Giovanna Marie.

So happy to let you know we had our beautiful daughter this morning Giovanna Marie LaValle. 6.7 lbs, full head of black hair & perfect

Congrats to Jenni “JWoww” Farley and her fiance Roger Matthews on the birth of their first child together, a daughter, E! News reports.

The couple, who both starred on the MTV reality TV show Jersey Shore, named the new arrival Meilani Alexandra Matthews.

JWoww currently stars in a spinoff Snooki and JWoww with her bestie Nicole “Snooki” Polizzi who is also expecting her second child with fiance Jionni LaValle. 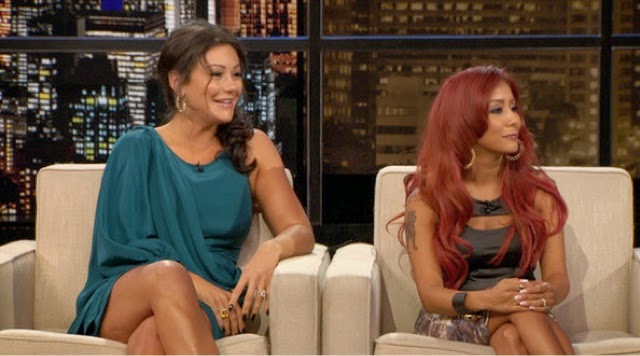 Nicole “Snooki” Polizzi got her wish about being preggers as the same time as her Jersey Shore bestie Jenni “JWoww” Farley.
She told  US Weekly that she and fiancé Jionni LaValle are expecting their second child. The couple is already parents to 19-month old Lorenzo.
And it was a little bit of a challenge to conceive but not that much.
“Jionni and I were trying to have our second baby since November, so every month we kept taking tests,”  she told the mag. “I’m due in the fall around my wedding time. Busy year!”
The Snooki and JWoww star of the MTV reality TV series said she has no plans of putting off her wedding because of the pregnancy.
“I can clarify that our wedding is still on, and we are madly in love with each other,” she said, “We’ve waited long enough and cannot wait.”
To avoid the 27 hours of labor she endured for her first delivery, the pint-sized NY Times best seller said she planned to eat healthy and continue working out with her trainer sensibly.
She said she wants to look good in her wedding dress even while pregnant.
0 comments