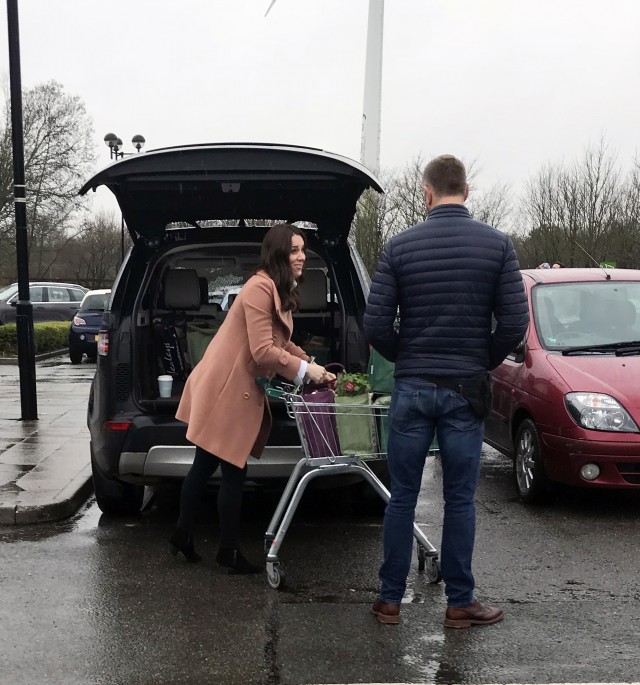 The 36-year-old Duchess of Cambridge, who is expecting her third child with husband Prince William in the coming weeks, was spotted casually grocery shopping in a Waitrose supermarket in the small town of Swaffham, England, earlier this week.

The pregnant Duchess looked chic in a blush coat, black pants, a white shirt and black booties. Her hair was down and she wore minimal makeup while on her regular outing. Kate was accompanied by her metropolitan police protection officer, who stood aside and watched as she pushed her own cart and loaded reusable shopping bags into her SUV.

Some in social media are claiming that Kensington Palace‘s newly released photo of the Royal Family was photoshopped.

They point to Charlotte and claim that the areas around her shoulder are fuzzy but her face is clear. Others claim that because she is wearing the same dress as in the last photo the Palace released in November that she was perhaps inserted into the photo instead of being naturally in that one. The thinking is that the Royals didn’t want a fussy infant to mess up their otherwise “perfect” photo.

Ok beautiful but serious question did they photoshop Charlotte’s smiling face onto her body bc I’m thinking yes https://t.co/S0ZanmTYSv

Looks like Princess Charlotte was not playing ball with the Christmas card, definitely some photoshop going on pic.twitter.com/soFeZ3pP2a

First, it is possible the recently released photo was taken on the same day and during the same photo session as the one released earlier.

Second, Charlotte is wearing what looks like a fuzzy angora sweater perhaps, which would clearly explain why it looks blurry in the photo.

Finally, the photo is NOT perfect. Charlotte’s shoe is missing because it has fallen off and is on the grass. Prince William is not even looking at the camera but at his son, perhaps in a moment of telling to not run off, or something. William looks to have forgotten to put on his wedding ring. Kate’s hair is a bit windswept and out of place.

Kensington Palace basically laughed at the rumors and Buzzfeed‘s request for comment, though they had no official comment, just laughed their heads off.