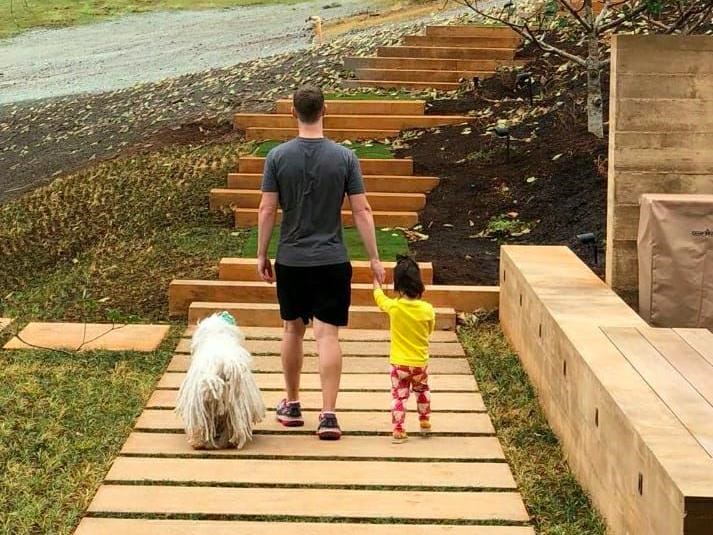 Facebook CEO Mark Zuckerberg and his pediatrician wife Dr. Pricilla Chan welcomed  their second daughter, August, ironically in the month of August. That month, he took a month of paternity leave off and he is off again for another month!

“I’m going on parental leave for December to be with August and Max, so you’ll hear from me a little less,” hecaptioned a photo of himself and older daughter Max and their dog walking away. “We have a couple more Facebook and philanthropy announcements this year and then I’ll see you all in 2018!”

Photographs of Zuckerberg during his time off emerged on Daily Mail, where he is seen relaxing in Hawaii.

Consider the fact that America is the only industrialized nation which doesn’t mandate paid leave for mothers of newborns. Of course, plenty private companies offer the benefit to new moms but it isn’t required by law.  The concept of paternity leave is catching on and mainly among tech companies and other major companies.

Coca-Cola, American Express, and EY all offer paid parental leave. At Facebook, employees, regardless of gender, get four months leave after the birth of a child, a generous benefit by American standards.

Read more about the break at Business Insider

He also announced that the new baby is a girl as well and expressed delight about being the dad to two little princesses.

“Priscilla and I are happy to share we’re expecting another baby girl!” he captioned several photos of himself with his sisters and Priscilla and her sister. “After our difficult experience having Max, we weren’t sure what to expect or whether we’d be able to have another child. When Priscilla and I first found out she was pregnant again, our first hope was that the child would be healthy. My next hope was that it would be a girl. I cannot think of a greater gift than having a sister and I’m so happy Max and our new child will have each other.”

He continued to chime in about the strength of women.

“I grew up with three sisters and they taught me to learn from smart, strong women,” Zuckerberg stated. “They weren’t just my sisters but some of my best friends. They’ve gone on to write books, excel at performance, music, sports, cooking and their careers. They showed me how to compete and still laugh together afterwards.”

Famed COO Sherly Sanberg chimed in her well wishes along with the many others:
0 comments

“Most people don’t discuss miscarriages because you worry your problems will distance you or reflect upon you — as if you’re defective or did something to cause this. So you struggle on your own.”

Facebook Co-Founder and CEO Mark Zuckerberg wrote this about he and his wife Pricilla experiencing multiple miscarriages before finally announcing  a pregnancy that will likely go to term.

Miscarriage is such a big taboo and as we’ve written here  often in Bellyitch. Having people of influence like the Zuckerbergs and other celebrities share their journey makes it easier for others not in the limelight to realize they are not alone. It can be a starting point. Kudos for Mark Zuckerberg and Pricilla Chan for being so open.

Elizabeth Cohen, an award-winning senior medical correspondent for CNN’s health, wellness and medical unit, and author of “The Empowered Patient“, wrote about how the announcement and revelation impacted her and how she feels it will help others.

After years of struggling, several miscarriages and losses, Facebook billionaire Mark Zuckerberg and his wife since 2012, Pricilla Chan are expecting their first child together.

The billionaire CEO and co-founder of the popular social network announced the news, naturally, on his Facebook page:
“Priscilla and I have some exciting news: we’re expecting a baby girl!” he said.

“We’ve been trying to have a child for a couple of years and have had three miscarriages along the way,” he said. “You feel so hopeful when you learn you’re going to have a child. You start imagining who they’ll become and dreaming of hopes for their future. You start making plans, and then they’re gone. It’s a lonely experience. Most people don’t discuss miscarriages because you worry your problems will distance you or reflect upon you—as if you’re defective or did something to cause this. So you struggle on your own.”

He added that he hopes his news will encourage others who have faced loss.

“Our good news is that our pregnancy is now far enough along that the risk of loss is very low and we are very hopeful,” he said. “Cilla and our child are both healthy, I’m extremely excited to meet her and our dog Beast has no idea what’s coming.”

Priscilla and I have some exciting news: we’re expecting a baby girl!This will be a new chapter in our lives. We’ve…