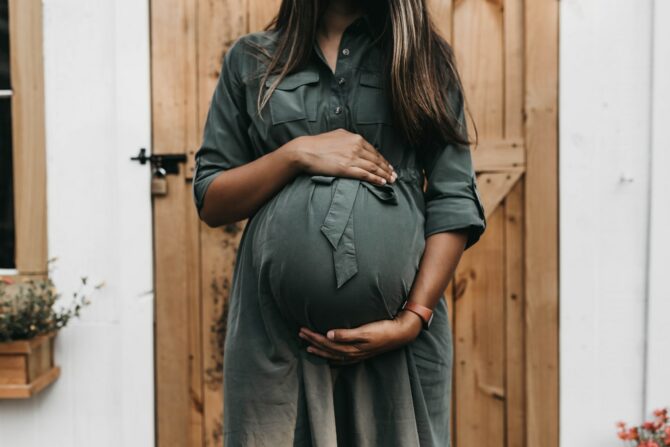 NTP scientists evaluated published research on the link between traffic-related air pollution, or TRAP, and hypertensive disorders broken down by pollutant measurements of TRAP, such as particulate matter (PM2.5). PM is the term for a mixture of solid particles and liquid droplets found in the air, and PM2.5 refers to fine inhalable particles, with diameters that are generally 2.5 micrometers or smaller. The average human hair is about 70 micrometers in diameter, about 30 times larger than the largest fine particle.

“What we found when we reviewed the literature is that exposure to PM2.5 from traffic emissions was associated with development of hypertensive disorders in pregnant women,” said Brandy Beverly, Ph.D., lead scientist and researcher at the National Institute of Environmental Health Sciences, part of the National Institutes of Health. “When these women are exposed to PM2.5 during their entire pregnancy, the likelihood of developing preeclampsia increases by about 50%.”

Other components of TRAP that NTP evaluated included nitrogen oxides, carbon monoxide, black carbon, and elemental carbon, along with parameters like traffic density and mothers’ proximity to main roads.

For example, the literature suggests that women who live within a quarter of a mile of a major roadway or in high traffic density regions may be at an increased risk for developing hypertensive disorders of pregnancy.

TRAP comes from the combustion of fossil fuels by motor vehicles. These vehicle emissions are mixtures of gases and particles that are easily inhaled and have adverse health effects. TRAP is known to be a major risk factor for cardiovascular disease, including hypertension.

Hypertensive disorders of pregnancy complicate more than 10% of pregnancies worldwide and are a leading cause of maternal and fetal illness and death. According to the American College of Obstetrics and Gynecology, mothers with hypertension during pregnancy are more likely to have a pre-term delivery. Their infants are at greater risk for low birthweight and a range of long-term health problems associated with pre-mature birth.

“Hypertensive disorders of pregnancy refer to a range of clinical conditions, all of which include high blood pressure during pregnancy,” said Beverly. “The disorders are classified into four distinct types, based on differences in the timing and onset of the symptoms.”

According to the National Institutes of Health, on any given day one-third of children and 41 percent of teens eat from a fast-food restaurant. They also report that the restaurant meals often served to kids contain too many calories. The typical “kid food” being offered tends to usually include chicken nuggets, fries, macaroni and cheese, burgers, and pizza. The problem is that these meals often provide empty calories and don’t provide enough nutrition. They also keep the kids wanting the same types of foods at home, with parents often providing them. One expert, Doctor Yum, says it’s time to ditch the “kid food” and start giving kids better options.

“Most food is kid-friendly. Kids just need to learn how to eat it,” says Dr. Nimali Fernando, a Fredericksburg, Virginia-based pediatrician who founded The Doctor Yum Project. “Kids who are taught healthy eating habits, which include eating a variety of healthy foods, will be far better off now and in the long run. They will be learning healthy habits that will last a lifetime.”

Here are 6 reasons to ditch the pizza and pouches and get your kids back to real food:

“If kids can get involved in the food process, from shopping to preparing it, and they can learn about why eating healthy is so important to them, they are more likely to do so,” adds Heidi DiEugenio, a director at the Doctor Yum Project. “This will help them avoid the obesity problems, chronic health issues, and they will have a better opportunity to live a healthier life throughout their adulthood.”

According to the Centers for Disease Control and Prevention, healthy eating habits can help children maintain a healthy weight, as well as reduce their risks of such conditions as heart disease, cancer, diabetes, iron deficiency, dental cavities, osteoporosis, and high blood pressure. An unhealthy diet, on the other hand, can lead to being overweight or obese, increase risks for certain types of cancer, and negatively affect overall health, cognitive development, and a child’s school performance.

Just when you didn’t think it could get any worse, it gets worse.

A recent Yale University study discovered that the Zika virus may live in the vagina for days after infection. Researchers studied the vaginal tissue of pregnant lab mice several days after infection, the virus spread and infected the fetal brain and development but it also replicated itself robustly in the female reproductive tract more than at other sites of infection. The consequence of that rapid replication could be dire for reproduction.

The researchers found that the Zika virus replicated in the vagina and persisted post-infection.

“We saw significant virus replication in the genital tissue, up to 4-5 days. With other routes of infection, theZika virus does not replicate unless you block type I interferons. What surprised us most was that the virus replicated in the vagina of wild-type mice with intact interferon response,” said Akiko Iwasaki, professor of immunobiology and investigator of the Howard Hughes Medical Institute. “The finding may be important for women, not only pregnant women,” said Iwasaki. “The vagina is a site where the virus can replicate and possibly transmit to partners. In pregnant women, vaginal transmission of Zika virus may have a significant impact on the developing fetus.”

The study is also significant given the fact that, according to reports, Zika virus can also persist in semen up to 180 days post-infection, notes the Yale researcher. In addition, a recent report indicates that there can be a female-to-male transmission of Zika virus after vaginal intercourse. Combined, these studies paint a broader picture about the virus generally for those trying to eradicate and prevent it from spreading.