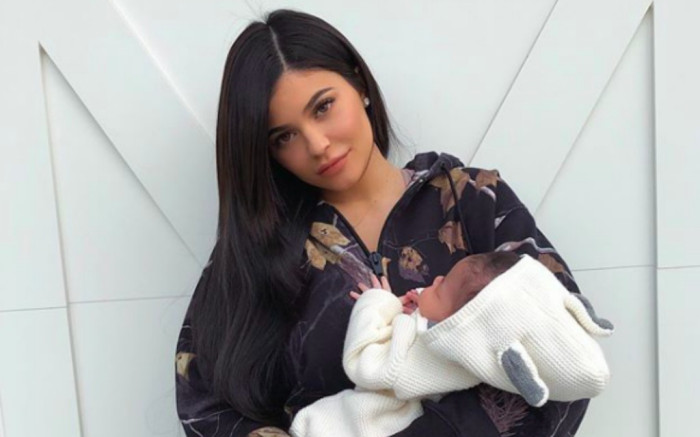 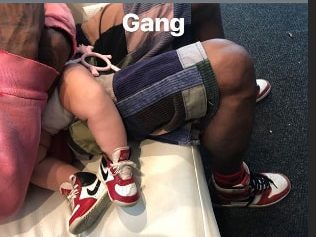 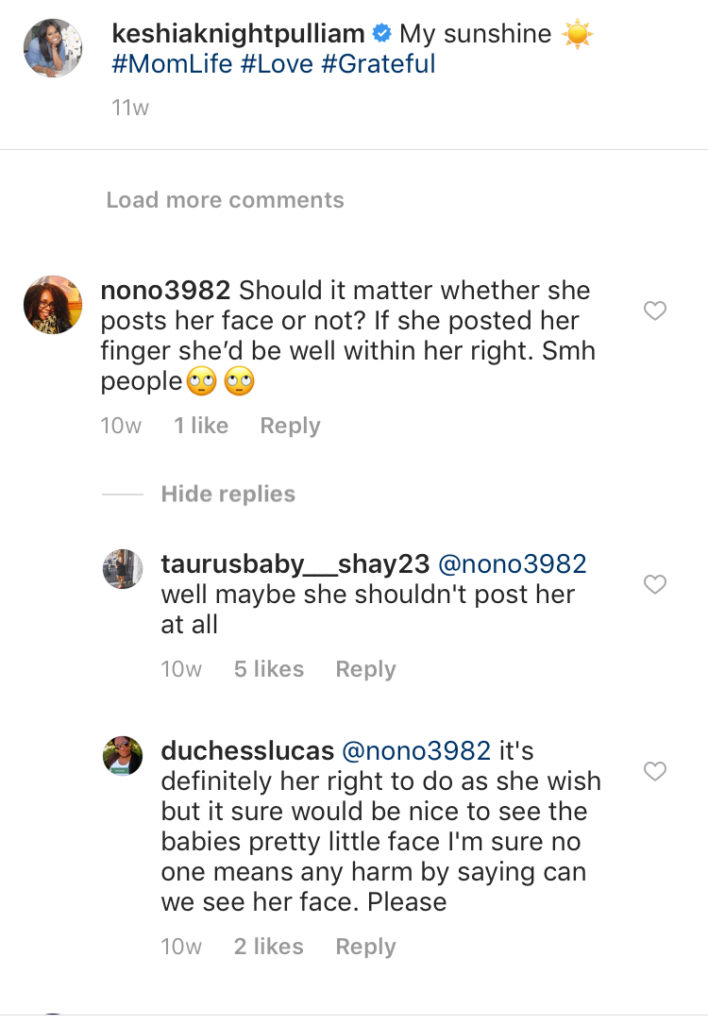 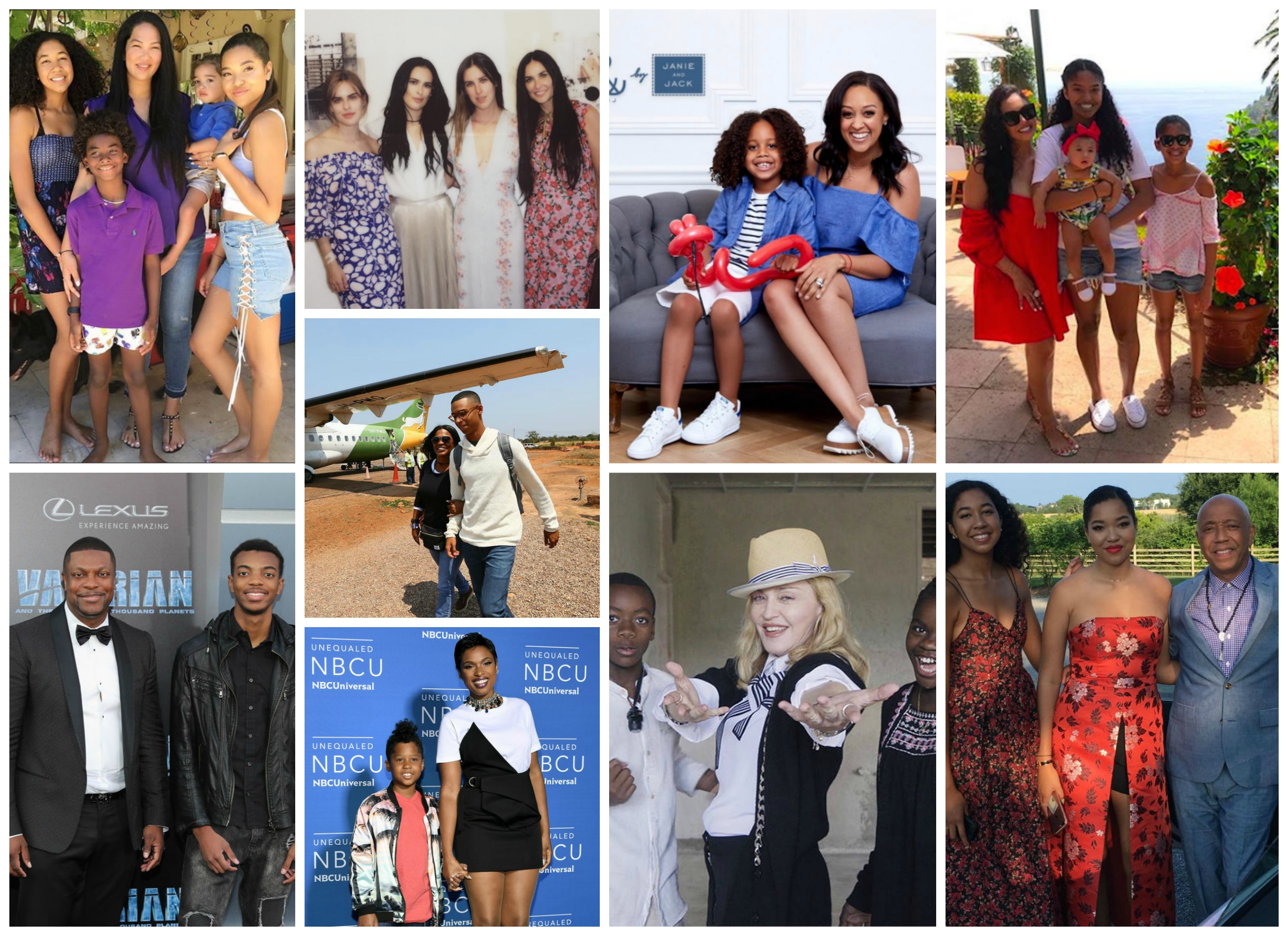 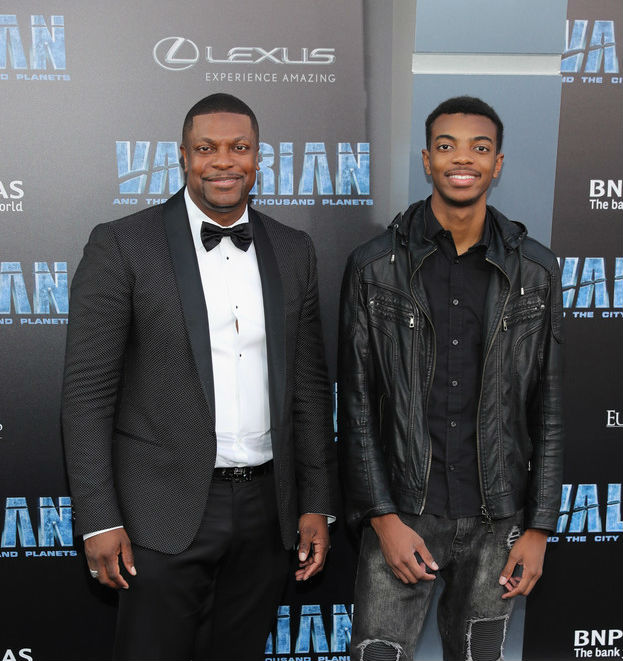 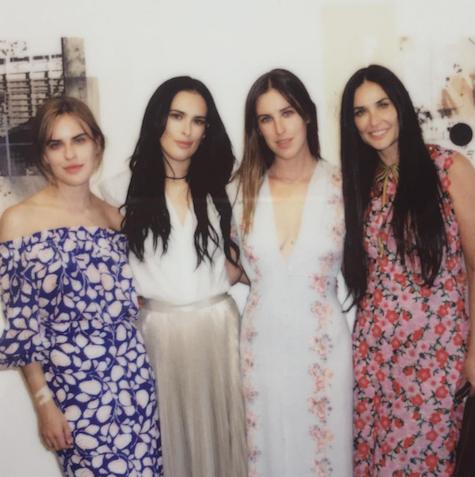 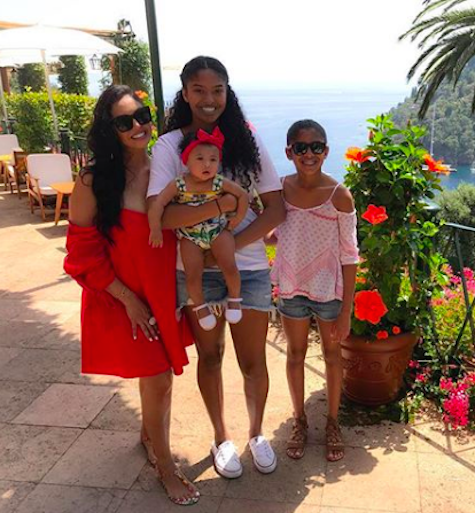 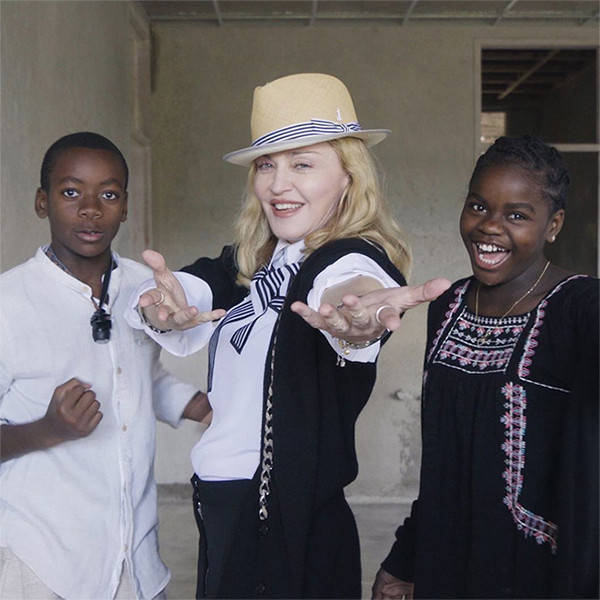 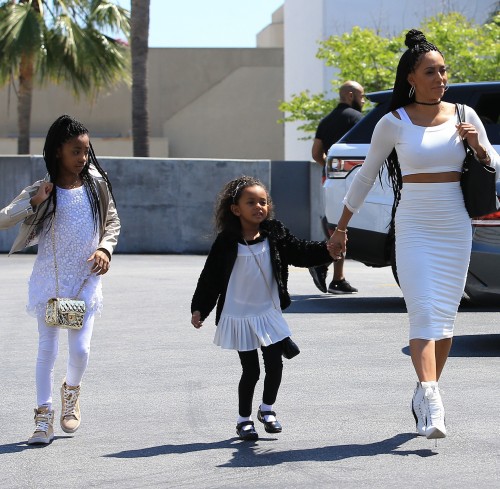 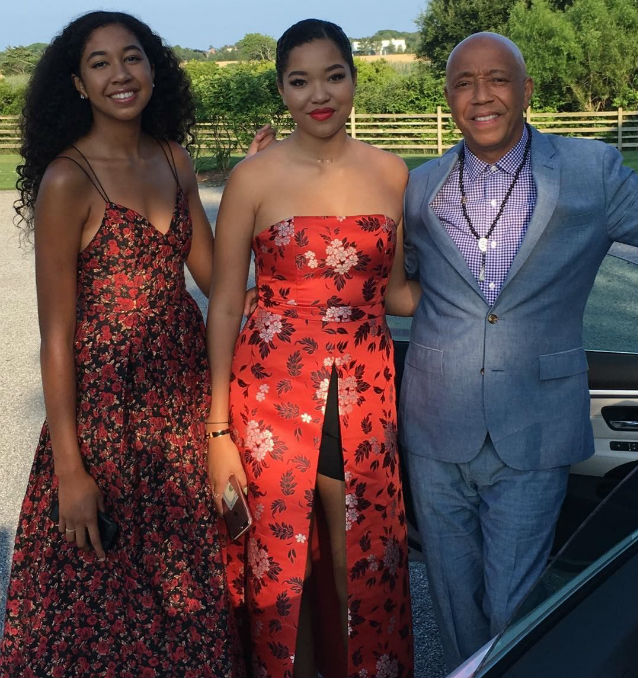 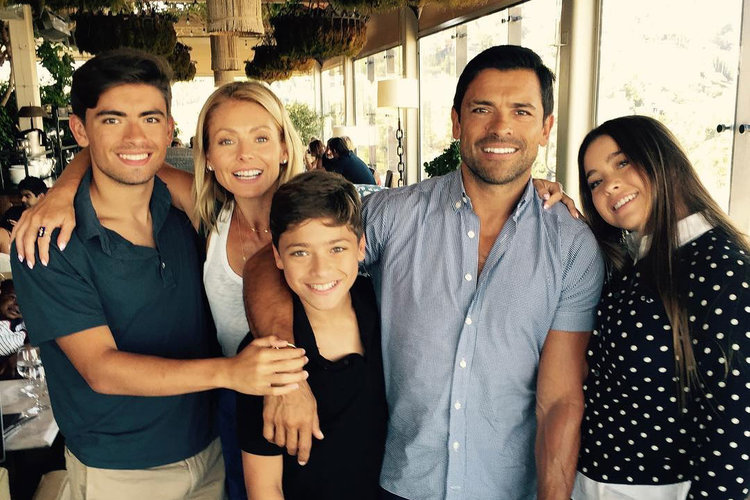 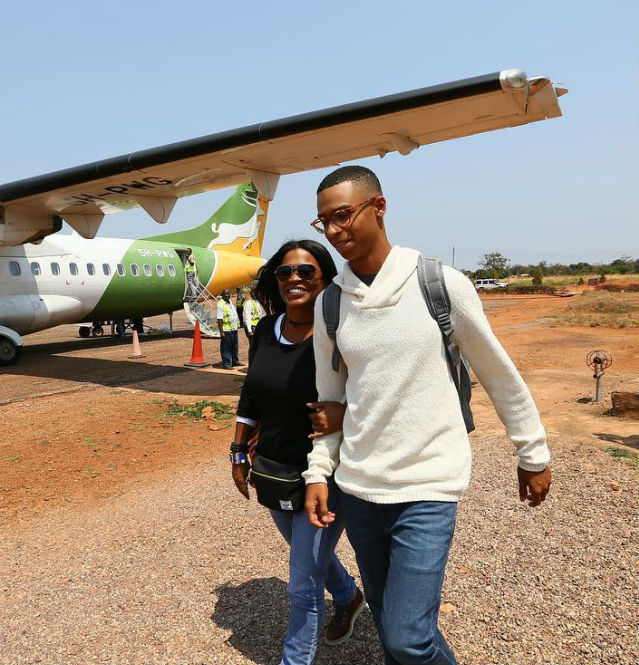 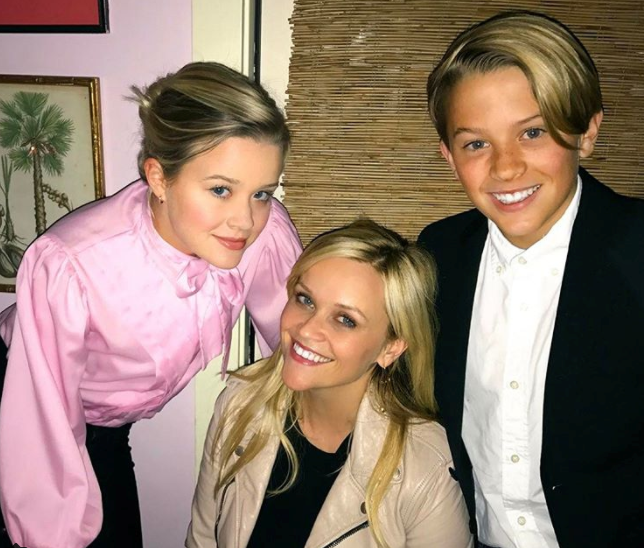 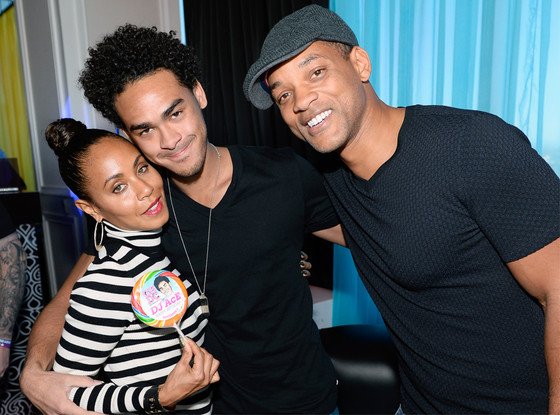 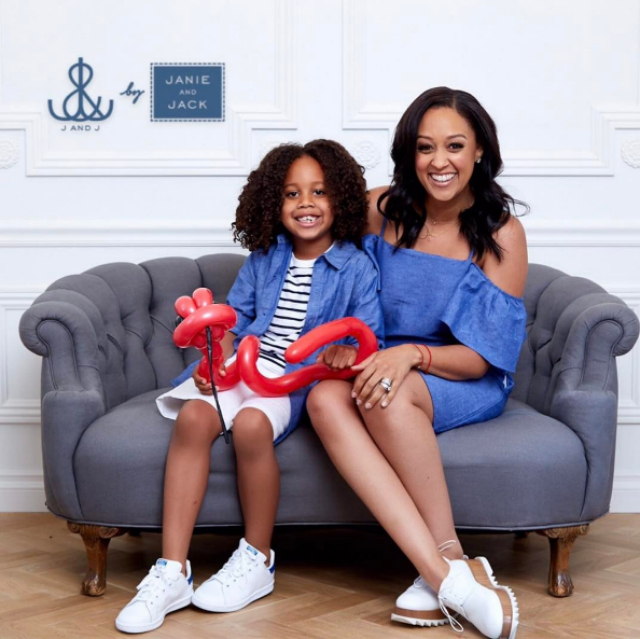 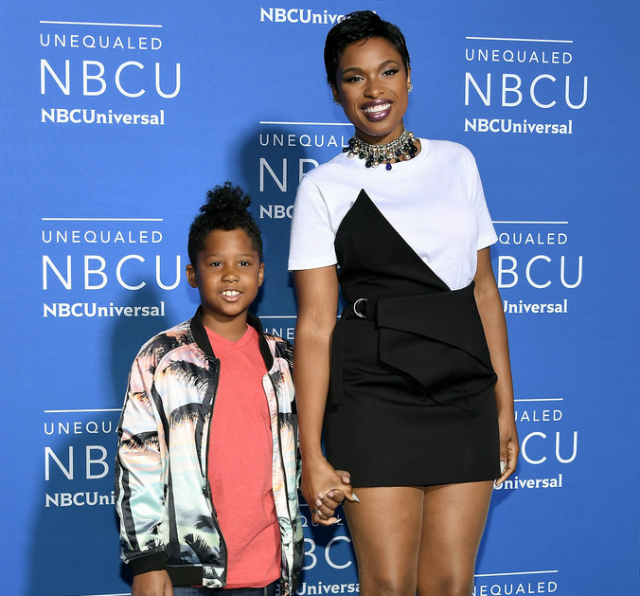 Angela Simmons debuted her son Sutton Joseph on Instagram and this Monday on The Real will finally stare a public space with  fiance, Sutton Tennyson.

The brand new mom had previously kept her relationship and her fiance secret but Tennyson will bring out the couple’s newborn baby to the set to greet mom Angela while she his having a guest hosting stint on the TV panel talk show on FOX.

Tennyson and son emerge from behind the stage wearing matching double denim outfits. When asked how it feels to be a dad Tennyson replies, “It’s wonderful — best feeling ever.”

Tune in Monday and check your local listings for showtimes and channels.

Be sure to tune in Monday @therealdaytime !!! I will be co-hosting !!! Can’t wait!! See you there ❤️

Here is a snippet of the upcoming show:Also, Simmons has been sharing tender moments of her son meeting Angela’s media mogul uncle Russell Simmons and her cousins on social media lately.

What a gorgeous baby! Congrats again to the beautiful family.

Kimora Lee Simmons‘ first two children, daughters Aoki Lee and  Ming Lee have grown to be beautiful young ladies, but having grown in the overly critical public eye has not been easy. This is especially true considering the overemphasis of beauty for young women and how mean the public can be. Social media has been a blessing and curse for celebrities.

On one hand, it gives them access to fans and helps them prove their brand relevance and importance by enabling them to quantify fans.  It can be used as a tool to keep them famous and relevant. On the other hand, social media make it too easy to get direct contact with people in the public eye and along with the good of being able to show off their  filter-free and authentic selves, celebs also open a window and let in all the insecure, petty, jealous and downright meanies who love to troll and diss them too.

And people do not stop when it comes to commenting on the beauty of a celebrity child.

For example, I was doing some online research recently and bumped into Aoki Lee’s Instagram page. I immediately noticed that she doesn’t ever show her face in any of her photos. Now it could be because she wants to de-emphasize her looks seeing as though she is a self-described historian and coder on her page.

It is a contrast from her sister Ming who is as statuesque as their mom and is perfectly fine flossing and showing off her fab self and her fab life that goes with on her Instagram.

But then I thought that perhaps Aoki hides her face to shield herself from all the negativity that litters the comment section under celebrity social media pages. It’s the type of stuff that has led many to quit social media.

I remember bumping into a lot of shady comments about Kimora’s daughters’ looks on the gossip blogs.

Thus, there is no wonder some celebs elect to hide their children’s faces from the public. You’ve never even ever seen Kerry Washington or Eva Mendes’ children… ever.

And as I moved over to Ming Lee’s photo, I see that one of the first comments on a really beautiful beach photo comes from a couple of girls calling her ugly and talking bad about her looks.  Most people however reply about her beauty in most of her posts.

And that is a shame that all we care about is the attractiveness of famous people.

It also explains why Beyonce famously shielded her daughter Blue Ivy‘s face when she shared photos of her during her infancy to toddler years. Zoe Saldana is yet to share a photo of her twin boys, Cy and Bowie,  either. Over the pond, singer and TV presenter Rochelle Humes features many snaps of her daughter on Instagram but none of her face.

And those who do like Tia Mowry and Solange Knowles have found themselves having to snap back and put mean trolls in their place who called both their sons ugly, as recently as last year.

Celeb parents can do what they can as long as they can to shield their kids from public scrutiny for as long as possible. It is essential considering the kids never asked for the spotlight. But…the minute they grow into their own and open up their own social media account, they”ll have to face it on their own.

And Aoki’s faceless Instagram page could be an example of one outcome. 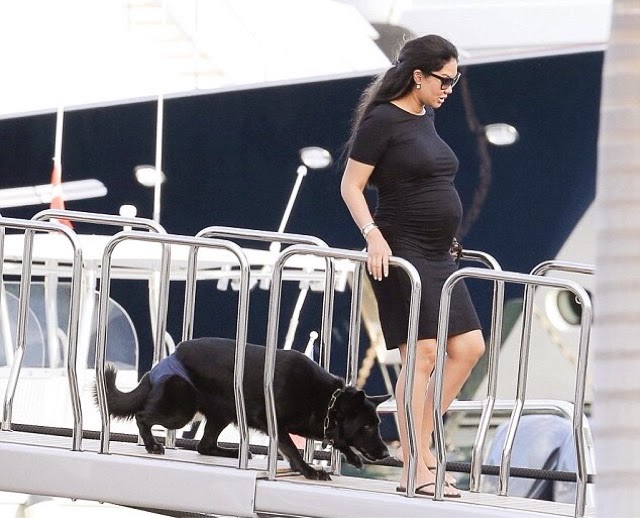 Paps caught Kimora Lee Simmons on a yacht in St. Bart’s this week in a black bump hugging scrunching mini dress, flip flops and Jackie-O glasses.  News leaked in October that Simmons was on  her fourth pregnancy, first with her banker husband Tim Leissner in October.
The sometimes reality TV star and Leissner have been married since February.
The former model turned designer and fashion mogul has two daughters, 14-year old Ming and 12-yar old Aoki with first husband Russell Simmons and son, Kenzo with actor Djimon Hounsou, with whom she was married for 5 years.
h/t Daily Mail
0 comments

Simon Cowell isn’t the only celebrity to welcome a baby on Valentine’s Day!
Reality TV star of MTV‘s Run’s House actress Vanessa Simmons and her beau Mike Wayans welcomed their daughter, Ava Marie Jean Wayans.
Her great uncle Danny Simmons revealed the news ahead of the family.
“My brand spanking new Grand niece is named Ava Marie Jean Wayans…you go mommy,” he shared on his  Facebook page, later writing, “Ooops didnt know I bleeped it out early.. yall wuz the first to know..well except for the immediate fam…u guys got the scoop”
Simmons announced the pregnancy via her Instagram page this past September 2013.
It’s Hip Hop/Black Hollywood royalty as Simmons’ dad is the legendary rap artist Rev Run of the iconic 80s group Run DMC and her uncle is hip hop clothing (Phat Farm) and music (Def Jam) business mogul Russell Simmons whose ex-wife Kimora Lee Simmons we’ve “bumpwatched” before too. Vanessa’s brother Diggy Simmons is a R&B charttopper as well.
Wayans‘ dad is TV vet comedian Damon Wayans (My Wife and Kids) whose family includes actor director/producer Kennon Ivory Wayans (In Living Color), actor/filmmaker Shawn Wayans (White Chicks, Scary Movie) and actor/filmmaker (The Wayans Brothers, Little Man).
Congratulations!
This is the first child for the couple. Simmons also starred with her sister model, actress and designer Angela Simmons in a few seasons of the MTV spin-off Daddy’s Girls.
0 comments
Actress and reality TV star Vanessa Simmons  shared a photo of herself and her blossoming belly to her Instagram fans recently.
“First lunch meeting of 2013,” the MTV star from Run’s House  and Daddy’s Girls captioned the photo.
Simmons’ dad is Hip Hop legend Rev Run and uncle is business mogul Russell Simmons. She announced in September 2013 that she and  boyfriend Mike Wayans, son of veteran TV actor Damon Wayans are expecting their first child together.
She’d been MIA for months due to extreme morning sickness. She told Essence.com that cherry-flavored Slurpees are her weakness.
“Every time my mom calls me she asks, ‘Where’s Mike?’ and I’m like, ‘He’s at 7-Eleven,” she confessed.
Simmons also noted that she’s not rushing down the aisle just yet.
“I don’t want to be a pregnant bride,” she told the site. “I wanna have a beautiful wedding, hopefully a destination wedding where I can show off my figure in a beautiful long flowing dress.”
0 comments