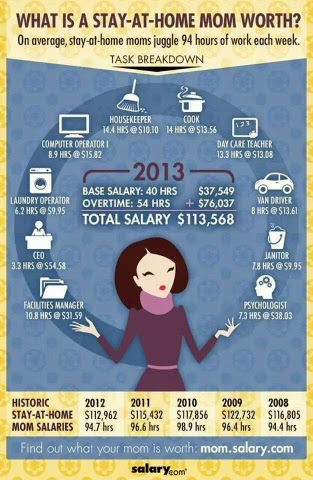 Saw this infographic from Salary.com which itemizes the would-be pay for stay at home moms over a 5 year period from 2008 to 2012.
It estimates that in 2012, a SAHM would earn $112,916 if she were paid in cash for her labor
That does not include overtime hours.
This is great to keep around for the next time someone tries to devalue all the work SAHMs do in the home!
Ha! What do you think? Agree? Think it’s too low or high?
0 comments

“Many mothers find it difficult to raise a family and try to run a business because both the children and the business take a lot of time all by themselves,” an article on the Top 3 Reasons Mothers don’t Start Up in ParentStartup.com states. Another New York Times piece and another  recent article talked about how Venture Capitalist discriminate against mothers.
From that NYT piece:

“[M]uch of the investment world, heavily dominated by men, remains skeptical about a woman’s ability to combine running a fast-growing tech start-up and motherhood, Ms. Gugnani says. She raised $3 million from investors before becoming pregnant.

“All of the women I know who went to raise money did it when they didn’t have kids,” she says. “There is total discrimination in the start-up world against women who are pregnant.”
Making pregnancy and motherhood a focal point of the investment process is an outdated way of thinking, she adds.

Female entrepreneurs are less numerous and raise less money than their male counterparts. Women make up 10 percent of the founders at high-growth tech companies, “and they raise 70 percent less money than men do because of their lack of access to capital,” says Lesa Mitchell of the Ewing Marion Kauffman Foundation, where she is vice president for initiatives on advancing innovation.”

And so, the “Start-up mom” joins the Mommy Wars.

Moms are opinionated and each one believes her method or solution is tops. Of course, to each its own but that doesn’t stop those who have hard-fast thoughts on one thing from speaking up and trying to convince others this. They will not be silenced. They may bully others into their perspective.


Another mommy battle is the battle between Stay-at-Home (SAHM) versus Work-at-home (WAHM) versus Working Moms. Working moms often feel SAHM guilt trip them over spending less time with their children. Meanwhile, SAHMs say they feel belittled by Working Moms who assume they do nothing all day but eat bonbons while their kids are at school. Working Moms say SAHMs are privileged enough to not have to work yet judge those harshly who do. Work-at-home moms say they have the best and worst of each scenario.

Now that the Start Up mom has been brought into the picture, as a work-at home Start up mom, I proffer that the Start-up or Entrepreneurial mom has it THE HARDEST.

Why?
While start up moms do have the luxury of being able to chaperon school field trips, attend school meetings and take our kids to the library as I do daily, they also have the challenge of having to clean the home, provide meals, and be a homemaker all while not bringing income but expected to.
Unlike the SAHM who is not expected to bring in external income, the Start-up mom has to contribute to the family expenses.
Unlike the Working Mom or Work-at-home who is working for a company and at least bringing in guaranteed income, the Start-up mom works for no one and has to go out and generate income from independent sources.
The Start-Up Mom has to bring home the bacon by working 50 hour weeks trying to build a company that makes little to no money that may never be successful enough to generate income or funding.
And she has a tough haul raising money to fund her venture, considering that recent Business Insider story revealing how the VC industry discriminates against mothers.
It’s a hard uphill battle to bear along with the other family responsibility on our backs.
Yeah, we have it the hardest!
What do you think?