Congratulations to actress and model Molly Sims on the birth of her third child, a baby boy on Tuesday, January 10, who posted a photo of herself with her newborn on her Instagram page. She also announces his name which is very mature and Statesman-like in our opinion.

“???Welcome to the world Grey Douglas Stuber 1.10.17,” Sims captioned an adorable image of her toting the newborn. “Words do not express how grateful and happy we are to have another piece of magic added to our little tribe! #blessed ?#tribeof5.”

???Welcome to the world Grey Douglas Stuber 1.10.17 Words do not express how grateful and happy we are to have another piece of magic added to our little tribe! #blessed ?#tribeof5

We just posted her “any day” now post AFTER she had already given birth.

Third-time mom-to-be Molly Sims is expecting to deliver any day now. That is according to an Instagram post she made on Monday.

Last week, the 43-year old actress-model posted a photo of herself holding her 21-month old daughter Scarlett with her 4-year-old son Brooks kissing her baby bump.

Belly loving babies! ? My 10 tips to prepare your kids for a new sibling {link in bio}

Sims and her  movie producer husband Scott Stuber, are expecting a son this time around. In August, Sims announced her third pregnancy. Godspeed for a safe labor and delivery, Molly!

Congratulations to Model and best-selling author Molly Sims who welcomed her second child, a daughter yesterday.
Sims and her husband Scott Stuber named their new edition, Scarlett May Stuber.  She announced the news on her instagram account.
The new arrival joins the couple’s son 2-year old son Brooks.

We welcome Scarlett May Stuber into our family. Our hearts are bigger with you here. http://bit.ly/1bzdc9f {Image credit: @gcanali}
A photo posted by Molly Sims (@mollybsims) on Mar 26, 2015 at 5:28pm PDT

So sweet and beautiful! Congrats!!!

Actress, model and author Molly Sims had a fab baby shower to celebrate her expectant baby girl that she is due to deliver. Celebrity attendees included our past Bellyitch Bumpwatch moms Rachel Zoe, Ali Larter and Vanessa Lachey.

Sims and husband Scott Suber  are parents to 2-year old son Brooks. This will be the second child for them both. Here aresome of the photos Sims shared on her website post “Showered with Love”:

See the other photos and what else she had to say about the occasion here!

Actress, model and author Molly Sims covers the February edition of Fit Pregnancy.  She also covered the mag in 2012 when she was pregnant with her 2-year old son Brooks.
The mom-to-be gave some great insight to the life of the 2nd time pregnant woman in her cover interview.
She shared how this pregnancy has been easier even though she said she had morning sickness all day this round and only in the evening with her first.
The author of the new Amazon bestelling book, “Everyday Supermodel: My Beauty, Fashion, and Wellness Secrets Made Simple” said she has learned “not to freak out over every single symptom,” and to be more practical, adding “now I know exactly how many onesies I need when the baby arrives. I don’t have the anxiety of being a first-time mom. Moreover, I know to wear my Spanx tights when I go out, and my T.E.D. compression hose when I fly to prevent blood clots.”
She also realized that being too hung up on wanting to realize a baby plan is not realistic.
“First, I had a velamentous cord insertion [when the umbilical cord inserts into the fetal membranes rather than the middle of the placenta, causing a higher risk of rupture],” said Sims, who is married to hubby Scott Stuber. “The doctor monitored me closely throughout the pregnancy, and I had a scheduled C-section to protect the cord, which was necessary, but disappointing. This time, I don’t have the same condition, so I’m not opposed to a VBAC [vaginal birth after Cesarean].”
Imperfect can be perfect.
Read the entire interview at Fit Pregnancy  HERE or pick it up at newsstands!

The 2015 Golden Globe Awards and the pre and post show events gave us plenty of red carpet bumps to gawk at…
Here are the ladies we’re following and what they word:
Keira Knightly, who was nominated for her role in The Imitation Game, wore a light and feminine custom Chanel buttefly print slip dress with tiered ruffles at the bottom from the line’s pre 2015 collection, belted above the bump with a frilly lace bib along the neckline. She accented the look with a butterfly bracelet and black clutch. Knightly and her husband, James Righton, a keyboardist for the group The Kaxons, are expecting their first child this year.
Tamera Mowry-Housley went va va voom with a high slit one shoulder Michael Kors dress, Kimberly McDonald jewels, Kelly Wearstler clutch and silver strappy Badgley Mischka heels while attending the NBCUniversal 2015 Golden Globe Awards Party sponsored by Chrysler at The Beverly Hilton Hotel. Mowry-Housley and her husband Adam Housley are expecting their second child, a daughter. The couple are parents to 2-year old son, Aden.
Molly Sims hit up the InStyle Post-Golden Globe party in a sunny yellow Lisa Perry Schumacher 1889 gown. Love the ethnic-inspired embroidered trim to this dress. Sims and her husband Scott Stuber are expecting their second child. They are parents to 2-year old son, Brooks.

TV host Terri Seymour also played up her sensual side a bit in a black Yosep Sinudarsono  Yotuz Collection dress, accented with jewels from XIV Karats Beverly Hills, while attending the Weinstien Company and Netflix Golden Globes After Party. Seymour, well known for being a longtime girlfriend of Simon Cowell, is in her last trimester of her pregnancy. She and beau Clark Mallon are expecting their first child together.

All the ladies looked absolutely beautiful in our book! 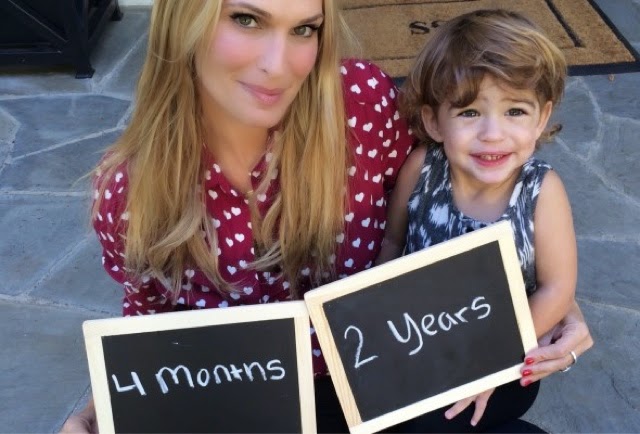 Add ex model Molly Sims to the extensive celebrity who had a baby after 40 club!
The gorgeous 41-year old blonde announced on her website today that she  and her husband Scott Stuber are expecting their second child.
The couple are parents to 2-year Brooks.
“Scott, Brooks, and I are welcoming a fourth member to our little family – our second child!” she wrote as the title of her entry along with this cute announcement graphic.
Congrats!
0 comments