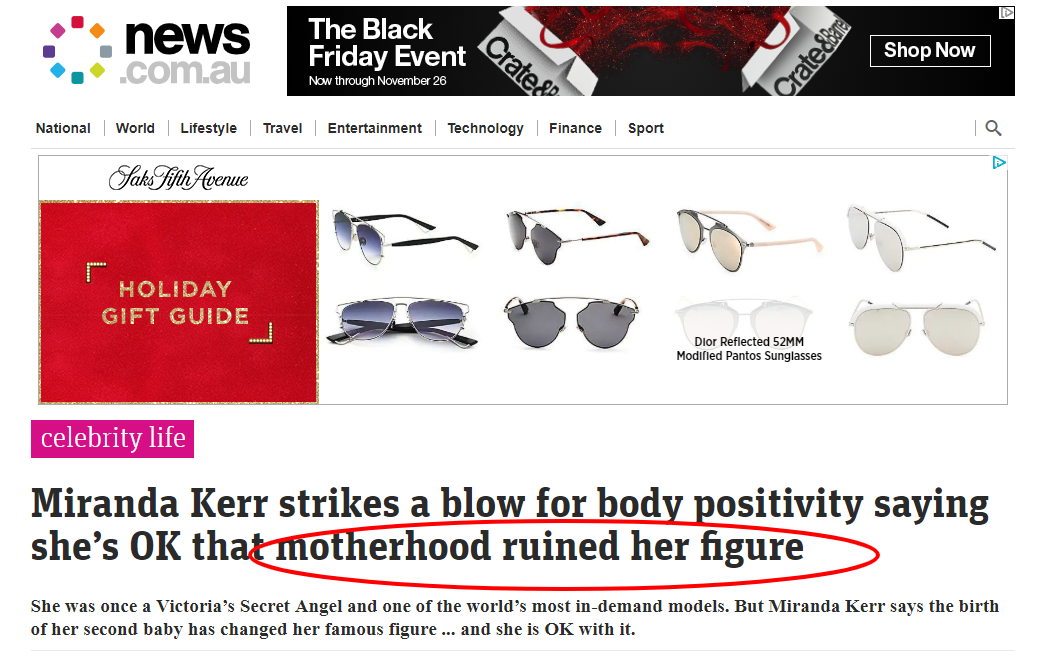 I was online and an article from an Australian news mag, news.com.au,  scrolled through my feed with an article discussing Australian super model Miranda Kerr, and specifically her comments in a recent Marie Claire article that are supposed to be about body positivity.

However, to me, the news.com.au article and especially its headline and Kerr’s statements in her Marie Claire interview do nothing to affirm the confidence of women who are mothers. Absolutely nothing in my opinion!

I am not sure the intent but they both missed the mark.

Let’s go through it, shall we?

At first blush, the headline reads that Kerr is “Ok that motherhood ruined her figure.” Oh really?

First of all, motherhood did not ruin her figure.  That is a very off-the-mark suggestion.

I am pretty sure motherhood enhanced her life and I’m also certain it gave her new curves. In  many cultures and countries around the world, curves are very much appreciated by many women and men worldwide.  Some women I know personally work hard to acquire curves.  Also, look at the Kim Kardashian phenomenon, for example. Note all these Instagram models that are getting butt enhancements, injections and wearing padded pants or photoshopping curves into there photos!

In that sense, then, motherhood made her figure better! It did not “ruin” her body, at all, necessarily!

Second, the headline casts a negative light on pregnancy and relays why a lot of women experience pregorexia and deprive themselves and their babies of much needed nutrients while pregnant over fear of gaining weight. This headline feeds into that very harmful notion of pregnancy being something that will mess up one’s body and figure.

I cannot stand it!

Inside the Marie Claire piece, the former Victoria’s Secret Angel who has a 7-year old son named Flynn with ex Orlando Bloom says “It’s OK, I’ve got a mum-bod and it’s fine!”

There is a very negative connotation behind the term “mum-bod” in that quote. This sentence relays that she is content with having a body associated with mothers. Ugh.

Society continue to tell women who are mothers that there bodies are unacceptable, not attractive and should be something we work hard on changing, altering, or improving.

The News.Au site feeds into this horrible notion when it states of Kerr, “even when she was heavily pregnant, Kerr showed off her curves for photographers.”

Hear me now: Women with or without having a baby bump have curves and take photos and have photos taken of them. Having curves is not a reason to not be worthy of being photographed!

I really hate this article! It’s so mean!

Then Kerr doesn’t add much to the convo by being quoted saying in that Marie Claire article, “I don’t mind. It’s all part of it. I took nine months – well, 10 months – to grow a beautiful child and it might take 10 months to feel good in a swimsuit again.”

You shouldn’t need a size 0 figure or body to feel good in a swim suit. It’s not a body positive article at all.

That’s all I have to say about this topic but there is no wonder women are not supported in so many aspects of their lives, before, during and after they join motherhood.

Media and major influential figure internalize and spout out so much toxic positions.

Ok. Off my high horse for the day! Have a great week all!