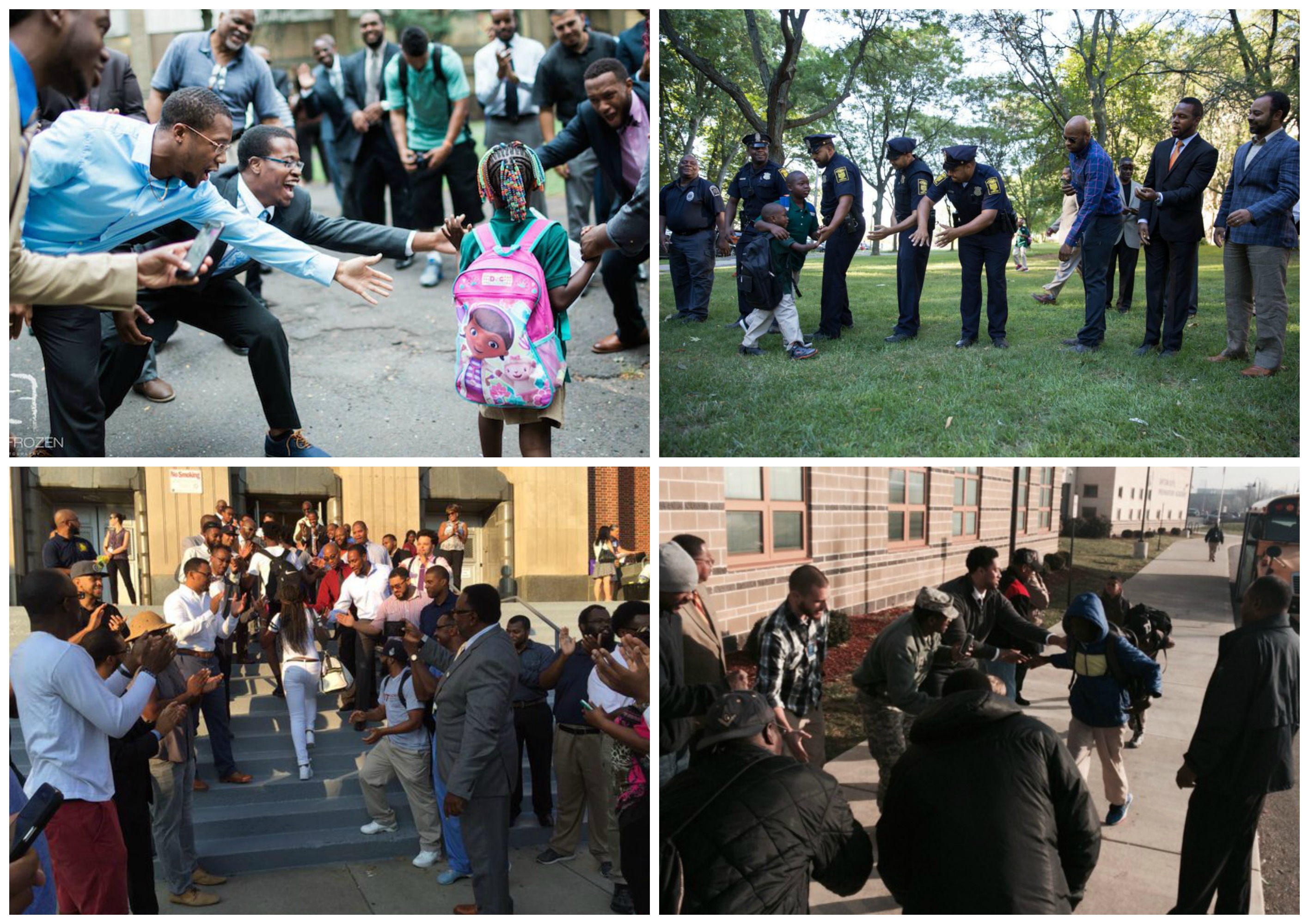 There is a new very positive tradition that is taking over the nation where men, black men in particular, gather at schools to greet, high five and dap students as they enter the school for the first day of school.

It started with a member of the organization 100 Black Men organizing one in his city, which got lots of media attention. The idea caught on and since then, it has spread o other cities. Hartford, Connecticut; Boston, Massachusetts, Seattle, Washington; Texas, Dayton, Ohio, New York, City and other cities have taken on the trend and organized similar First Day of School greetings.

In Texas at Kelly Elementary School, “9 out of 10 students are raised by a female family member and may not have a male role model,” Principal Alaina Criner said of the event where men came to her school this year. 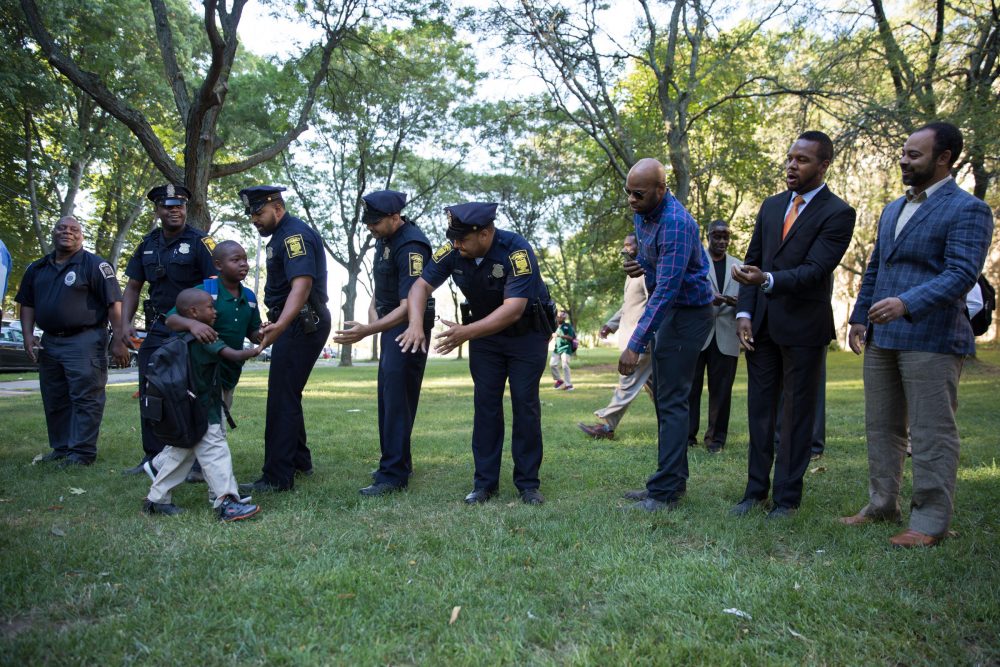 “Just so they have someone to look up to,” Criner told KTNTV about the effects of the men’s presence.  “Someone that maybe looks like them, or someone else in their life as a role model.”

Attorney DeVaughn Ward organized one at Martin Luther King, Jr. Elementary a few years back and had this to say to Yahoo! Parenting:

“In this school they may not typically see career professionals on a regular basis. So we wanted them to see people who look like them out there supporting them. Seeing someone in a suit and tie would hopefully encourage them and give them the idea that ‘maybe someday I can do that too.’” 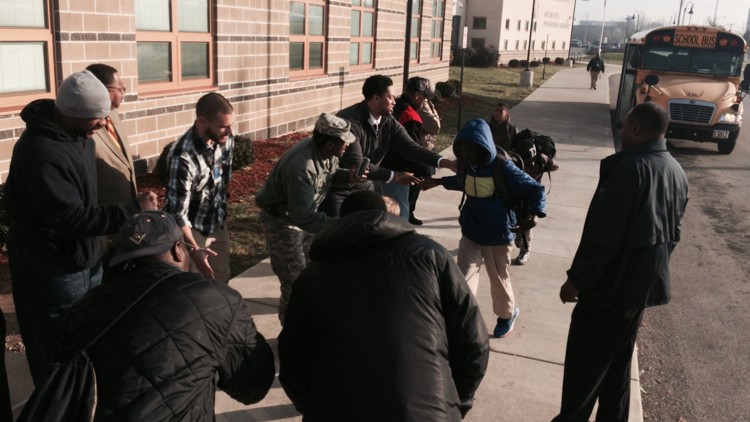 In Seattle, Washington, Seattle University Law Professor Bryan Adamson wore his academic robe and hat and explained the importance of showing up for dispelling myths and stereotypes about black men, and showing this demographic in a positive light. 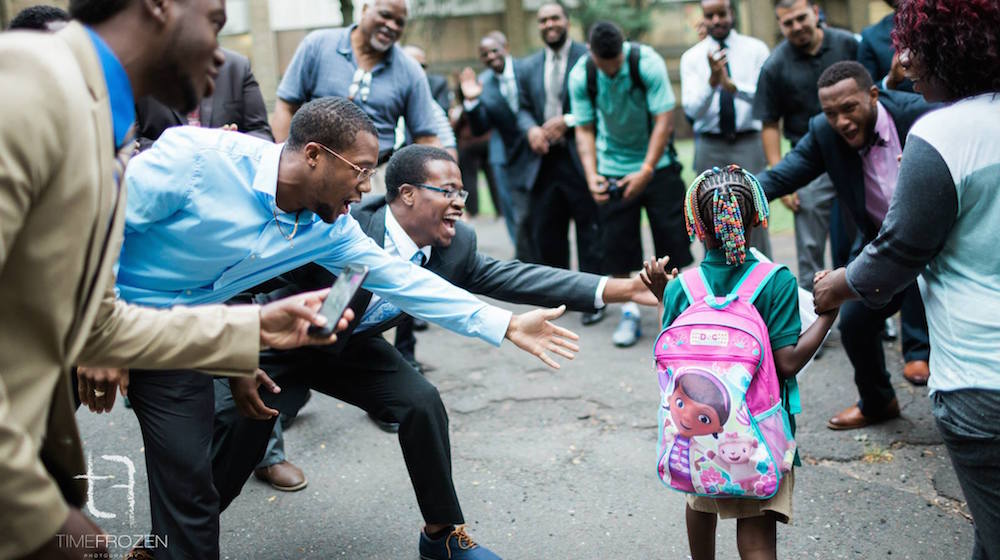 “(Students) remember, and they model,” Adamson said. “They see these images of what they could become, whether they look like us or not, and go into their communities. They are the ones changing the narrative.”

In Maryland, schools are not open until after labor day so Maryland Delegate Angela Angel is using her nonprofit charity, Advocate Angel, to enlist men to help welcome students in Prince George’s County, Maryland. She is calling the county-wide event, “Dap Day,” named for the friendly fist or fist greeting.

There are shifts of 7-8am, 8-9am, and 9-10am, Angel told local radio this morning. They can find out more information and sign up here. 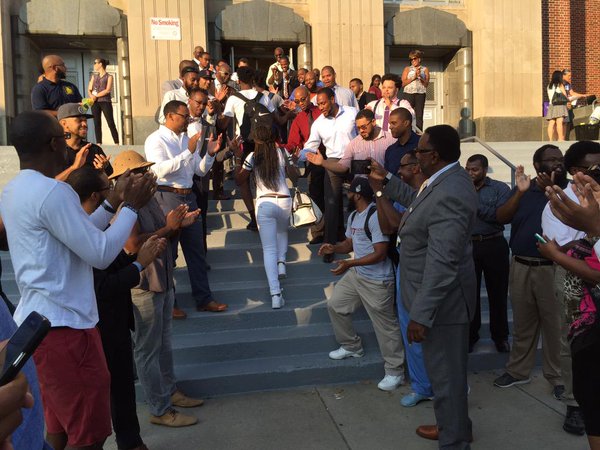 Our culture seems obsessed with pregnancy given all the fascination over celebrity “bump watch”, celebrity post-baby bodies and all the nonstop studies and articles about pregnancy each week. Still, it’s still taboo to be pregnant in the workplace or while launching a company.

Yahoo Parenting posted a piece recently about women who run their own businesses who hid their pregnancies while looking for funding or opportunities.

It featured Talia Goldstein who is the CEO for a matchmaking startup called Three Day Rule that recently entered a lucrative partnership with Match.com. But before realizing tremendous success, Goldstein explained in an essay in Fortune  that while looking for investors, she was “ashamed for getting pregnant” because her industry “looks down on it.”

Goldstein, who had appeared on ABC’s Shark Tank heard comment after comment to give her that impression. One person told her “a pregnant CEO/founder is going to fail her company.” and another remarked “it’s a huge red flag when the founder of a company is pregnant.” Someone else retorted: “Honestly, I’d never invest in a company with a pregnant CEO.”

When Goldstein, who once worked as a producer at E! Entertainment, got pregnant she made a conscious decision to not alienate investors by hiding her pregnancy from friends, colleagues and even her business partner.

“I must have looked ridiculous,” she wrote about going as far as wearing a bulky trench coat in 80 degree weather. “But I knew that I had a better chance of raising money looking ridiculous than I would looking pregnant.”

Now that the mom to son Max is pregnant again, she plans to make it easier for her mainly-female employees so they can feel comfortable to start a family when they’re ready without fear of retribution for doing so.

Yahoo cited a Cornell University study which concluded that mothers are viewed as less competent and committed than fathers, even though the evidence supports that moms outperform their childless counterparts.

Despite the fact that the Equal Opportunity Employment Commission (EOEC) has updated its guidelines in 2014 to state that employers cannot fire, refuse to hire, or demote a woman sole on the fact she is pregnant, many employers don’t follow the suggestions and women too do not know their rights.

“I hid my pregnancy at work until my third trimester — thankfully, my bump wasn’t that big,” one anonymous New York City-based copywriter told Yahoo Parenting. “I was a contractor, and I worried that pregnancy would cloud all my other attributes, despite working at a female-dominated company that made products for women.”adding, “Once, in the bathroom, my co-worker heard me throwing up from morning sickness, and I pretended I’d had a late night. I figured it was better to be hung-over at work than pregnant.”

A Los Angeles-based psychologist  chimed in about why she waited until her third trimester to announce her pregnancy: “I had just been hired into a tenured university position, and I was worried people would question my competency to take on new responsibilities.”

It’s an unfortunate reality for many women and it doesn’t seem like it will get better.

A former Florida Teen Mom has released a brand of two piece swimsuits to cover moms’ stretchmarks and C-section scars.

Altrichia Cook says after having her son ten years ago, she struggled finding swimwear to accommodate her post-baby body, Buzzfeed reports.

“I was just looking for a high-waist suit for a vacation with friends to Puerto Rico,” Cook told Yahoo Parenting. “I couldn’t find one, so I took matters into my own hands and designed one.”

When her friends saw the ones she made for herself and began inquiring on how they could get one just like it, Cook realized that she was not alone in her feelings about swimwear and launched  her line, Allusions by A.Lekay.

Her designs are a welcome addition to the market.

“As I have grown, I get so many thank-you emails of women thanking me,” says Cook, who has since reunited with her son Anthony’s father. “One instance, a customer told me that she hadn’t worn a two-piece swimsuit in over 20 years.”

Her line got a recent boost when rapper Nicki Minaj was photographed in one of her designs from her Rockstar collection on the cover of the July issue of Cosmopolitan magazine.

Recently, there has been a movement for mothers to embrace their post-baby bodies including all the marks that come with it.

While Cook agrees its important to “love the skin you’re in,” but still, says  “realistically, no woman wants to share her stretch marks or C-section scars.”

Kudos to her and that line! We’ll pick up a pair for the Bellyitch moms on staff!