All  actress Alyssa Milano wanted to do with carry the “liquid gold” espressed breastmilk with her on the plane on the way to a romantic getaway with her husband today.
But the Mistresses  alum, who gave birth to her second child, daughter Isabella last September 2014,  was made to dump the milk when she traveled through Heathrow airport in London.
The airport only allows those traveling with  their infant or baby to take more than 100 millileters of breast milk aboard a flight. Because the former child star of  Who’s the Boss did not have her baby in tow, the airport officials threw the precious milk away.
She took to Twitter to complain.

.@HeathrowAirport Why can you test my toiletries to make sure they are safe but you have to throw away my breast milk?
— Alyssa Milano (@Alyssa_Milano) April 9, 2015

We feel your pain! Ugh!

Thank you Alyssa Milano for calling out the double standard in American culture over breasts.
In a recent tweet addressing Kim Kardashian‘s nude cover photos for Paper magazine, Milano tweeted,
“Wait! I don’t get it. No disrespect to Kim but… people are offended by my breastfeeding selfies & are fine with her (amazing) booty cover? “

Wait! I don’t get it. No disrespect to Kim but… people are offended by my breastfeeding selfies & are fine with her (amazing) booty cover?
— Alyssa Milano (@Alyssa_Milano) November 12, 2014

Yes girl. This is A-merica!
In October, many took to social media and the blogs to express their disappointment, disdain or disapproval for the Mistresses alum’s decision to share a selfie of herself while breastfeeding.
It also reminded me of all the shaming a college graduate got for nursing her hungry baby right after getting her diploma, then sharing a pic a friend snapped of her on a breastfeeding support Facebook page.
The image created a lot of controversy by those wishing she would cover up.
Interestingly enough, it is probably fair to assume that those who were decrying breastfeeding moms in public are the same ones who probably wouldn’t think nothing of Rihanna wearing a sheer dress that same month which revealed much of her bare breasts.

Sometimes I feel it’s like the movie Groundhog Day each time a celebrity posts a photo of herself breastfeeding a child on social media. The celebs say they are doing it to share, to lessen the stigma, and to support other women and encourage them to breastfeed their babies.
Nonetheless, a good chunk of society is still not cool with seeing exposed breast in public and definitely not on their social media stream. Plenty believe it should be kept private and then there are those (many among the 3K+ and counting commenters on this Yahoo! story about the photo) that will call the celeb a “fame whore” only sharing the imagery for glory and attention and not true altruistic purposes.
Even when wary graduating college students do it out of convenience to hush a crying baby and share in social media, they’re getting flak.

Alyssa Milano, who just welcomed daughter Elizabella with husband David Bugliari, is the latest. Milano, who also has a 3-year old son, Milo, with Bugliari, shared a photo on her Instagram account this past Monday, October 27  with a quote from Milan Kundera’s “Life of Elsewhere”.

Very cool just don’t read some of the comments in the various articles about the photo.
*sigh*
We know who you are and where your heart is Alyssa. Kudos to you for being an advocate! 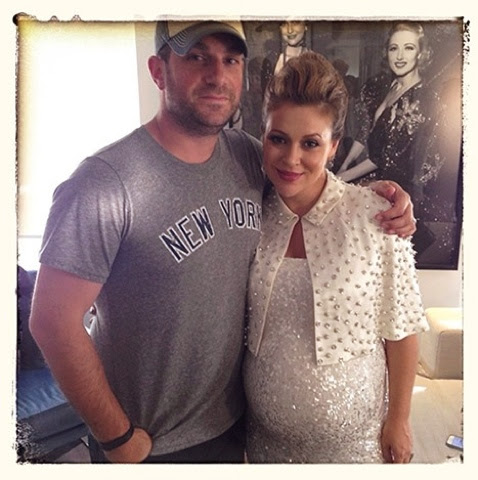 Congratulations to Mistresses actress Alyssa Milano on the birth of her second child, a daughter, with her CAA agent hubby Dave Bulgiari.

The couple named her Elizabeth Dylan, E! News reports.
“Mommy and baby are doing wonderfully,” a rep for the Who’s The Boss alum said.
The couple are also parents to son Milo, who just turned 3 on August 31.
Yay!! Two Virgos! We rock! (Smile)
0 comments

Inside the upcoming issue, the former child star (Who’s the Boss) reveals that she had a bit of morning sickness for the first three months of her pregnancy this round but not with her son, Milo.

That’s how she knew ” it was going to be a girl,” Milano shared.with the mag.

The mom-to-be is pretty busy juggling life with a hit show, while also co-hosting Project Runway All Stars and being a mom to a toddler while being a wife to Hollywood agent David Bugliari.

“I’m mentally preparing to be working pretty much until the end of this pregnancy,” she said, while also revealing that she is also managing a renovation on the family home outside Los Angeles. Wow!

“I  feel good, but I’m tired, and I don’t know if that’s the pregnancy or because I’ve been working so much.”

As to whether she is one of those moms who love pregnancy or hates it, Milano revealed that she loves it.

“I don’t think it’s as romantic as we project it to be through the media, but I think what the body goes through is miraculous,” she added. “It’s such a cool thing to experience. I feel blessed that I’m getting another chance to do it, especially at 41.”

Check out a behind the scenes of the cover shoot

This is a week of the bare bump share as mom-to-be Alyssa Milano also took to her Instagram account this week to post a belly progression pic which also featured her beautiful 2-year old son Milo with his gorgeous baby blues!
“#MomAndBaby are doing fine,” the Mistresses actress captioned the photo. “Families everywhere should be able to say the same.”
Milano is known in social media for being active in politics, social justice and policy and showed it again by including a link the the  U.S. Agency for International Development to direct followers to the organization which  works to end extreme global poverty, maternal and child mortality in developing nations.
Kudos, mama!
The Charmed and Who’s the Boss star and her husband David Bugliari are expecting their second child this summer.

Second time mom-to-be Alyssa Milano joined her cast mates today do promote Monday night’s season premiere of their hit ABC network show Mistresses. Before heading out to start the day on Good Morning America,  the Charmed alum, who is expecting a daughter with husband David Bugliari, Instagram shared who she was wearing. The couple are parents to  son Milo, born August 2011.

Before her appearance on The View, the Who’s the Boss alum paused to promo her second outfit for the day. Hard working mama!

Check out a clip from the segment:

Mistresses star Alyssa Milano headed off the usual suggestions from onlookers that a woman larger than her gestational period may be having twins.
The petite 2nd time mom-to-be shared a bump progression pic on her Instagram account last Friday, April 4.
“The bump,” she captioned the photo. “#shortpeoplecarrybig #noitsnottwins.”
That’s right, mama! Tell em! She looked amazing though. We are fans!!
The Charmed alum and her husband David Bugliari are expecting their second child. The couple are parents to 2-year old son, Milo. They announced the pregnancy last month.
0 comments 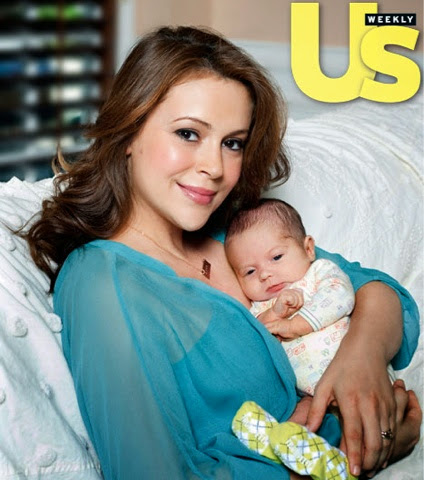 Congratulations to Alyssa Milano and her husband CAA agent David Buglari on the news that they are expecting their second child together, a rep told US Weekly.

The Who’s the Boss and Charmed star and her hubby are parents to 2-year old Milo.
0 comments

In a very “awwww”-worthy gesture, Who’s the Boss? actress Alyssa Milano revealed her baby’s gender exclusively to her fans on her website recently.
Filmed with a smart phone inside her Mistresses dressing room, the social media savvy maven calmly and emotionally shared that she and CAA agent David Bulgliari, her husband since 2009, are having a girl!!!!!
“Hello, lovely people,” the Charmed alum shares. “I’m in my ‘Mistresses’ dressing room and I wanted to share with you guys that I am expecting a little sweet baby girl. And David, Milo and I could not be happier. Truly, we could not be happier. So exciting!”
Awwwww! Watch the Video here: