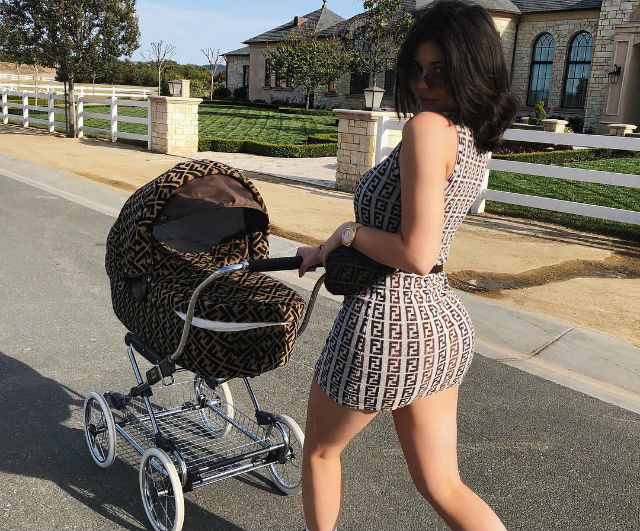 Kylie Jenner is helping designer Karl Lagerfeld bring back the 53-year old French designer Fendi’s monogram logo back in style with her recent Instagram snap of herself outifitted in a skin tight Fendi mini dress pushing her three month old daughter Stormi in a monogram Fendi baby carriage while carrying her essentials in a vintage Fendi  Fanny pack with the logo on it as well.

The stroller retails for $12,500 so the money emoji she punctuated the caption to the photo, “Stormi Strolls” with is quite appropriate!

The logo became part of popular culture through TV shows like Sex & The City and its prominence within the old school hip ho music scene. As upscale retail site Heroine pens in its blog post:

The world of Hip-hop has always had a thing for the Fendi logo: Dapper Dan of Harlem used fake Fendi fabrics featuring the Double F to dress artists on stage and off-duty and Kanye West became a living advert when he shaved the Fendi logo onto the side of his head in 2006 while attending a party the brand was hosting in Tokyo, Japan. Fendi became a prime choice for male and female rappers, and many rappers and urban artists have used Fendi in their lyrics. The brand is referenced in many songs including Black Eyed Peas’ 2005 hit My Humps, Yo Gotti’s 5 Star Chick remix from 2009 and in Kanye West‘s Don’t Stop a year later, and Chamillionaire’s Gucci & Fendi in 2012. But, the name-drop isn’t the prerogative of hip-hop: Lady Gaga also cites Fendi in her 2013 song Fashion.

Add a logo diaper bag, which retails for about $1430, to the ensemble and you got a very expensive stroll! 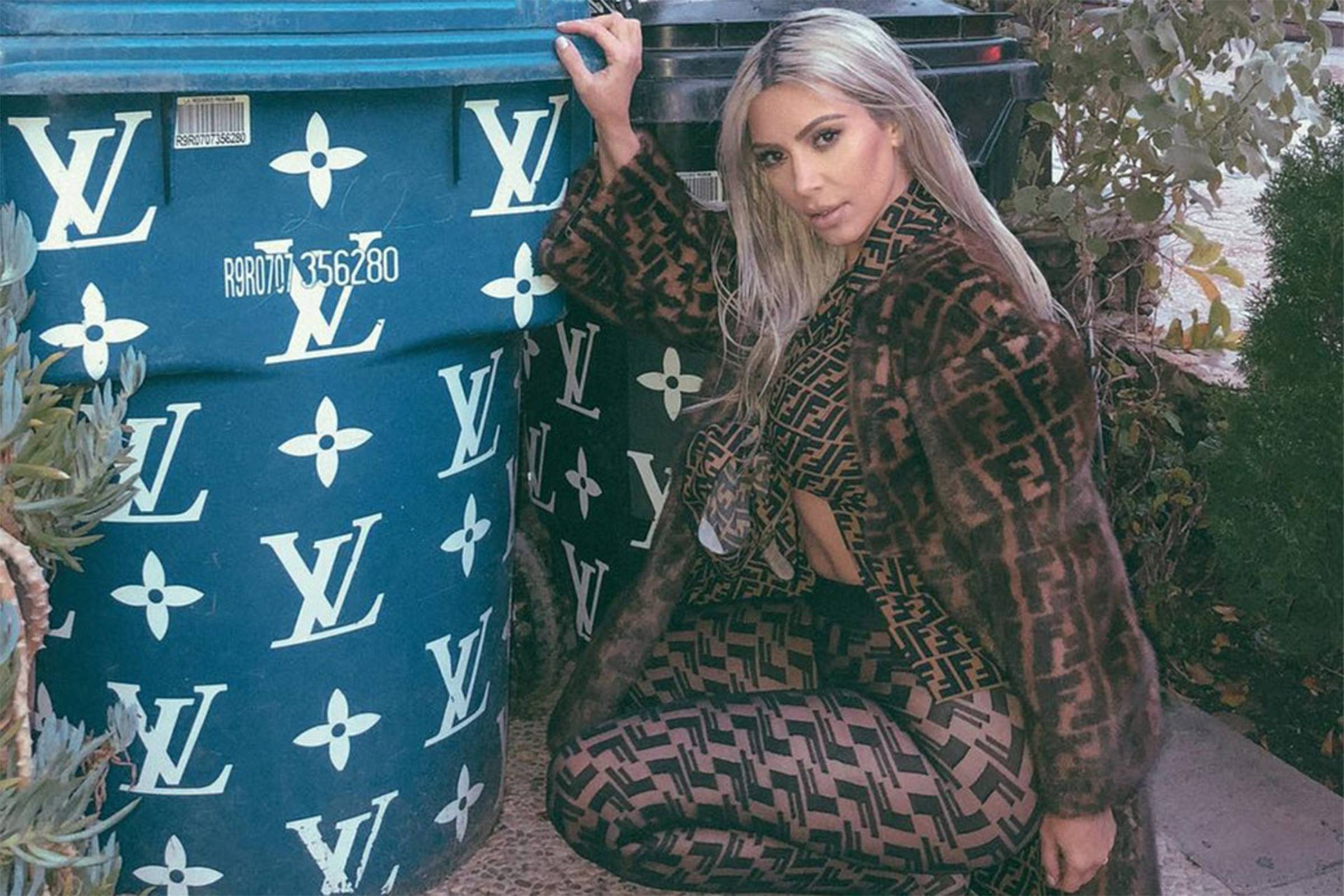 Jenner’s half sister Kim Kardashian -West promoted the logo brand in a recent post as well. I can dig it. The trend-setting Kardashian/Jenners are at it again:

Style and fashion blog Heorine added to its treatment of the resurgence of the brand which Kylie’s sister Kendall promoted when she walked for the line recently:

Fendi’s Spring/Summer 2018 collection, Karl Lagerfeld brought back the 53 years old emblem to the catwalk. Modeled by Kendall Jenner, a cropped fur blouson and matching tote bag were printed in the brand’s iconic Zucca print, while Lexi Boling was dressed in a knee-length fur coat trimmed with the brand’s monogram. For the Autumn/Winter 2019 collection, the inverted Zucca again played an essential role. Karl Lagerfeld understands the power of branding, and Fendi’s logo is a key element of the brand’s overarching strategy. Celebrities, too, know how to play with such iconography. In February 2018, Kim Kardashian posted a selfie on her Instagram account, on all fours, dressed in vintage Fendi logo stockings with a matching tied-up top, the caption reading: “Fendi Fan.”Logomania is in, and the Italian brand is at the forefront of the trend.

Fendi’s inverted Zucca has become, like most fashion logos, a sign of style appurtenance. It makes one feel part of a certain elite synonymous with Italian high fashion, high drama, and high craftsmanship. It is the coat of arms of an empire that helps keep the Fendi spirit alive and desirable thus its Helvetica typeface being easily and widely counterfeited around the world. Lagerfeld’s perspicacious creativity has led him to design one of our favourite luxury hallmarks in just “three seconds.”

The celebrity mom took to Twitter to answer questions about her life as a parent a few weeks ago. “There really was no worst part,” Kylie said of her experience with pregnancy. “Probably not being able to eat sushi,” Kylie mused. “I had such a perfect experience. she moved a lot,” the celebrity mom said.

i have tons! Maybe I’ll share one day ☺ https://t.co/vUSje0SJdN