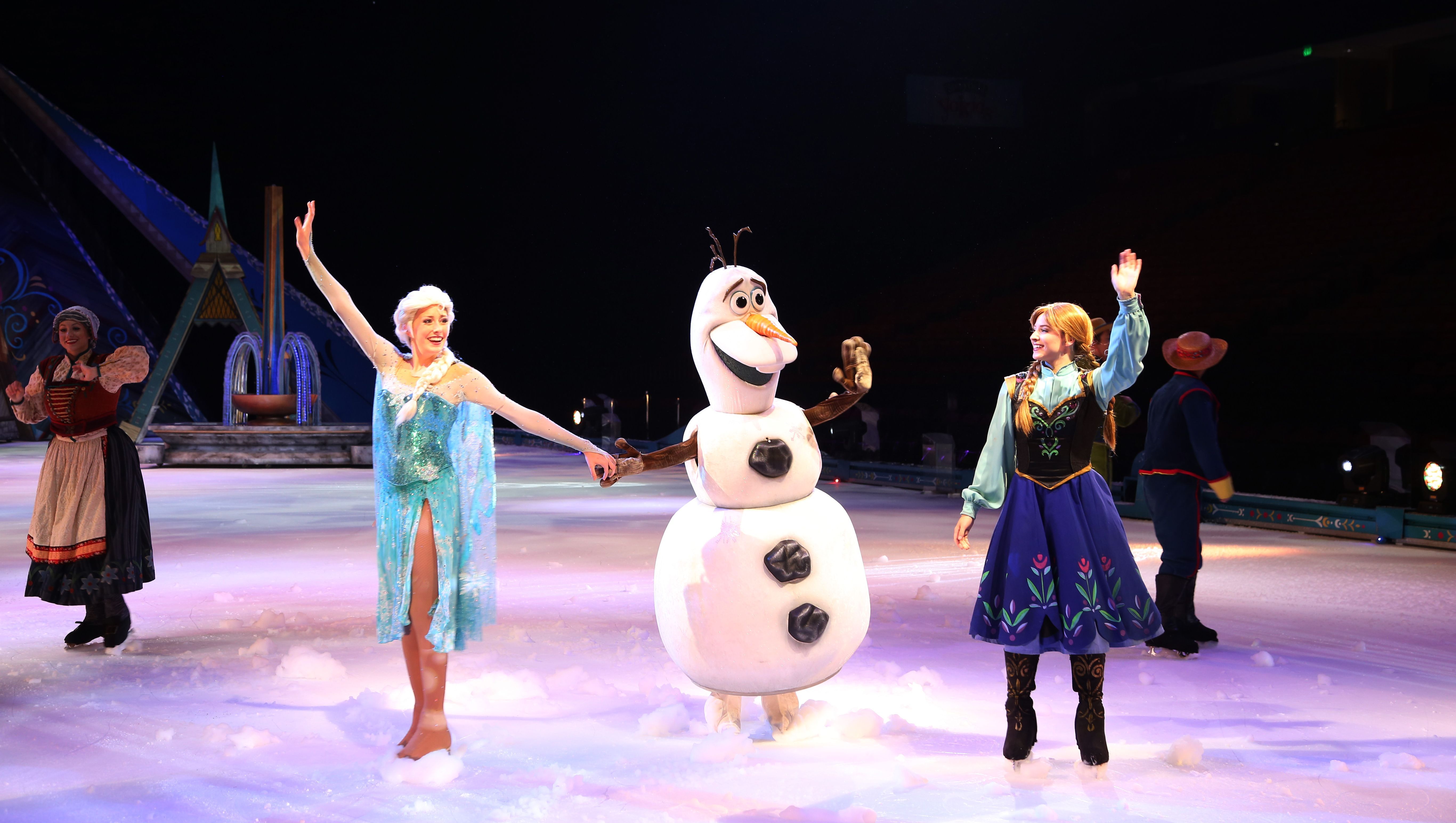 One more week, DC and Maryland, until Disney On Ice presents Frozen! launches at our door steps!

As a Feld Family Ambassador, I cannot wait to take my daughter to discover the full story like never before via a dazzling ice skating showcase with  amazing special effects and memorable. We’re so excited to be transported magically to wintry Arenllew on Valentine’s Day, the day the show opens in DC.

You too can be a part of Anna’s fearless adventure to find her sister, Queen Elsa, whose icy powers have trapped the kingdom in an eternal winter if you purchase tickets to the show which will be featured from February 14 to 19 at the Capitol One Arena in Chinatown, DC and February 8-11 at the Wicomico Youth and Civic Center in Salisbury, Maryland.  For those of you who do not live in DC or Maryland, you can see here  to find out when it will be near you! 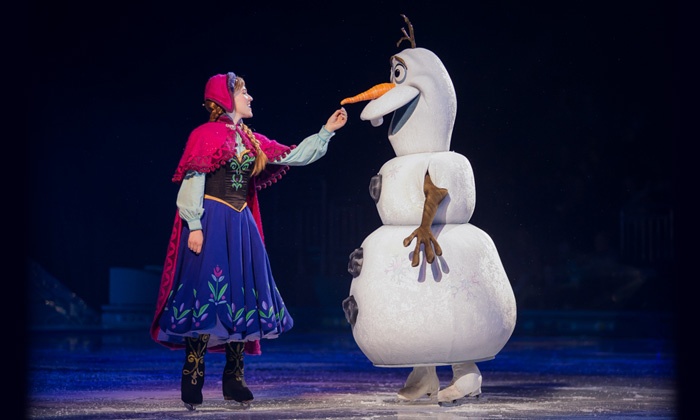 Join the hilarious snowman Olaf, rugged mountain man Kristoff and his loyal reindeer sidekick Sven as they help Anna in a race to bring back summer. Encounter Everest-like conditions and mystical trolls as you sing along to Academy Award®-winning songs like Let It Go and ultimately discover true love is the most powerful magic of all.

Hosted by Mickey Mouse and Minnie Mouse, your whole family will delight in special appearances by stars from Toy Story, Finding Dory, The Lion King and the inspiring Disney Princesses.

Experience magic at every turn and create memories to last a lifetime at Disney On Ice presents Frozen – the show worth melting for! Watch the preview!

Before actor Mahershala Ali won his first Oscar for Best Actor in Moonlight, he won big with the birth of his first daughter,  Bari Najma Ali.

Ali announced the birth during his Academy Award acceptance speech, “I just wanna thank my wife, who was in her third trimester doing awards season. We just had a daughter four days ago [huge applause from the audience].”

He added, “I just wanna thank her for being such a soldier through this process… and really carrying me through it all. Thank you, I really appreciate it. Peace and blessings.”

Before then, he shared a photo of his wife Amatus Sami-Karim cradling their baby on his Instagram page, captioned with her name, how it is pronounced and a hashtag about the baby’s astrological sign.

Baby girl escaped being called Oscaria. During a pre-Oscar interview, the actor who also stars in a heavily nominated film, Hidden Figures,  joked that if the baby arrived after he won the Oscar he would name her Oscaria if a girl.

Ali made Oscar history as well. He instantly made history as the first Muslim to win the Best Actor award ever. Ali’s film Moonlight took home the Best Film award, albeit after a much talked about controversial and history-making moment. Presenter Warren Beatty was given the duplicate envelope for Best Actress. He opened the envelope and noticed the error and peered inside the envelope looking for another card. Beatty hesitated and did not announce the winner and instead showed the envelope to his co-presenter Faye Dunaway who immediately announced La La Land, which was the movie listed under Emma Stone’s name.

Last night also was historic because the most Black winners won in major categories ever. 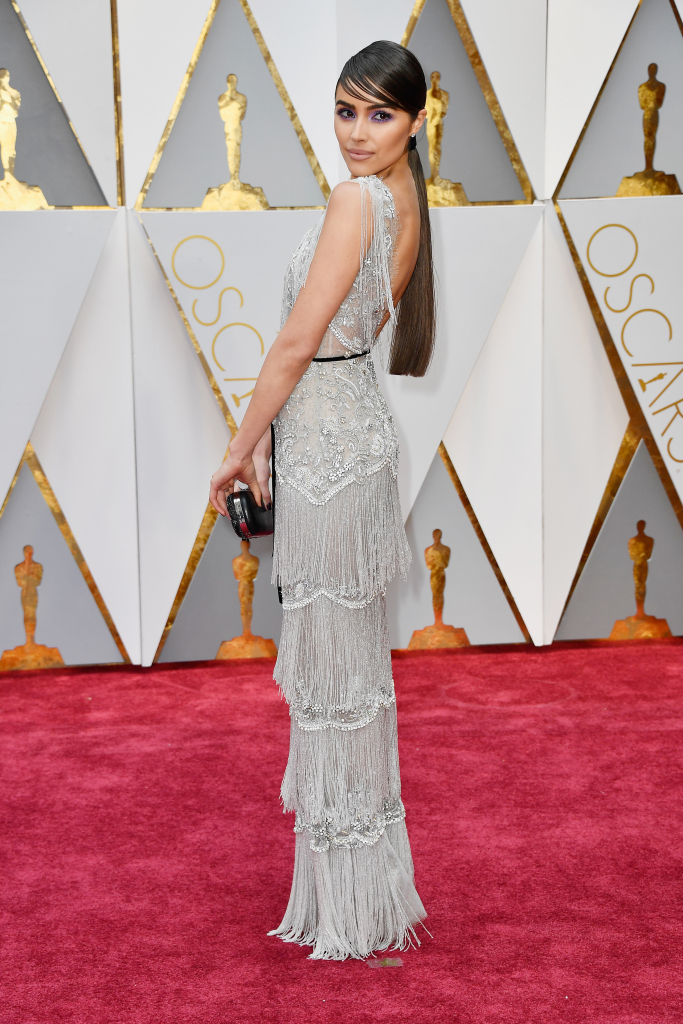 The former Miss USA and Miss Universe 2012 teamed up with our Bellyitch Bumpwatch alum Georgina Chapman to design the dress made up of a chalice.

“It’s in partnership with Stella Artois and Water.org,” the star of The Other Woman  told Ryan Secrest on the red carpet. “Stella Artois created chalices and for one chalice sold, five years of clean drinking water is provided for someone in the developing world. So this dress is actually made out of the chalice pieces, and it’s encouraging people to get involved in the water crisis and buy the chalice.”

And it is a stunning masterpiece. It even flows like water.

“We wanted the dress to represent water itself, so it’s sort of cascading,” she explained. “The crystal represents the water as well. We knew we wanted tears.”

She continued, “They did an amazing job…and it’s fun when you can incorporate good things and charity into fashion!”

Best Supporting Actor Academy Award contender Mahershala Ali has been racking up awards for his break out roles in Moonlight, Luke Cage, House of Cards and Hidden Figures and now he is considering naming his soon-to-be born first child Oscar if he wins.

Well, kinda. When interviewed by E! News Marc Malkin  on the red carpet of the annual Oscar nominees luncheon this week,  the current ‘It” guy of Hollywood, was asked if he would consider naming his and wife Amatus Sami-Karim’s baby, after the nickname of the famous Academy Award trophy.

“Maybe as a middle name,” the recent SAG Award Best Supporting Actor winner answers coyly in a video replay of the interview. “If it’s a girl , Oscaria.”

The hardest working man in tinsel town also said the award season is readying him for endless nights given that everything is coming to head simultaneously.

Everything is happening, “literally at the same time,” he told Malkin. “She’s in her third trimester and we are in the middle of the Oscar’s unfolding and all these other award shows. It’s finishing as the whole [award show] season finishes.”

What an exhausting schedule for  Ali, who also took home the the Critics Choice  Supporting Actor Award for his role as Juan in Moonlight.

“I’m just happy if I’ll still be on my feet come February 27.” he added, referencing the end of award season. But that is when the endless nights really begin, as Malkin reminded him.

Ali, who appeared in the Hunger Games franchise films, agreed.

Ali and Sami-Karim met as New York University students and tied the knot in 2013. They announced news of the pregnancy in December 2016.

He recently beamed about his wife in an interview with Elle magazine.

“She and  I have known each other for a really long time, (about) 17 years,” he confided. “So, at this point, she’s seen a big shift in things, but at the same time, she’ll ground me real quick if I start feeling myself a little too much. She’s very real, like, seriously.”

In case you missed it, our Bellyitch Bumpwatch alum Jennifer Hudson brought the house down (and some say saved) the NBC’s live musical Hairspray Live that aired this week, on Wednesday, December 7.

The actress played Motormouth Maybelle and did justice to one of the most powerful numbers, I Know Where I’ve Been which required pipes! Of course the Academy Award-winning actress could pull it off. After all, she won her Oscar in a role in a Dreamgirls remake that featured the mom to one taking audiences to church.

The musical takes place in 1960s Baltimore and focuses on the Civil Rights Movement, and in context, the song  Hudson belted out gave some extra significance to the lyrics.

Israeli born Portman went with a striped gown by The Row at the Israel Film Festival Gala in Beverly Hills on Wednesday, November 9 with her hair in a half-up, half-down style with nude makeup . The Academy Award winner polished doff her look with simple hoops by Eddie Borgo and a Vic Minaudière clutch.

Meanwhile, French actress Cotillard stars in a new  WWII drama Allied alongside costar Brad Pitt and looked fabulous in a navy Christian Dior maxi dress accented with an embroidered white hand-strap clutch by Dior, and side swept coifed hair at a fan event for the film at the Regency Village Theatre on November 9, 2016 in Westwood, California.

Both women have 5-year old boys at home.

Cotillard, who starred in Inception. and her longtime partner of 9-years Guillaume Canet are expecting their second child together. The couple are parents to 5-year old son Marcel.

Ok I find it hilarious that some are saying the Twitter uproar over The American Sniper ‘s use of a fake baby in an intense scene in the movie will make it lose the biggest award at the Academy Awards tomorrow night. I just spotted entertainment reporter Lisa Respers France‘s article in CNN on that theory.
In the film which portrays the life of the most deadly sniper in American history, Chris Kyle (Bradley Cooper) and his wife (Bellyitch Bumpwatch alum Sienna Miller) are having a convo in the baby nursery after Kyle returns home from the war. Kyle picks up and rocks back to sleep a very obviously plastic baby doll dressed in pink.
Twitter had a field day when the movie first opened and now there are several reports of conspiracy theorists hypothesis that this solitary reason will be why the film maybe won’t win in the Best Picture category tomorrow. The baby has its own Twitter account and there have been several spoofs since then.
“That’s why, a lot of times, producers hire multiple babies —  you can’t always guarantee a happy baby ready for filming,” Toni Casala, founder of LosAngeles-based Children in Film told the  Washington Post. “And if one doesn’t show up, you’re definitely in trouble.”
American Sniper screenwriter Jason Hall explained just that on Twitter: “Real baby #1 showed up with a fever. Real baby #2 was a no-show.”
Check out the clip of the embarrassing use of a plastic baby in a $60M big budget movie:
0 comments

Bravo to our Bellyitch Bumpwatch alum Idina Menzel on her beautiful rendition of the Star Spangled Banner last night before the Super Bowl.
Menzel stunned Oscar audiences last year during her performance of the Academy Award winning Best Original Song “Let It Go” from the wildly popular Disney animated movie Frozen.  She really did sang her heart out! Yes, I said SANG.
Menzel, who has a 5-year old son, Walker Diggs, with actor Taye Diggs, will launch a world tour next summer and will soon star in a new sitcom pilot called Happy Time executive produced by Ellen DeGeneres.

We also were wondering, who made that stunning and bold two finger statement ring she wore with her very smart and well fitted Angel Sanchez jumpsuit with black peep toe Jimmy Choo platforms.

Check out the marvelous performance below: