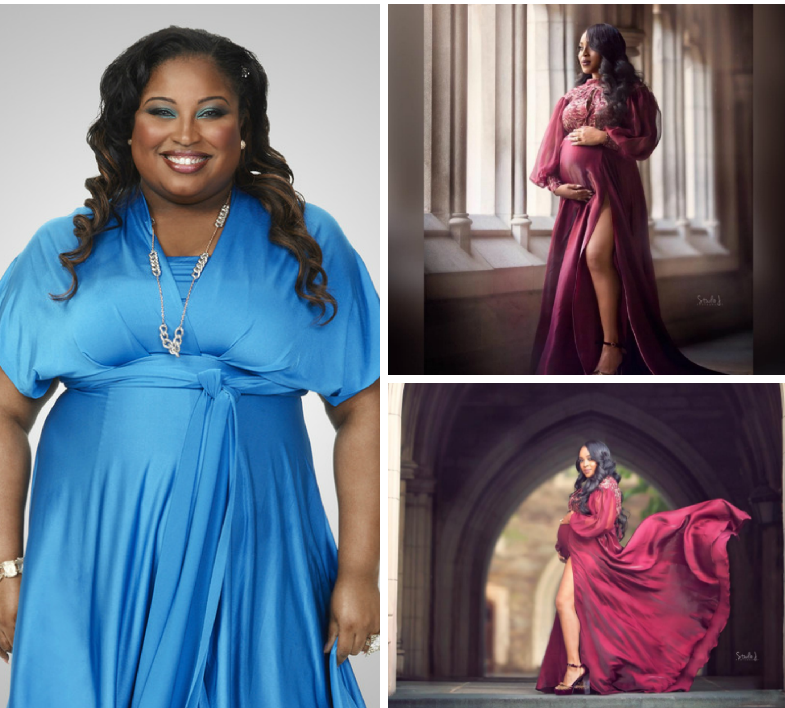 Congratulations are in order to former “Bad Girl”, Tanisha Thomas of Oxygen channel’s The Bad Girls Club, who is expecting her first child with her partner.

In the caption to the Instagram post where she shared a gorgeous maternity shot, she mentions that the pregnancy didn’t occur without a lot of “patience and faith”, indicating perhaps that there were challenges on the road to baby.

She is the second reformed Bad Girl who has totally changed her life around, settled and calmed down and is more grounded. Bad Girl Natalie Nunn  and her husband welcomed their first child earlier this year.

I had not been keeping up with the show and last saw Thomas, who starred in Season two, while hosting a reunion special for the show’s 10 season or something like that and I did not realize that she had dropped a tremendous about of pounds.

When I saw a post in Hello Beautiful sharing the news of her impending arrival, I had to do a double take.  Thomas has since divorced her husband Clive Muir who starred in seven one-hour episodes with her in her high rated series Tanisha Gets Married and WE TV‘s Marriage Bootcamp in 2014.

The TV host’s new boo was featured in an Instgram share of her couple’s maternity session.

I couldn’t ask for a better partner, soul mate and Father to be. From the moment you entered my life you’ve brought me so much joy, laughter and peace ? And despite my occasional antics you ♥️ me unconditionally and effortlessly. I wouldn’t trade you for the world and even though I’ve developed slight anxiety recently, with you by my side I know there’s nothing I can’t conquer. It’s more than love it’s something I can’t explain… I’m just forever grateful and blessed that it’s all with YOU! Forever Grateful that God saved the BEST for last ??? Thank You for capturing this beautiful moment @studiojdphotography My awesome Glam Squad @hairbymizstush ?♥️ (Couldn’t do that day without you!) @kikiknowles___ Hair @belladreamhair Custom Gown @travianvann Barber @dacreatorworkss #MyKing #TheNextChapter #Baesosharptho

Nunn announced the arrival of her and husband Jacob Payne‘s little one on  Twitter.

“Baby Payne is here,” Natalie captioned a photo. “I never thought I could love anyone so much,” the new mom added. “Blessed.”

Before the birth, the Hair Battle Spectacular star kept her followers and fans up to date by sharing photos from the Labor and delivery room.

Thank you for this contraction, Lord!!! I welcome it and know that I am one step closer to meeting my baby! I give this contraction permission to accomplish its task and I trust in my God-given instinct to birth normally and naturally, and I thank you for guiding and directing me during this process. My husband and I can't wait to meet her! Dialated to 8 centimeters ???? #pregnancy #natalienunn #happyeaster #easterbaby #blessed #paynefamily

“Thank you for this contraction, Lord,” Nunn captioned a black and white photo of herself going through labor. “I welcome it and know that I am one step closer to meeting my baby! I give this contraction permission to accomplish its task and I trust in my God-given instinct to birth normally and naturally, and I thank you for guiding and directing me during this process. My husband and I can’t wait to meet her! Dialated to 8 centimeters.”