Rapper Yung Miami, one half of the southern rap duo City Girls, gave an energetic performance this weekend whilst in her second trimester of pregnancy at the BET Awards on June 23rd at Microsoft Theater in Los Angeles, Ca.

The 25-year old, real name Caresha Brownlee, announced this month inside a documentary about her group’s recent and meteoric rise to fame that she is expecting her second child with her partner, producer Southside, but that did not stop her from taking the stage with back up dancers to perform her chart topping song “Act Up” on stage.

The song is off the group’s second album “Girl Code” featuring label mate Cardi B on the hit song “Twerk”.

Their other label mates include Migos, Stefflon Don and Lil Yachty.

Though the group is a duo, Yung Miami has had to hold it down her partner JT, (Jatavia Johnson) who is currently serving a sentence for credit card fraud in Florida.

According to the group’s management, and their label Quality Control CEO, Pierre “Pee” Thomas, JT is set to be released from prison by the end of the summer.

Her initial release date was slated for March 21, 2020. In a recent interview with HipHop-N-More, the QC co-founder revealed that JT is due to be released soon, saying, “will be home within the next 90 days.”

Yung Miami’s mom Keenya Young is also serving a sentence for vehicle manslaughter following a high speed chase after she and another man were caught stealing designer bags at Macy’s.

Both girls’ stories are a testament to using talent to escape a rough path and life.

The actreass wore a signature Michael Costello draped floor length blush colored gown with a deep leg slit with a mesh cut-out top, that showed some of her growing bump.

Sterling looked dapper in a gray suit and a white button down shirt.

“Thank you @michaelcostello for the care free gown and @bcbgmaxazria and @betseyjohnson for the top off,” she captioned an Instagram post.

Our other Bumpwatch alums:

Also, Cardi B went into the show with the most nominations and walked away with the Best Female Hip Hop artist award besting her rival Cardi B, and newcomers Lizzo (who brought the house down with her performance) and uber talented Megan Thee Stallion.

Earlier in the night, she performed a cameo with her on/off again husband Offset’s song and her newest hit “Press.” 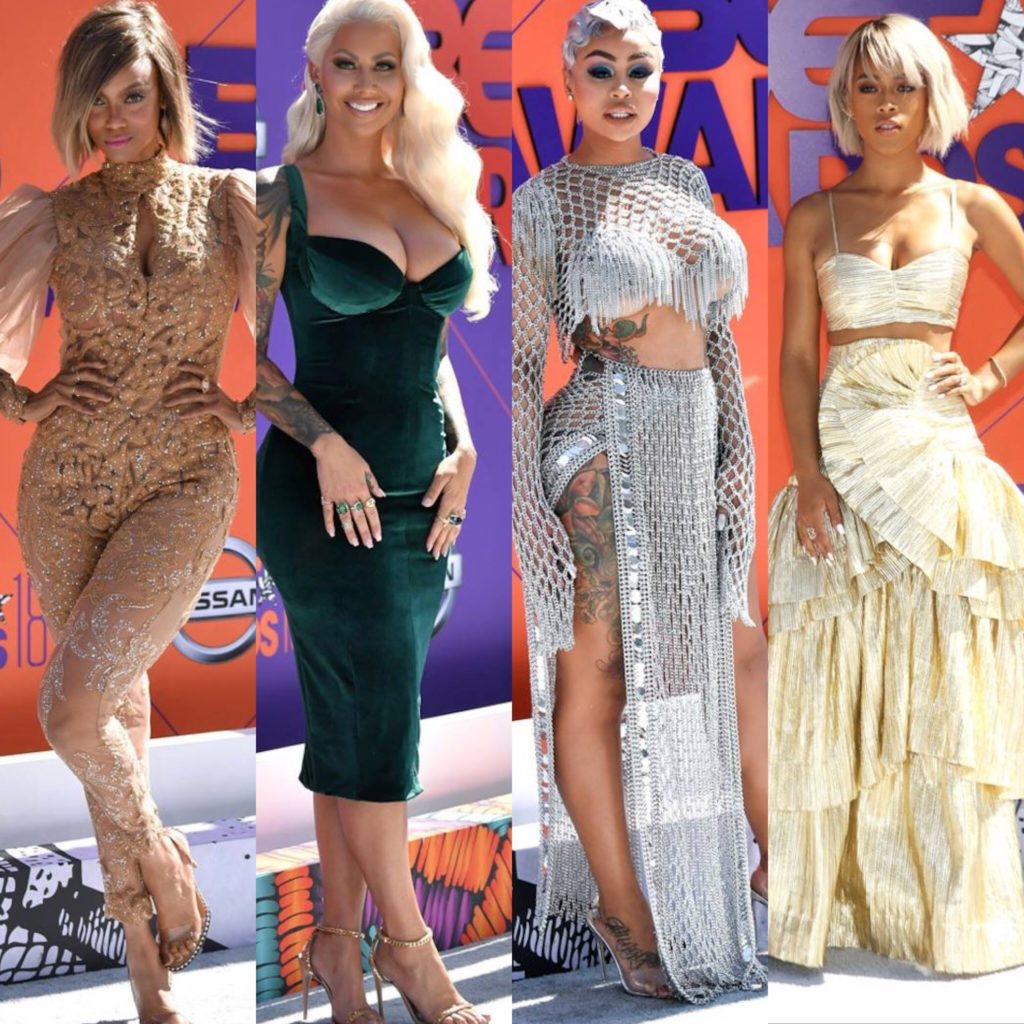 It was blonde ambition at the 2018 BET Awards at Microsoft Theater in Los Angeles, California as we spied many of our Bellyitch “Bumpwatch”  alums and past featured moms rocked platinum to strawberry blonde hair on the red carpet.

Amber Rose ditched her signature buzz cut for a wavy extensions. Her BFF Blac Chyna showed up and out in blonde finger waves.

And recent mom to a baby she adopted Tyra Banks wore a blonde blunt cut bob.

(To round up the collage, added Empire starnams singer Serayah McNeill)

Cardi B would have joined in the red carpet  trend we’re sure if she wasn’t taking it easy while waiting to give birth to her first child with beau Offset of the rap group Migos.

Serena Williams was awarded the Sportswoman of the year.

congrats to all the winners, the nominated and performers!

Peep a few at BET here.

Instead of a red carpet, stars like our Bellyitch Bumpwatch alums Fantasia, Tia Mowry, Alicia Keys and Eva Marcille walked the white carpet in some very fashion forward designs.

A blog fave Beyonce hit the stage to perform her song “Freedom” off of her last project Lemonade. She was joined by rapper Kenderick Lamar. The two opened the show and shut it down at the same time! It was the best performance of the night in my opinion.

Finally, we peeped Mrs. Knowles tour mate DJ Khaled with his longtime girlfriend and now fiance Nicole Tuck who is in her second trimester pregnant with the couple’s first child. Tuck, a wardrobe stylist, and the famous recording artist reside in Miami.

The BET Awards went down tonight at the Microsoft Theater on June 26, 2016  and it opened with Queen Bey performing her hit song with rapper Kendrick Lamar “Freedom”  off of her latest album “Lemonade”.  The receipts are in and the verdict is….Beyonce slayed up and down the wet and drenched stage.

Watch in case you missed it, watch it HERE! Later, among several tributes that night, another one of our Bellyitch Bumpwatch alums, Jennifer Hudson took the stage outfitted in a white hooded mini-dress tribute to Prince‘s 2005 American Music Awards look. She followed up Tori Kelly and Stevie Wonder’s wonderful tribute  of “Take me With You” with her own amazing rendition of his soulful “Purple Rain.”

Later, mama Knowles appeared to accept her daughter’s Video of the Year Award.

So A-List celebrities and the moms of tinsel town have the same inconvenience as other breastfeeding mom who leave their babies home during a night on the town. That dreaded pump and dump in the restroom!

During an interview with Best Supporting Actor nominee Tom Hardy, he told the interviewer that he was waiting for his wife Charlotte Riley to finishing breast pumping in the bathroom.

“She has to do it every hour,” he shared. Riley welcomed the couple’s first child last October 2015.

Phew! Don’t we know it…the pain of having to relieve achy boobs full of breast milk.

I had the fortune of attending the BET Awards in California the summer after having my last child and I too spent an unfortunate amount of time in the bathroom at Shrine Auditorium back in 2008.It was really disgusting and demoralizing experience. One, for having to waste all that liquid gold but second, because you’re pumping in a germ-filled bathroom! ick!

Phew! Glad to be able to confess that and realize I, and Tom Hardy’s wife, aren’t the only ones.

In a 2015 interview with the The Guardian newspaper, musical phenom Adele said during her whirlwind Award show year after she welcomed her first child, she was in line with a bunch of other Hollywood stars waiting to pump in the bathroom.

““Running to the toilet, between awards, to pump-and-dump,” the multi-platinum selling artist said. “Which loads of people were doing, by the way. All these Hollywood superstars, lined up and breastfeeding in the ladies. No, I can’t say who. Because I saw their tits.”

h/t I am Not the Babysitter