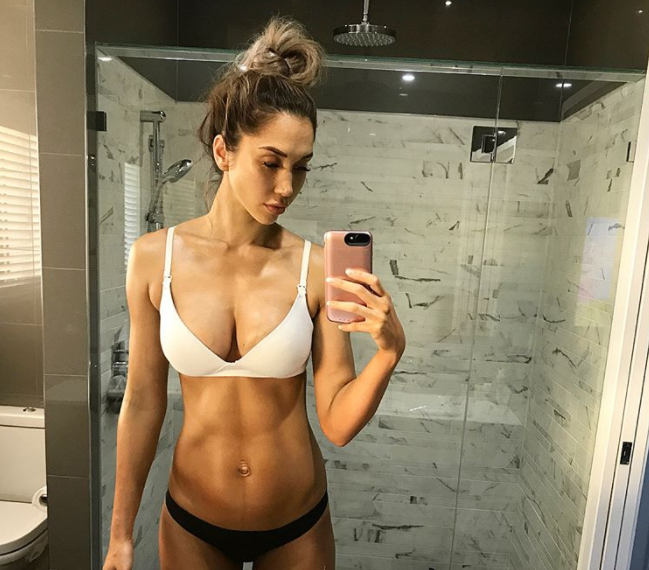 Australian fitness instructor and Instagram influencer Chontel Duncan showed off a photo of her six pack taken only 9 days after giving birth to her second child, son Swayde, this past September 20.

In the caption to the September 29 Instagram post, the former Miss Universe finalist anticipates that she would get mad backlash and hate for posting such an image which is unrealistic for we would guess 90% of the women who give birth.

“Now before anyone jumps down my throat saying anything negative, think before you type,” the Australian starts in a photo of herself in a bra and panty with a super trim tummy exposed. “Everyone is unique and different in their own special way. There is no ‘one journey’ or one way, this is my ‘normal.’”

The statuesque new mom-to-two catapulted to viral stardom back in November 2015 when she posted a bump-to-bump photo of herself and a training partner who was as far along in her pregnancy as Duncan at the time. She was pregnant with her now 18-month old son Jeremiah at the time.

“Each woman carries differently and this most certainly doesn’t mean one is doing something wrong or not healthy,” she wrote in her November 2015 post. “We both have healthy growing babies & we both have had incredible pregnancies so far, feeling amazing & full of energy.”

Swayde came into the world via C-section and the 28-year-old added to her caption that she was “blessed” with an easy pregnancy free of morning sickness.

Australian fitness trainer Chontel Duncan gamed fame earlier this year for her rock hard abs that she used to show off in progression photos on her Instagram account and revealed this week that those abs actually caused complications during delivery of her son, Jeremy. ‘

Duncan returned to Instagram to confess that her delivery doctors ” struggled to rip Jeremiah from my tummy as my abs locked him in super tight as I began vomiting during the operation.”

She revealed that she is left with an unusually long c-section scar because of her abs.

“This is why my scar was cut up on my right side because the surgeon had to cut me further an use forceps to successfully get Jeremiah out,” she wrote in a caption to a photo of her bikini-line scar.

[Part 2] I CRIED I felt like I failed… but then @sam_hiitaustralia reminded me of my mantra which was “to go through all means necessary so baby feels nothing” & I smiled. With confidence I signed the forms & within 20mins had my baby in my arms. They struggled to rip Jeremiah from my tummy as my abs locked him in super tight as I began vomiting during the operation. This is why my scar was cut up on my right side because the surgeon had to cut me further an use forceps to successfully get Jeremiah out. Perhaps a down side to a strong core ? I healed according to my doctor normally, my scar isn’t small, it’s quiet large & I can feel in the centre scar tissue, I tried Bepanthen Scar Treatment & Skincerity breathable masque an this is what I have been left with. I would love 3 more children & I will always try for a vaginal birth with each one. So to all the women out there wearing a cesarean scar, I am VERY proud of what mine means & for the beautiful gift I received through mine. They are memories of the day we all became mummies ???❤️?

Despite the trauma, Duncan said she is happy for the experience and posted her scar out of solidarity with other women who wear pregnancy-related scars.

“So to all the women out there wearing a cesarean scar, I am VERY proud of what mine means & for the beautiful gift I received through mine,” she wrote.
“They are memories of the day we all became mummies.”

And here she is with perfect abs again after birth. Whoa!

Bootcamp day is finally here, dressed by my favourite @lornajaneactive Come say hi to me & the @hiit_australia crew & join us for a 45min HIIT sweat sesh that’ll leave your glutes in pain ??? BRISBANE fitness Expo

A photo of Australian fitness model Chontel Duncan and her friend, Natalie Smith,  who are just 5 weeks apart in their pregnancy has gone viral. Duncan shared the photo so her fans could see that every woman’s pregnancy is different and each carry in their own unique way.

“An[d] this is where it all began… Two ladies 4-5weeks apart in their pregnancies, both super happy & healthy, loving their journeys, embracing the changes & proud to share their growing bumps! #pregnant #expectingmums #happiness #babybumps #growing @hiit_australia @bph_14” Duncan captioned the Instagram photo.

I was surprised with a cute visit today from a friend Nat who is also expecting ? Just being able to see someone in the flesh, rub her tummy, hear how incredible her journey has been so far, how healthy baby is & all the fun talk about kicks, food, names etc was beautiful. This is Nat’s 3rd pregnancy so she had a lot of great advice to share ☺️ It’s very clear in this photo just how tall I am, I mean my chin sits above Nat’s head lol We worked out that we are 4 weeks apart, so our little ones will be the same age, same grade at school and potential best buds hehehehe….. Nat’s due start of March & I’m due end of March. Each women carries different and this most certainly doesn’t mean one is doing something wrong or not healthy etc. We both have healthy growing babies & we both have had incredible pregnancies so far, feeling amazing & full of energy. #21.5weeks #expecting #march2016 #pregnant #love #happiness #Babyduncan

The photo went viral last week with commenters and readers using it to rail against bump bullying.  Yes “baby bump bullying” is a thing. It is where people online (or in person) chide women for the size of their bumps. Usually, a person insinuates the belly is so big that she may be carrying twins or ask if a woman is further along in her pregnancy than she is based on what they perceive is a huge belly.  A lot of it is well-meaning, but still, it can be insulting and hurtful.

With the new attention to her page because of the viral photo, Duncan has since had to deal with criticism about photos of her rigorous workouts during her s second trimester.

The Queensland fitness fanatic said she has decided to use the extra attention to show others how active pregnancy can be.

She told TODAY show: “Once it became clear to me how foreign it was to see a pregnancy performed like mine, it did get me thinking. Maybe I should continue to document my pregnant because it seems that we are misled to believe that we are more fragile than we really are.”

The common advice from doctors is that you can be as active as you were before pregnant with some modifications and after consultation with a doctor.