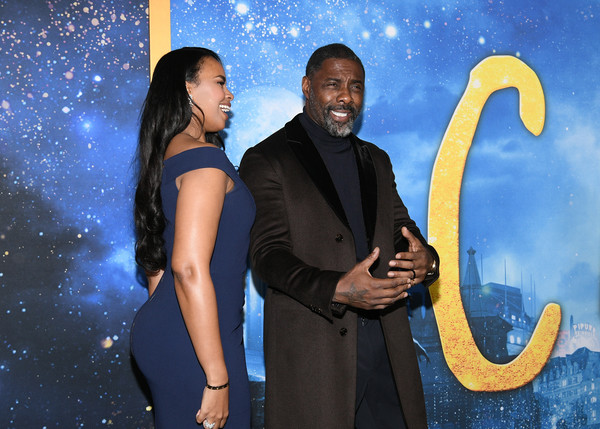 Last year, make up artist Naiyana Garth gave birth to her first child, a son, with actor Idris Elba, a former client of hers. The two aren’t married yet, but Elba did tell one news outlet that the two are engaged. The British-native is not the first make up artist to land a celebrity.  Here are 6 others:

In April, Elba welcomed his first child with partner makeup artist Naiyana Garth and last Saturday, he posted a photo on his Twitter account of little Winston innocently flipping the bird while breastfeeding with the hilarious caption, “I’ve been drinking, I’ve been drinking…Drunk in Milk” as a parody to a lyric in Beyonce‘s song “Drunk in Love” off her last self-titled album.
Funny stuff!
A couple years prior, in January 2012,singer Eric Benet (Halle Berry‘s ex-husband) also shared a photo (which has since been deleted) of his wife Manuela Testloni on Instagram also nursing their daughter Lucia  while she was unknowingly holding up the universal sign for peace.
Both celebrity men shared the photo because they found amusement in the finger gesture their respective babies’ were holding up when they snapped the pic, not knowing, perhaps or thinking in doing so, they would be de facto advocates for breastfeeding.
In fact, back in 2012,  Eric’s share sparked a bunch of controversy, online discussion and some public shaming of public breast exposure during breastfeeding. If it’s taboo when its seen in the general public, it’s become doubly taboo when shown in social media for many more to see. It’s a topic which we’ve seen come alive again recently when last March 2013, a famous athlete’s model girlfriend did the same thing and was virtually shamed off the web, accused of doing it out of pure vanity, not for the purpose of promoting nursing.
It looks like we may have evolved since 2012 and/or the vocal opponents to such natural images are realizing to keep their trap shut and deal with it and/or the image got buried in all the other news items that have been dominating our minds and news feeds.
Anyhooo. All are sweet and endearing and we encourage more of this type of sharing by celebs to help destigmatize public breastfeeding.
Kudos Idris and Winston (and mama Naiyana, of course)!
Winston is Elba’s second child; he has a daughter, Isan, from a previous marriage to Dormowa Sherma.

New dad for the second time, Idris Elba (Thor), has already been cast in the Jon Favreau -directed project set to film later this year.
Johannson would play the voice of villain Kaa, a python who hypnotizes and eats other animals; Nyong’o would voice Rakcha, a mother wolf who adopts a young human boy named Mowgli; and the ferocious tiger Shere Khan would be voiced by  Elba.
News surfaced last month that Johansson and fiance journalist Romain Dauriac are expecting although neither have confirmed the reports.

Check out an AOL video on the news

Yesterday, make up artist Naiyana Garth gave birth to her first child, a son, with actor Idris Elba, a former client of hers. The two aren’t married yet, but Elba did tell one news outlet that the two are engaged. The British-native is not the first make up artist to land a celebrity.  Here are 6 others:

Last night, some of our current and past Bellyitch Bumpwatch and other moms hit the red carpet to the  45th NAACP Image Awards at the Pasadena Civic Auditorium in Pasadena, California on February 22, 2014.
Scandal actress and first time mom-to-be Kerry Washington stunned in a custom Thakoon NY dress, Christian Louboutin shoes, a brada clutch and Suzanne Kalan ring.

Idris Elba, Best Actor nominee for  Nelson Mandela: Long Walk to Freedom  and Dad-to-be and with girlfriend Naya Garth, looked dapper in a fitted tux and Louboutin “Dada” flats while posing with 2014 Award season “It” girl actress Lupita  Nyong’o of 12 Years A Slave.  Elba won the award for Outstanding Actor in a Television Movie, Mini-Series or Dramatic Special for his role in Luther.
Nyong’o took home the Best Actress award for her role in that movie award and  looked amazing in a plunging neckline burnt orange Givenchy  pre-Fall 2014 gown with matching sandals and box clutch from the designer with her hair in a parted afro-puff. She acceneted the look with an H. Stern gold cuff and dangling earrings.

Our winner for best body winner actress Regina King, who was nominated for outstanding actress in a drama series, turned heads in Michael Costello, who seems to be the go-to designer for Black Hollywood but seemed to miss in this ill fitting black mermaid dress that looked to constrain the SouthLAnd  star’s toned torso too much.

We have covered mom and soon-to-be surrogate TV personality Sherri Shepherd of The View in the past and last night she worked magic in an off the shoulder shimmery Carmen Marc Valvo gown. The unexpected blue nails were a plus, with the statement accent pieces.

One of the very first moms we featured for being the first to have a reality TV special following her pregnancy, singer and actress Brandy Norwood, won the  Image award for “Best Supporting Actress In A Comedy Series” for her role on BET’s The Game.  She looked darling and sexy in a black cut out dress during the non-televised dinner show and again the next day during the televised portion of the show in a Jean Fares Couture black lace embellished gown with nude lining.

Even though she didn’t win for her wonderful and talented work in The Butler, advice mom to the world, Ms. Oprah Winfrey looked dazzling in her burnt orange dress while paying tribute to the late Nelson Mandela who we lost earlier this year.

Elba was nominated for Best Actor in the Motion Picture Drama  for his role in the Freedom, the Nelson Mandela biopic and for Best Actor Miniseries or Television Film for his role in the BBC criminal drama Luther.   He didn’t walk away with either Sunday night. There’s always SAG and the Oscars, both coming up where he is also nominated.
Nonetheless, the British actor has much to look forward to with Garth who looked radiant in a black floor-length Tiffany Rose gown.
The designer, which we have  featured before, has dressed our other current Bellyitch Bumpwatch moms-to-be Princess Madeliene of Sweden and No Doubt  lead vocalist Gwen Stefani.

Garth, a fellow Brit and celebrity make-up artist, tweeted to a friend in early October about being very early in her pregnancy.

She later deleted the account.
Despite being seen out and about at various events with Garth sporting a noticeable bump, Elba who stars in this Summer’s Thor  only confirmed the news  two months later in December.
This will be their first child together.  Elba has an 11-year-old daughter named Isan from his marriage to ex-wife Dormowa Sherman. They live in Atlanta.
Garth reportedly attended Waldegrave School for Girls in London, then West Thames College in West London., Hello Beautiful  recently noted., adding that Garth’s career in make-up artistry started with humble beginnings at local mall counters. She worked her way up in the business to eventually to work on the faces of Jamie Oliver, Rupert Everett, Simon Bird, Freddie Fox, and Elba, hence how they met.

And in stalking gorgeous men whose significant others’ are expecting news….

Idris Elba created Twitter mayhem this Saturday when he sent out a provocative tweet that referenced his manhood. See, it’s not just the female celebs who get off on attention. That tweet got retweeted over 7,500 times and faved about 8,600+ times and counting.

AND he kept at it with a follow up saucy Tweet about “releasing the beast” and acknowledgment of the furor and the fact he’s gotten a massive amount of new followers since it.

Expect to see men in big bow ties and other celebs hopping on the peen tweet bandwagon soon.

And it was only last December that he was finally admitting to the public that he and his girlfriend, make up artist girlfriend  Naiyana Garth  are expecting.