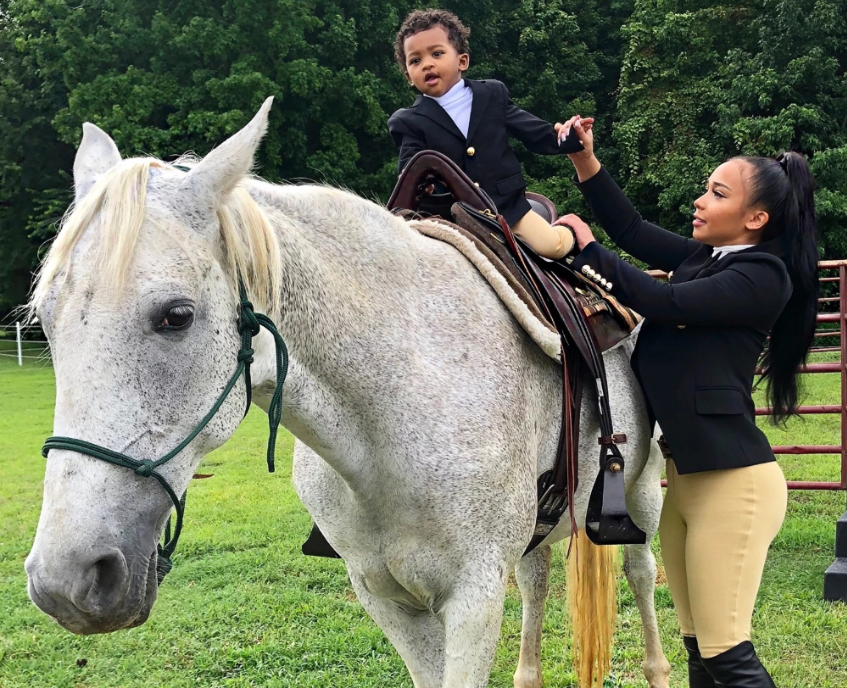 NBA star Tristan Thompson’s other child Prince Thompson is now actively starring in his mom Jordan Craig‘s Instagram and fashion and lifestyle brand after a year of being obscured by mom.

In a recent post, the Fashion Instagram and Lifestyle blogger shared a photo of herself and her son in equestrian gear as she helped the 1 1/2 year old mount a riding horse. Mom plugged a “mommy and me” blog post she wrote on her All Eyes on Jordy C blog. It was a tender letter to her son.

“Dear Little P, There aren’t many things that excite me these days, the way that watching you grow does,” she wrote. “Watching you grow and do things for the first time is such an addicting, fulfilling feeling! Whether it’s traveling the world with mommy or equestrian riding for the first time at just 1 year old…your expressions and excitement are always priceless. On this day you rode your first horse (3 to be exact) at Le Chateau in North Carolina. At first, you were very skeptical about these big creatures but of course in no time you warmed up to them and couldn’t get enough!!”

The post continued: “I can’t wait until you are old enough to see all of your photos and watch all of the footage Mommy is constantly documenting of your every move. LOL! You are such a smart and well rounded little gentleman! I can’t wait for you to experience your next adventure!!!” 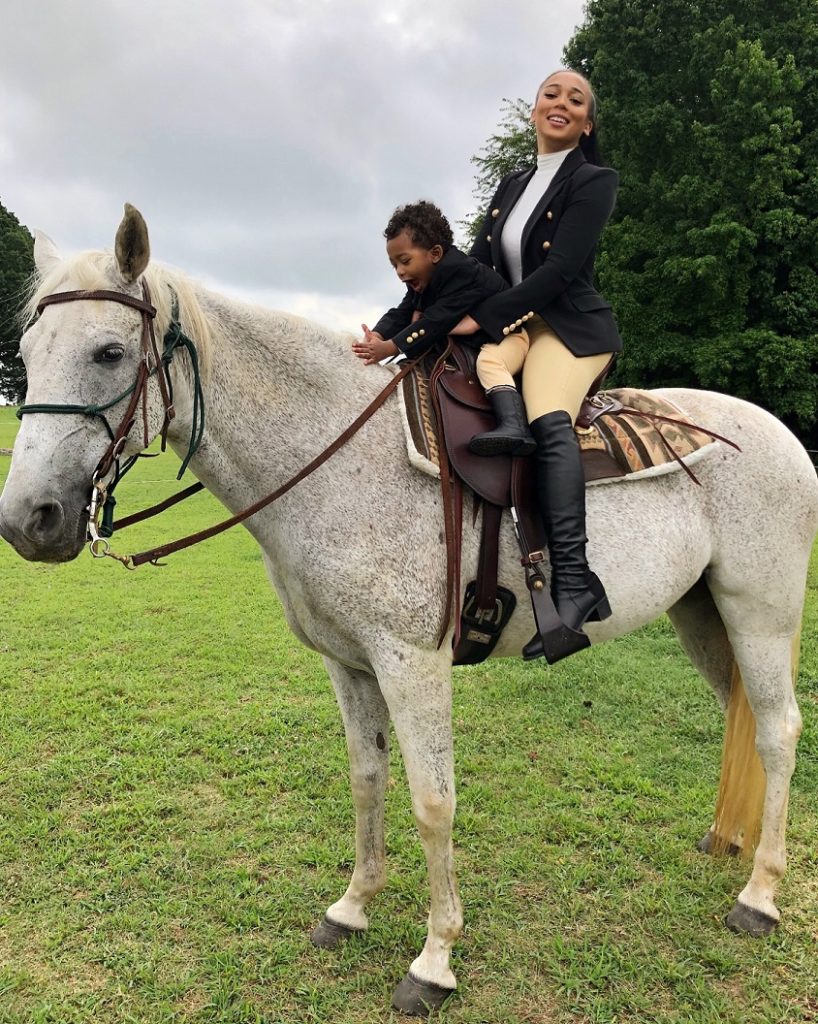 The post included other photos and marked only the second time she had shown her child’s face, a practice common among high profile individuals who aim to shield their children from the public eye. He had been featured before on her sites but not his face.

TMZ has previously reported insiders who said that Craig was upset when Thompson and his then girlfriend Khloe Kardashian started sharing photos of Prince that included his face on social media despite what she said she thought was an agreement to not do so. The first photo was an unveiling of an amazing playhouse fit for the son of a rich NBA star! ha! Very nice!

?Click the Link in my Bio for more Castle Reveal Photographs?Oh My Little P! Today is “Mother’s Day” to the world…but my day couldn’t begin without making sure I put a smile on your face first? I’ve been meticulously designing your Castle Playroom since I found out you were going to be a baby boy, while you were still living in mommy’s tummy! I am ecstatic that you love it and that it is up to par, meeting your standards being the little prince that you are! ? There’s absolutely no feeling in the world greater than bringing a smile to your face! Forever in love with being your Mummy? -A VERY Special Thank You to @C.Hubb_Studio for your creative carpentry and bringing my vision to life! -Little P’s Toddler “Prince Robe” from: @WrapMeBebe 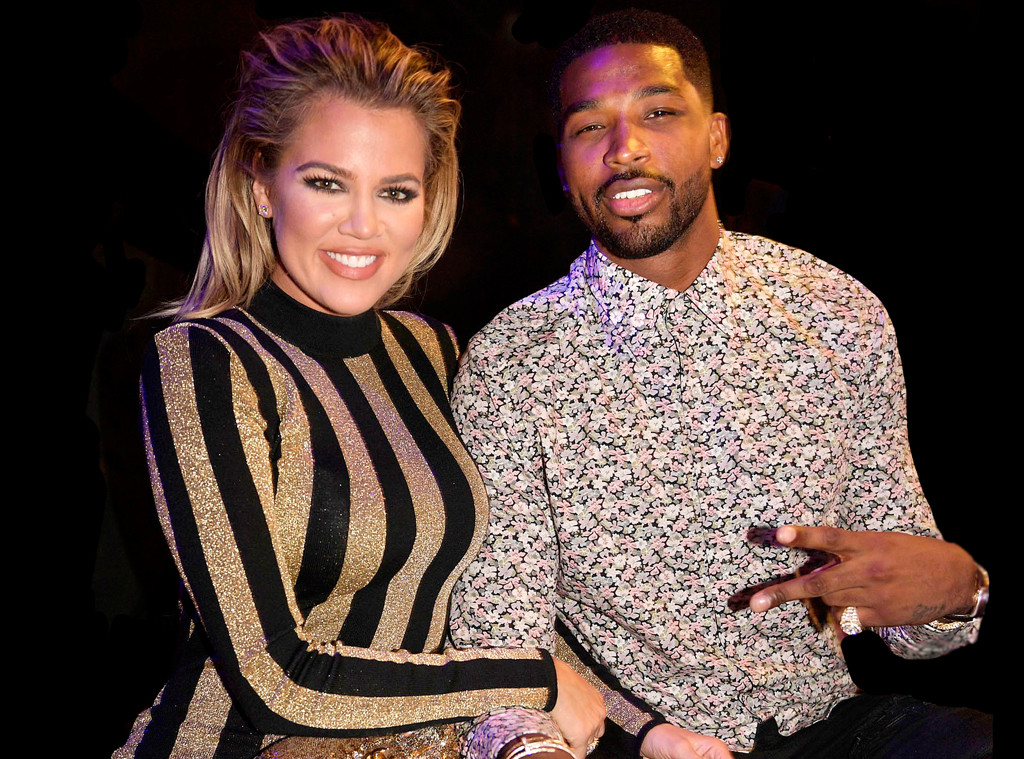 Congratulations to Khloe Kardashian on the birth of her first child, daughter, in a hospital outside Cleveland, Ohio this morning, TMZ reports.

Since then, the Revenge Body on E! host has been sharing a lot about her pregnancy experience through her personal app and website, from what’s inside her hospital bag to her pregnancy fitness and post-baby exercise routine.

The delivery comes on the heels of very public videos, suggesting that her beau since September 2016 was cheating on her with a woman in NY and a couple of other women at a hookah lounge outside DC last October. Neither Khloe, her family or Thompson have publicly addressed the reports.

Today, it was reported that the family is rallying around the youngest adult female Kardashian. (Her brother Rob Kardashian‘s daughter Dream Kardashian technically is the youngest Kardashian)

According to an insider to E! News:

the 33-year-old Keeping Up With the Kardashians star went into labor on Wednesday. After her water broke, the reality star went into labor for “several hours,” per another source. She then delivered the baby at a Cleveland hospital Thursday morning. Thankfully, her mother, Kris Jenner, her sisters, Kim Kardashian and Kourtney Kardashian, and her BFF, Malika Haqq, were all there for support.

“She labored with Kris all day on Wednesday,” the first insider said.

The first insider also said the baby’s father, Tristan Thompson, was there for the birth. The Cleveland Cavaliers player had a game against the New York Knicks in Ohio on Wednesday.

“He wants to spend as much time with the baby as he can,” the first insider added.

The birth came days after videos of Thompson kissing and being intimate with other women surfaced online. The second source told E! News Khloe is “distraught” over the allegations but is focusing on the baby. While the aforementioned source said Khloe wants the baby to have a relationship with the father, the insider also said she and Thompson are not on good terms. Khloe also reportedly plans to head back to Los Angeles as soon as possible and raise the child there.

The baby’s arrival was showered at a lavish pink baby shower earlier this year.

Congrats to Khloe and we are thinking and praying for a healthy recovery and that she overcomes this very stressful situation.

The baby also has a half-brother, Thompson’s 1-year-old son Prince from a previous relationship with Jordan Craig, who is first cousin to our other Bumpwatch alum, Eniko  Parrish Hart.