We scope the celebrity bump watch game so you don’t have to. Check out what’s new with our Bellyitch Bumpwatch moms to be this week, including some veterans who are expecting again:

Mila Kunis  is freaking out about her planned “natural” delivery (Classicalite)
Ali Larter chose to announce her second pregnancy on the Late Show with Jimmy Fallon. (Daily Mail)

“Leave Mila Alone!”
Star-Ledger reporter Stephen Whitty had some not-so-nice things to say about a recent 25 minute telephone interview he had with mom-to-be Mila Kunis while she was promoting her latest project, Third Person.
According to Whitty, Kunis assumed when he asked her in the beginning of the interview how she was feeling, he was referring to her pregnancy. The question led her to quickly shut him down, “I don’t talk about that for publication.” And it went downhill from there, he says.
The Philly Tribune summarized:

“Every question I ask over the next 25 minutes seems to strike her as either dull, insulting or burdened by some sort of agenda,” he writes.

Kunis appears less than impressed with the questions that follow – from her immigration to the United States as a child (“It’s the most mundane subject possible”) to her string of dramatic roles (“People have this misconception that comedy’s easy”). Then they touched on what made her take up acting in the first place (“There was nothing else to it. I don’t know if that’s the answer you’re fishing for.”) Ouch.

Some lay blame on the snippy interview on pregnancy hormones and another on the fact that there was another quasi-unflattering Marie Claire  interview that released that same day as the Whitty interview.
Which reminds us that the Jupiter Ascending star who is expecting her first child with fiance Ashton Kutcher did reveal to loving her new boobs in that Marie Claire piece.
“They’ve tripled in size. I was a 34A; now I’m a 36C. I’m so excited! I’m telling everyone I know, ‘Go ahead, touch them!’ Without being an asshole, I have to say, I love being pregnant,” she mused.
About the type of children she wanted to raise, she said, “I just don’t want my kids to be assholes. I feel like so many kids nowadays are. Both of us just want to have well-behaved, honest, nice children who people meet and say, ‘That’s a good kid.'”
Perfect answers if you ask us!

Here is what’s going on with some of the celebrity women whose respective pregnancies we are “bump watching” from various outlet reports around the web:
Christina Ricci and her husband James Heerdegen are expecting their first child.  Congrats! (Reveal)
Mila Kunis got her fitness on line dancing with her fiance Ashton Kutcher  at the StageCoach festival. (RadarOnline)
Meanwhile, also Monday, actress Rachel Bilson was showing off her bump while baby mooning with her beau Hayden Christensen in Barbados. (Daily Mail)

Stacy Keibler did too on her baby moon vacay in Cancun, Mexico with her new hubby Jared Pobre. (PopSugar)

Pregnant celebs were out and about confirming and sharing pics in traditional and social media this week. Here are a few we spotted:

Tila Tequila, former star of VH1’s A Shot at Love with Tila Tequila is preggers and posting up pics on Instagram (WetPaint)

Mila Kunis confirmed her pregnancy and her engagement to Ashton Kutcher officially on The Ellen DeGeneres Show. (YouTube)

Here is what’s buzzing about currently pregnant celebrities and celeb parents on various sites that cover them online and across the web today and earlier this week:

Chelsea Clinton showed off her bump while on a stroll this week. (Daily Mail)

Mila Kunis was showing off her growing belly too (E!Online)

Megan Fox showed off her sons Bodhi and Noah to Ellen DeGeneres.  (CelebrityBabyScoop)

Beyonce is rumored to be pregnant with her second child. (UrbanIslandz) 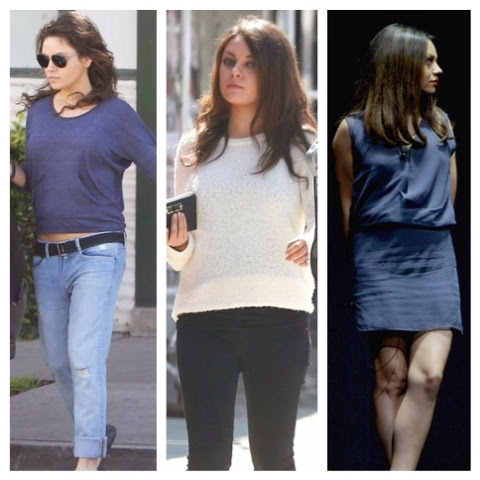 Since word leaked that Mila Kunis is pregnant with her and fiancé Ashton Kutcher’s first child, she’s been seen out and about and attended stage events in tops that are perfect for concealing a baby bump.
For anyone trying to keep a pregnancy under wraps, you’ll want to go with A-line or empire waist tops or dresses and dresses & blouses that billow and gap in the center.
This would be the future Mr. and Mrs. Kutcher’s first kid together.
0 comments

Less than 6 months after his divorce from ex Demi Moore was finalized and a month after his engagement to co-That 70s Show alum Mila Kunis, actor Ashton Kutcher is reportedly expecting his first child with Kunis.
Apparently the news was unplanned, sources tell OK!  magazine. The couple has dated for two years and Kunis was reportedly seen attending a pre-natal yoga class in Hollywood, California, E!Online  reports.
“It was a total shock for both of them, but they feel up for the challenge,” the friend told OK “It didn’t seem like it was possible for them to fall any deeper in love, but the prospect of raising an insta-family together has solidified their commitment to each other.”
Interesting too is that Kunis was recently named as a spokesperson for Jim Bean liquor.  We’ll assume it will be apple juice in the glass in the campaign.
photo:starcast