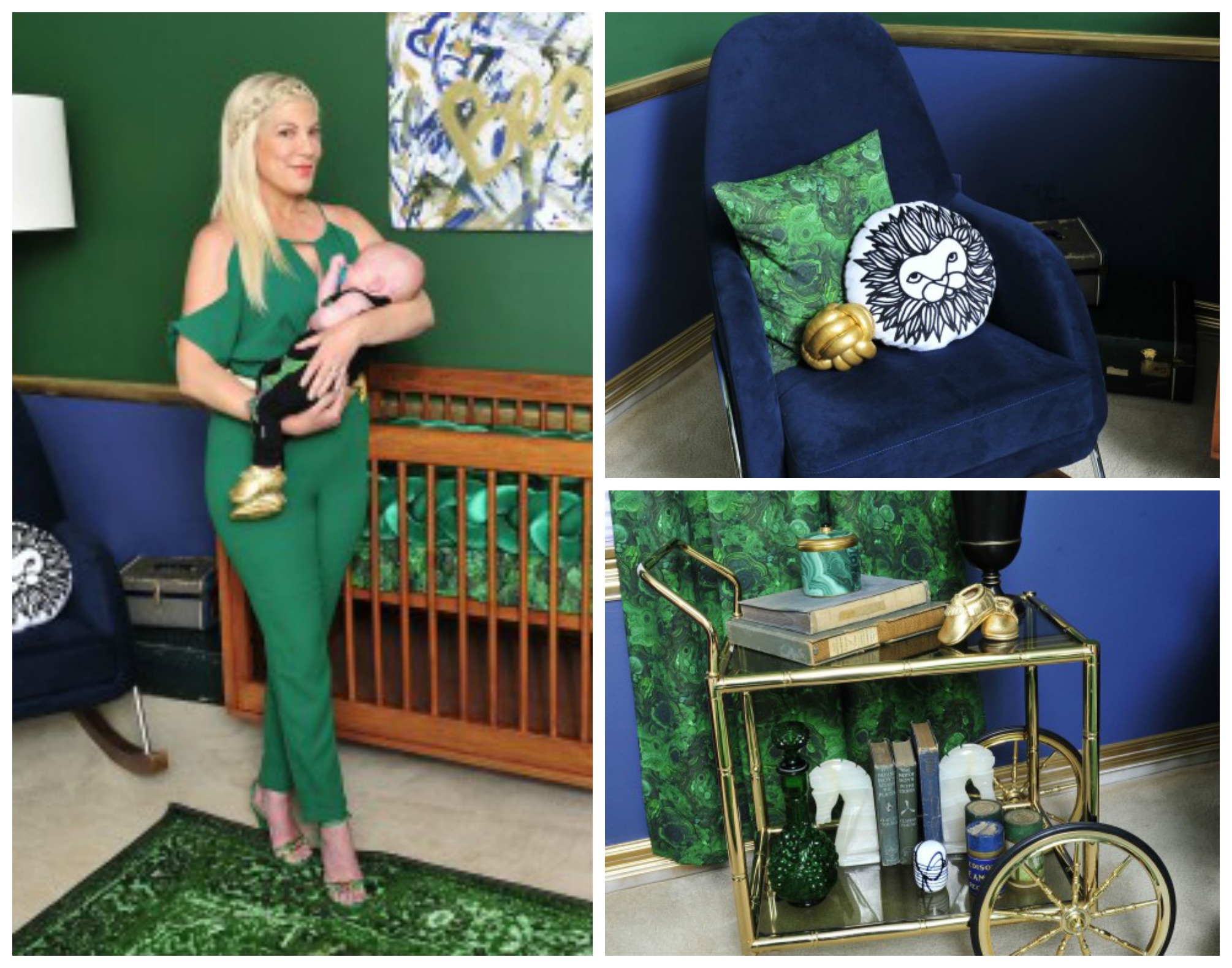 I saw Celebrity Baby Scoop went inside Tori Spelling‘s youngest child 5-month old Beau’s nursery and it caught my eye because of how ornate and it looked. She chose a strong emerald green as the dominant color and went with gold accents.

It was striking and different. You can peep it for herself here!

Belated congrats to Tori Spelling and Dean McDermott on the birth of their surprise baby and fifth child together, a son

The married for 10 years couple added to their brood on Thursday, March 2, her rep confirms to PEOPLE exclusively.

Spelling previously shared that her last pregnancy was unplanned.

“It was a total surprise,” Spelling told PEOPLE at the time. “But we always wanted a big family. I’m really excited.”

“We are over the moon in love with baby Beau. He is a true blessing and his brothers and sisters were overjoyed to meet him! We are all truly grateful for our big beautiful and healthy family,” Spelling, 43, tells PEOPLE.

I must admit that I enjoy that the Bey Hive is on patrol to shut down critics of Beyonce in the comment section to articles about her like this one below about her first major 3-hour shopping trip after announcing her news. Go Beygency, Go!

Oh and in other pregnant celebrity news, Tori Spelling posted a photo of herself at close to term on her social media account.

And after having very public and rumored relationships  with a bunch of our Bellyitch Bumpwatch alums like Mariah Carey, Jessica Alba, Vanessa Lachey, Jessica Biel, and Adriana Lima, ex MLB star Derek Jeter and his Victoria Secret swimsuit model wife Hannah Jeter are expecting their first child together since marrying

And now a repost of the E! article about Bey:

If you were browsing the racks at Barneys New York in Beverly Hills Thursday, you were in some special company.

Fresh off her 2017 Grammys performance and wins, Beyoncé made a rare public appearance at the luxury department store during its regular open hours and spent about three hours shopping.

The 35-year-old pop star, who is expecting twins with husband Jay Z, dressed casually in a black printed T-shirt and shorts and white sneakers and was accompanied by a group of bodyguards.

She did not buy children’s items. She walked through several floors, looking at designer gowns, purses, jewelry and shoes. She purchased a $1,225 pair of redIsabel Marart Laith leather knee-high boots, a pair of Ulla Johnson shoes and Nike sneakers, a source told E! News exclusively.

Beyoncé spent about 20 minutes in the store’s Barneys Bungalow, a specialty space where gowns from Prabal Gurung, J. Mendel, Lanvin, JC Obando, Monique Lhuillier, YSL and Manolo Blahnik and other designer brands, as well as luxury tuxedos and accessories, are displayed in honor of Hollywood’s award season. Several racks of dresses and other items were brought out for the singer, who sat on a light green couch.

“Beyoncé tried on several dresses but began not to feel well and was tired,” the source said.

“She seemed very nice and was very casual,” the source added about the singer’s visit. “She had several bodyguards around her and everyone in the store was chatting about her being there.”

The source also said Beyoncé has bought children’s items at Barney’s in the past.

The singer announced her pregnancy on Feb. 1 via a baby bump photo posted on her Instagram page. She followed it up with a full album of maternity pics, which also featured her and Jay Z’s 5-year-old daughter, Blue Ivy.

Last weekend, Beyoncé showcased her baby bump publicly for the first time, at the 2017 Grammys, where she won two awards and gave a much-talked about maternity-themed performance.

The 43-year old actress and TV host attended the event in a tan suede pencil length dress with nude sandals and her kids came with! It’s a package deal and they’ve grown up in front of cameras too being the star of various reality TV shows that Spelling has starred in over the years since each was born.

The Chopped Canada host said that she and the kids took a vote and decided to find out the gender of this baby.

“We have two of each, so we’re blessed,” she told ET. “We did find out with the first two, didn’t find out with the second two — huge, amazing surprises. The kids are old enough now they kind of want to find out, you know. We’ve taken a family vote so at some point we might find out but not yet.”

The Beverly Hills 90210 alum and reality TV star and her hubby Dean McDermott are already parents of Liam, 9, Stella, 8, Hattie, 5, and Finn, 4.

The couple told PEOPLE magazine in an exclusive interview this week that the pregnancy was unplanned.

“It was a total surprise,” the Beverly Hills 90120 alum said. “But we always wanted a big family. I’m really excited.”

During the interview, they joke about using a test from an old stash of tests they had laying around the house from 4 years ago when they were last expecting because they thought the papps or someone in public would see them buying one from the store.

They also joked about being the modern day “Brady Bunch” or the “McDermott Bunch” as Dean added. Funny.

In these modern times, you would expect giving birth to be a straightforward and nearly painless experience with little danger. However, that’s not always the case, and things can go wrong that are beyond anyone’s control. These celebrities all had difficult, dangerous pregnancies and birth experiences that could have resulted in their deaths.

Check out Celebrities Who Came Close to Death While Giving Birth

Forgive us for being offline for a major part of the day today. We hit 7 million page views for some odd reason and the server crashed! Lessons learned. We’re back up…but absent fresh content.

Unforgettable star Daya Vaidya shared a photo of the scrumptious BakedByMelissa cupcakes she received during her baby shower this past spring May 20. Vaidya and her hubby are expecting identical twin boys to join their family which already includes their adorable daughter, Leela.

These days it is not uncommon to have brands present and sponsor celebrities’ baby showers and gift them with many items from their lines.

Here are other celebs on their baby shower days through the years as featured in People’s CelebrityBabies pages and other sources. Too cute!

Hattie McDermott, daughter to Tori Spelling and Dean McDermott
the following could have been fertilized around then too ..

Eddy and Nelson Angélil,sons of Céline Dion and Réne Angélil, who were conceived via in vitro fertilization

Gideon Scott and Harper Grace, the son and daughter of Neil Patrick Harris and David Burtka who were blessed to them via a surrogate