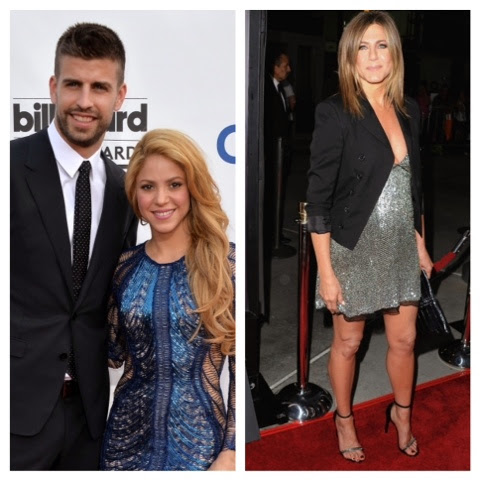 In around the bump news, Shakira confirmed that she and beau Spanish soccer strar Gerard Pique are expecting their second child in this month ‘s edition of Cosmopolitan in Spanish.
Meanwhile, amidst revelations that Angelina Jolie and Brad Pitt married last weekend at their French chatteau in France, Pitt’s ex-wife Jennifer Aniston shot down rumors that she and fiancé Justin Theroux are expecting.
Images (above) of Aniston with a bubble in the center of the sequined mini dress she wore during Wednesday’s LA premiere of her latest project, the dark comedy Life of Crime, sparked rumors that she was pregnant.
She shot down the rumors sharply on TODAY, telling Carson Daly, “I’m not pregnant!” and adding that her “value as a woman” is not defined by motherhood.
She also expressed frustration about being constantly asked if she was pregnant.
I bet!
By Jeneba Jalloh Ghatt
Kelly Rowland stays fit even in third trimester
6 tips for helping baby sleep through the night