Aaah! First come love, then come marriage, then come Beyonce with Blue Ivy in a baby carriage.
Perhaps to silence the numerous conspiracy theorists who do
not believe megastar Beyonce Knowles was actually pregnant with her daughter Blue Ivy and hired
a surrogate to carry her instead, Bey and her husband Shawn “Jay Z” Carter showed a nude bump maternity
portrait in a video slideshow during their joint performance last week.
During their performance of “Young Forever” and “Halo” at the
Saturday, September 13th show at the Stade de France in Paris at a
show taped and aired for HBO, the background video also included video of the couple exchanging
their vows in their New York city apartment in 2008 and Mrs. Carter holding
baby blue shortly after giving birth to her with the hospital monitors in the
background.

I suppose the reason she didn’t share them immediately was
to avoid coming off reactionary and as if she was validating the rumors by
responding.  But needless to say, the
extensive time lapse will still induce naysayers. They said the ultrasound video flashed during her 2013 HBO show didn’t convince them. Neither did paparazzi photos of the couple while Beyonce was about 6 months pregnant and wearing a bikini. This may not either.
Though, clearly,  in photos a
couple of years ago, while she was pregnant, one  could clearly see weight gain in Bey’s face,
neck and arms which are classic for pregnant women and a pretty hard thing to
fake when you’re not really preggers.

Needless to say, it is quite very possible that the die-hard
naysayers and haters will still doubt the authenticity of the images.
Oh well! Leave them with their “beliefs” we say.
Doubters will always doubt.  Think about it. There are people around today who still believe Elvis and
Tupac are alive, that the moon landing and the September 11 attacks never really happened and that aliens captured the missing Malaysian flight…though where
did that plane go? Really now? Ha!
Check out the whole performance with the video here: 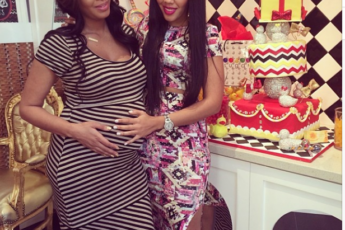