The  Liberian nurse featured in Time Magazine’s 2014 declaration of the “Person of the Year: The Ebola Fighters” has died in childbirth.

Tragically, her death is likely a direct consequence of the ongoing stigma attached to those who once suffered from the disease.

Salome Karwah contracted Ebola “but recovered, unlike most people who contracted the disease,” Time wrote in a feature about Karwah yesterday. Her survival made her immune to the disease and a fierce warrior in the fight because she was among the few who could treat patients without hesitation and fear.

As the pandemic subsided, the stigmatization of those who once had it lives on.

After the outbreak, Karwah eventually married her fiance James Harris, change her name to Salome Harris and had her third child, a daughter who she named Destiny. She got pregnant again and delivered her fourth child, a healthy baby boy she named Solomon,  earlier this month, February 17, via C-Section.

She left the hospital three days later but within hours of coming home, Karwah lapsed into convulsions.

Her husband and her sister rushed her back to the hospital, but no one would touch her, Time reported. She foamed at the mouth with violent seizures which panicked the staff.

“They said she was an Ebola survivor,” her sister Josephine Manley told the magazine by telephone. “They didn’t want contact with her fluids. They all gave her distance. No one would give her an injection.”

Karwah died the next day. “My heart is broken,” Manley said. “Salome loves her children, her [fiance] James. The one-year-old, the newborn, they will grow up never remembering their mother’s face.”

While the cause of the convulsions is unknown to Manley, she thinks something went wrong in the surgery. Still, she insists that if her sister had been treated immediately, she might have had a chance.

Instead, “she was stigmatized.”

Her death devastated those who were aware of Karwah’s tireless efforts to save people’s lives.

“To survive Ebola and then die in the larger yet silent epidemic of health system failure… I have no words,” said Ella Watson-Stryker, a Médecins Sans Frontières (MSF) health promoter who worked with Karwah in Liberia and was also among the Ebola Fighters on the 2014 cover.

Devastating. Our thoughts are with her family and friends. 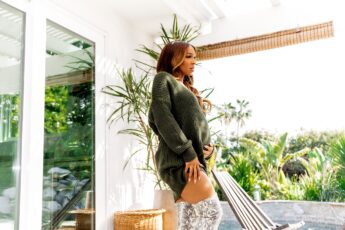