Second-time mom-to-be R&B crooner Ciara has been mixing up her red carpet and event arrival style, not sticking to any one color pallete or look.

Most recently, the designer muse looked regal in a royal red velvet fishtail train dress by Jovani while attending the 2017 Vanity Fair Oscar Party hosted by Graydon Carter at Wallis Annenberg Center for the Performing Arts on February 26, 2017 in Beverly Hills, California.

The day before, the gorgeous model went with a textured off white gown under a champagne chartreuse opera coat  by August Getty Atelier while attending the annual Elton John AIDS Foundation Oscar-viewing party on February 25, 2017 at The City of West Hollywood Park on February 26, 2017 in West Hollywood, California.

She is even staying on trend, donning a black choker to accessorize her black sheer top and on-trend big loose palazzo pants she wore under an Off-White striped duster coat to the Warner Music Group Grammy party at Milk Studios back on February 12, 2017 in Hollywood, California.

And her casual looks are on point too. Usually makeup less, she rocked all black during a date night with the hubby in West Hollywood and was fresh-faced chilling one day in a chic IG pic she posted on her Instagram account a couple weeks ago, and in a recent out-and-about photo with her son Future Zahir on her back.

Get it Ci-Ci! Shoe em how Maternity Glam-Chic is done. (smile) 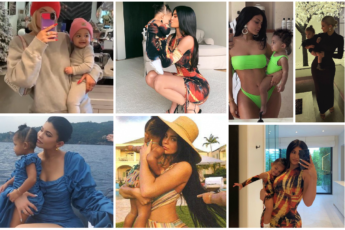