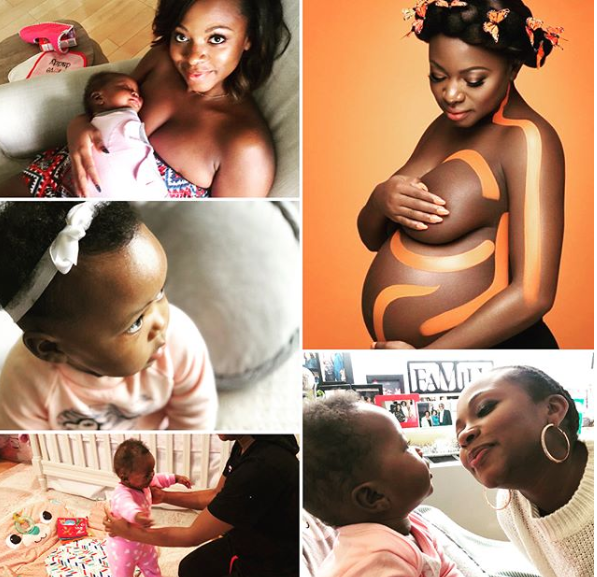 Were we just now putting STARZ channel  POWER‘s Naturi Naughton in the bucket of celebs who keep their children off of the public eye and out of social media? Well, at the dusk of Mother’s Day, the actress and singer finally shared a photo of her daughter, Zuri, on her Instagram page and she is just as gorgeous as we’d expect.

“On #MyFirstMothersDay I am filled with gratitude and humility,” the 3LW Girlband alum captioned a photo collage and slide show of her journey to motherhood that included a photo of her own mom as well. “Thank you, God, for choosing me to be #Zuri’s mommy, and Thank you, God for giving me a beautiful mother who is my shining example!”

Naughton and her beau Ben welcomed Zuri last year. The baby girl will celebrate her first birthday this July! So sweet!

Even though actress Naturi Naughton is counting down the days until she welcomes her first child with her longtime beau Ben, she hasn’t stopped working.

In fact, the petite bombshell has been making the rounds at Upfronts and other talk shows promoting this season of her hit STARZ network show, POWER.

Naughton, who is also famously known for being one of the three original band members of the 2000s R&B singing group “3LW” along with Adrienne Bailon, plays the family matriarch on the show opposite football player turned actor Omari Harwick who serve’s as Naturi’s onscreen husband. James “Ghost” St. Patrick.

A few weeks back on June 26, she stopped by ABC network morning show Good Morning America to promote the show alongside her co-star and the show’s executive producer Curtis “50 Cent” Jackson, who plays villain and  Ghost’s arch nemesis Kanan.

On her character, Naughton explains, “Tasha really evolves. She becomes a stronger woman,” adding about the power couple mom who must stay strong and take over the family when her husband is sent to jail for a crime he didn’t commit. “She also kind of takes control as a mother. Ghost is in prison and, honestly, she has to pick up the pieces. When you watch this season, you’re going to be like, ‘He left her with a bunch of mess.’ We don’t know what to do because our lives are kind of shaken.”

Host Robin Roberts sent the mom to be off with some gifts including  onesies with the words “Girls Have Power” and “I Love Uncle 50” with a tray of Rice Krispy Treats which Naughton expressed in an recent interview has been on of her pregnancy cravings.
Watch

Power‘s Naturi Naughton had the most elegant African “It Takes a Village to Raise a Child” themed baby shower last month at the Dazzler Hotel in downtown Brooklyn.

Naughton and her longtime beau Ben celebrated the impending arrival at a very festive and exquisitely decorated forum which was also star studded and attended by her co POWER star LaLa Anthony, actresses Regina King (American Crime, The Leftovers) and Nicole Beharie (Sleepy Hollow)  and a Grimm star Russell Horsnby and The Game actor Hosea Chanchez.

“I loved my Afro-Centric theme: ‘It Takes a Village to Raise a Child.’ Primrose Couture Events designed the perfect tribal décor with a village vibe, infused with my Caribbean roots,” the petite star told PEOPLE magazine.

The couple also used the occasion to announce the gender of the baby.

“It’s a girl! My man [longtime boyfriend Ben] and I totally predicted a boy at first,” the former 3LW girl band member told the magazine. “I was so sure because I am having such an easy and stress-free pregnancy and I had heard all these stories about how girls steal your beauty and make you really sick when pregnant. Well … so not true for me.”

Ha! We know that’s right. At her shower, Naughton looked stunning and glowed in a white lace frock with her loose ringlets adorned in a light floral crown.  Guests noshed on gold covered oreos, macrons, cake pops, and other tasty delectables perfectly decorated in the theme’s colors of gold and green and had fun cutting up in the photo booth.

Congrat to @naturi4real and Ben on their bundle of joy! #eleganciaentertainment #photobooth #openair

A post shared by Elegancia Entertainment (@elegancia_entertainment) on May 8, 2017 at 6:00am PDT

But as the night went on, the guests let their hair down and can be seen “jumping up” to some soca music from the Caribbean.

And Naughton, who is also a rapper and excellently played rapper Lil Kim in the movie about the Notorious B.I.G. on the big screen, revived her role on the dance floor to a Lil Kim song.

@kessaul and @djcrius had this baby shower on another level #naturibabyturnup we only choose the best vendors ??

A post shared by Primrose Couture Events, LLC (@primrosecoutureevents) on May 14, 2017 at 5:13pm PDT

Naughton told PEOPLE she’s “still feeling pretty good,” but is dealing with one issue many women who have been through pregnancy can relate to.

“I’m definitely experiencing the swelling of the feet now though, which sucks, but hey, I get a foot rub every night so I’m loving that part!” she joked while adding that her fave indulgent and cravings are Rice Krispies Treats.

“She puts peanut butter in them and they taste like heaven!” Naughton says. “I can tell the baby is loving them too because there’s a happy dance in my belly after my snack time.”

Naughton and Ben are not sharing the baby girl’s name until she arrives.

“I think we are 90 percent settled on a beautiful name that we both love,” adding that she and Ben will decide for sure after her birth but other aspects of baby prep are coming along.

“The nursery is coming together, and it’s hard to resist all the adorable baby girl clothes out there, so her wardrobe is in full effect” she said, though the event is not set to arrive until July so she still has a little bit of time to pull together the last minute nesting.

And July cannot get her fast enough as Naughton is already prepping to be a “mommy and me” type of mom.

“Dressing alike, mommy-daughter day dates, singing together and teaching her all the important things I learned from my mother,” Naughton told PEOPLE what she is excited about. “I just want to give her a strong foundation, so she can navigate this crazy world by being a strong and beautiful little girl.”

Here are some photos that her event coordinator and designer Primrose Couture Events shared on their Instagram feed, as well as other guests.

A post shared by Primrose Couture Events, LLC (@primrosecoutureevents) on May 7, 2017 at 7:15pm PDT

A post shared by Primrose Couture Events, LLC (@primrosecoutureevents) on May 7, 2017 at 7:27pm PDT

A post shared by Primrose Couture Events, LLC (@primrosecoutureevents) on May 8, 2017 at 5:43am PDT

A post shared by Primrose Couture Events, LLC (@primrosecoutureevents) on May 8, 2017 at 6:14am PDT

A post shared by Primrose Couture Events, LLC (@primrosecoutureevents) on May 8, 2017 at 6:16am PDT

A post shared by Primrose Couture Events, LLC (@primrosecoutureevents) on May 8, 2017 at 6:22am PDT

A post shared by Primrose Couture Events, LLC (@primrosecoutureevents) on May 8, 2017 at 6:22am PDT

A post shared by Primrose Couture Events, LLC (@primrosecoutureevents) on May 8, 2017 at 6:27am PDT

A post shared by Primrose Couture Events, LLC (@primrosecoutureevents) on May 8, 2017 at 6:50am PDT

Thank you so much @elegancia_entertainment for this custom photo booth! Everyone loved it

A post shared by Primrose Couture Events, LLC (@primrosecoutureevents) on May 14, 2017 at 5:16pm PDT

Naturi Naughton, the Starz  channel star of the hit show Power  has been looking fabulous promoting her various projects and hitting red carpet arrivals. The former 3LW singer and her beau Ben are expecting their first child together later this year.

This week, the beautiful petite actress headed to the AT&T and Tribeca Host Luncheon AT&T Presents: Untold Stories – an Inclusive Film Program in Collaboration With Tribeca event during the Tribeca Film festival. She rocked a sleeveless Ronny Kobo dress and jewels by Erickson Beamon and super cute sunflower pumps.

More recently, this morning again, she stunned on the Wendy Williams show outfitted in a dress by Hemant & Nandita, jewels by Erickson Beamon and Bliss Lau and shoes by Sergio Rossi while promoting season 4 of her hit Starz channel show.

And earlier this month, she was glam and fab at the New York special screening event of  the new STARZ  show The White Princess hosted by STARZ & Refinery29 at Metrograph on April 5, 2017 in New York City.

She and the dad-to-be spent a baby moon in Hawaii a few weeks back. Naughton shared a photo of her spouse toting her on the beach. Sweet!