One Virginia dad-to-be took pregnancy empathy to another level when he decided to don a fake baby belly while working out with his wife at their Virginia Cross Fit gym.

When 9-months pregnant, Kristin Milchuck headed out to the gym every morning six days a week with her husband Blake Milchuck. One day, one of the couple’s coaches at at CrossFit Krypton in their hometown of Chesapeake, Virginia, suggested that Blake sport a faux belly to really see what it’s like for his wife at the gym.

He strapped a 14-pound medicine ball with duct tape and began their work out, which included running, modified burpees, rowing and biking.

“It was different,” Blake Milchuck told ABC News. “You definitely feel the frontal load, so things that I can normally do pretty easily weren’t as easy.”

The gym made a video of Blake’s workout which quickly went viral on Instagram with more than 18,000 people watching the funny video.

@kmilchuck is a badass and still hitting the gym, figured i could be a good sport and see whats its like #37week #14lbbaby #noteasy #Repost @crossfitkrypton with @repostapp ・・・ @milchuck_blake being a good sport feeling how he’s made his wife feel for the past few months ? Congrats on your soon-to-be new addition! #crossfit #kryptonstrong #crossfitgames #crossfitkrypton

Blake said the experiment helped him appreciate his wife and it helped her laugh, which “was the main purpose,” he added.

“It’s different at times to understand where your wife is coming from with the pregnancy … so doing something like this makes it a little bit more fun for her, which makes it fun for me,” Blake Milchuck added.

The couple welcomed a baby boy they named Brayden.

“Its a Boy….Were a little tired after our first day with Brayden but have loved every second of the experience,” Blake captioned a joyful photo of the family yesterday evening. “@kmilchuck killed the pregnancy game and is already killing the mom game. #fullheadofhair #doinggreat”

Its a Boy….Were a little tired after our first day with Brayden but have loved every second of the experience. @kmilchuck killed the pregnancy game and is already killing the mom game. #fullheadofhair #doinggreat

By now the couple should have welcomed their newest addition which is due around this time. Sweet story!

After a very bumpy and rocky Season 18, the ABC round table daytime talk show The View returns  for Season 19 this September with several of our Bellyitch Bumpwatch alums in signature positions.

Full House  star Candace Cameron Bure, who will reprieve her role as DJ Tanner in a much-anticipated Netflix b revival of the 90s show, will be one of the main panelists.

She will join a returning Joy Behar along with cast regular Whoopie Goldberg, Michelle Collins, and Raven-Symone and another new member Paula Faris of ABC News.

Other Bumpwatch alums include former host Sherri Shepherd, Top Chef’s Padma Lakshmi and actress model Molly Sims, who will fill in occasionally as a rotating team of contributors. Also rotating will be What Not to Wear vet host Stacy London, Republican strategist Ana Navarro.

What a diverse cast!

A Michigan couple, told after a sonogram to expect a baby girl, were surprised to discover on the birth day that the baby was actually a boy.

Twenty weeks prior, Danielle Williams obstetrician had told her and husband Kyle Williams.

“When the doctor poked his head up and finally announced it was a boy, she thought it was a joke,” Kyle Williams told ABC News.

Danielle’s doc, Dr. Laura Corio, a gynecologist with Mt. Sinai Hospital in New York told the station she had never seen a mistake like that with any of her patients.

“The technology is so good nowadays you can really see the baby — especially if it’s a boy” she said. “The point of the sonogram at about 20 weeks is to check for the important stuff like brain development and the chambers of the heart…Sex is impossible to confirm without a test like an amniocentesis that looks at chromosomes.”

However, studies show that between 11 and 14 weeks, there is an 80 to 97 accuracy  of such tests and by 13 weeks none of the subjects in two separate studies had their fetus incorrectly identified.

The entire surprise moment was captured on video and has gone viral and made its way through several news channels who shared it.

Watch the surprise moment captured on video when they later surprised the grandmother by asking her to change the diaper of their new baby: 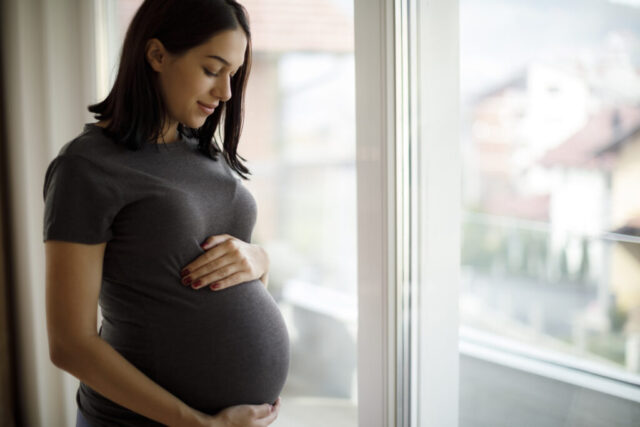 The news that a Boston area woman gave birth one hour after discovering she was pregnant isn’t that surprising. Not when you consider that the hospital where she gave birth in, South Shore Hospital in Massachusetts, stated that it happens once or twice a year there.
It’s common for overweight or obese women to miss pains of pregnancy and weight gain, ABC News senior medical contributor Dr. Jennifer Ashton said.
In fact, that was the case here.
New mom Katherine Kropas told reporters that she thought she was just a little bit heaver from holiday indulging.
A  2002 Berlin study discovered that 1 in 475 women did not realize they were pregnant until they are 4 months along in their pregnancy and one in 2,455 didn’t realize it until they went into labor.
Intense back pains brought Kropas to the hospital this past Tuesday, January 7, and an ultrasound solved the mystery.
“They took one look, and they rushed me off into labor,” she told ABC’s Boston station WCVB. “I found out that I was having a baby at 10:15. She was born at 11:06 p.m.”
Amazing and sad because in these situations, the babies lack crucial pre-natal care.
h/t: USA Today.

Last week, singer and The Game actress Brandy Norwood told Queen Latifah she planned to freeze her eggs for a baby in the future.
And on this anniversary today of the tragic Boston bombings, we are reminded that it was last year around this time that Modern Family  actress described the process of freezing her eggs in an interview on Good Morning America.
Vergara, who is currently 41 and dating a guy who is three years younger than she is and who never had a child said last year she wanted to preserve the opportunity to bear him a child.
“I just wanted to plan ahead,” Vergara told ABC News of the possibility of more children.
“I have my son, Manolo,” she said of her 21-year old son from a previous marriage who was studying in Boston at the time of the incident. “It’s not an emergency for me to have another kid, but for Nicky, he’s never had a baby.”
She admitted to consulting a fertility specialist.
“Nothing happens that naturally anymore,” she said of her options for having more kids at her age. “I wanted to take advantage of science. Why not?”
She added, “I wanted to make sure I already froze my eggs. I wanted to take advantage of science,” adding, “I took them out already. They’re in the refrigerators. Hopefully, they’ll be fresh by the time I use them.”
Watch the clip: