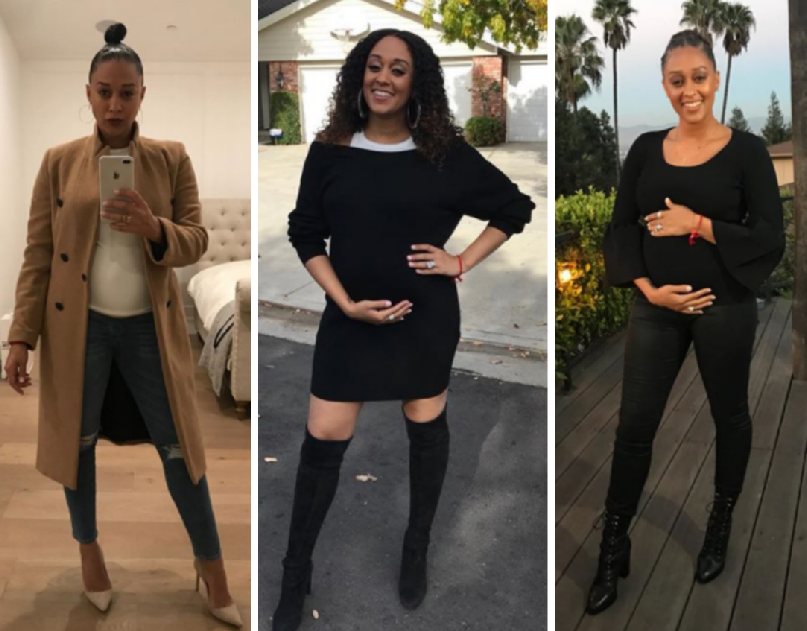 Last week, the Black Entertainment Television (BET) network launched a new reality TV (docuseries) about a tight-knit group of women in the elite world of urban Hollywood at a party in tinsel town.  The show is called About the Business and it stars a Bellyitch alum Eva Marcille and current mom-to-be Crystal Renay (real name Crystal Williams), who recently tied the knot with her R&B beau Ne-Yo (real name: Shaffer Chimere Smith)

The show features the women getting on their daily grind by day and by night balancing career family and their African American celebrity circles, a release from the network states.  Two other reality TV moms-to-be attended: Draya Michele of VH1‘s  Love and Basketball and  Love and Hip Hop: Hollywood castmember Masika Kalysha

It looked like it was a bump-filled event!  Nick Cannon and Ne-Yo will cameo on the show.

I thought this video of all of us beautiful women is so cute! ???? #mommytobe #AboutTheBusinessBET

Tuesday, during The Queen Latifah Show, singer and star of BET‘s The Game Brandy Norwood told Latifah that she plans to freeze some of her eggs at her next doctor’s appointment.
The mom to 11-year old daughter Sy’rai, said she was “hopeful but realistic” when it comes to having additional children.
“Chances are looking a little slim for the future kids. I’m 35,” Norwood told Latifah. “I feel like my next doctor’s appointment, I’ma have to freeze my eggs. I’m not sure if I’m going to have more kids; I’m hopeful. I have faith.”‘
She also said she avoids exposing her daughter to the limelight so she could grow up as normal as possible.
“I like that our life is simple,” she added. “I like keeping the sense of normality to our life”
In 2002, Brandy became the very first celebrity to showcase a pregnancy, labor and birth on reality TV when she starred in an MTV Diary special about it, “MTV special Diary Presents: Diary – Special Delivery”.
And true to Reality TV poor record with couples featured on it, Norwood has long since split with Sy’rai’s dad producer Robert “Big Bert” Smith.
Photo: The Brandy Blog

watch a segment from the appearance here:

Some of our past Bellyitch Bumpwatch moms rocked the red carpet and stage to the 2014 BET Honors this past weekend during its Saturday, February 8th taping at the Warner Theater in Washington, DC.

Tamar Braxton-Herbert brought Hollywood Glam to DC in a Gold figure hugging evening dress on the red carpet. During the performances later, she paid tribute to Gordy, singing songs of one of his most famous proteges: Diana Ross. The VH1 reality TV star of The Braxtons and Tamar and Vince channeled the iconic diva in another curve hugging wine-colored dress with a plunging neckline that also showed off her super trim post-baby body. The TV co-host of Fox‘s The Real sang some of Ross’s biggest tunes, including the chart topping and memorable “Upside Down.”

Mariah Carey headlined and opened the show with a song from her upcoming album in a sexy dress revealing mucho boobage.  MiMi didn’t walk the red carpet but she was spotted carrying daughter Monroe into the theater (see photo in collage below).

Wow, Mariah! After showing all that leg on the red carpet, Hudson went demure in a whit pant suit while signing her tribute to honoree Aretha Franklin. She and singer-songwriter phenom Janelle Monae  who did a tribute to Gordy met up with the legend back stage.

The show airs on Monday, February 24th at 9pm ET on BET.
photos: Getty for BET