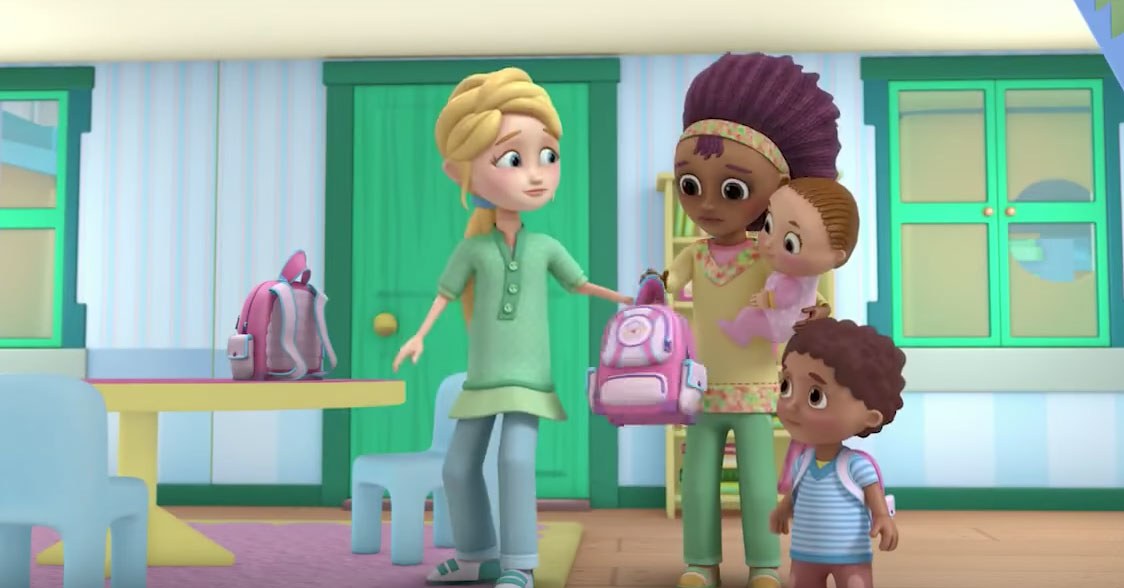 To perhaps make it less of a big deal and more normal, the show was not about the same sex couple being lesbians but taught kids how to prepare for an earthquake.

The lack of fanfare toward this inclusivity appears to be the first step in reflecting the world as it is, a Mashable report on the episode aptly summarized.

“I always envision Doc McStuffins as a show about what it means to accept everyone as part of our communities,” said the show’s executive producer Chris Nee in a GLAAD blogpost. “As part of a two-mom family, I’m proud to have an episode that reflects my son’s world, and shows everyone that love is love in McStuffinsville,” said Nee, who also wrote the episode.”

Disney’s first Latina princess is here and so is the trailer to the television series she stars in: Elena of Avalor.

Princess Elena Castillo Flores is empowered, a skilled sword fighter and is set to gain political control over her kingdom. No, she is not the typical damsel in distress princesses of yesteryear who waited in a tower to be rescued by Prince Charming. (No offense Sleeping Beauty, Cinderella and Snow White). Really, ever since Brave, princesses haven’t been the same [See Brave‘s Merida, Rapunzel and Frozen‘s Anna] (smile)

On the cusp of ascending to the throne as Queen, Elena, the rebel does the dirty work to protect her land. She’s pretty bad a*#@!

Yeah, we said it!

Elena will be voiced by actress Aimee Carrero (Young & Hungry), who was born in Santo Domingo, Dominican Republic before moving to Miami, Florida.

Unlike other Disney Princesses introduced in a motion picture, Elena of Avalor is a TV series which starts July 22nd.

And unlike “Sofia the First“, Disney’s first attempt at a Latina princess before facing backlash that she was too white, Elena is 100% Latina and has deep olive skin tone, and is not of mixed heritage as Disney was forced to reveal about Sofia amid the firestorm. (Read about that controversy HERE)

by Monica Marino at Mode

Have you ever wanted to see the real life reference models that Disney’s animation team used to create some of the physical appearances, facial expressions and mannerisms of some of your favorite Disney characters?
Zimbo put together a pictorial with background insight into the women who helped bring these characters to life, including Maleficent from Snow White above:

See the complete list and read the back story HERE!

When our kids’ school is out, we get an email or an automated call or perhaps we get the word watching the local news.

Too funny! Check it out: “School is Closed”:

Officials are blaming the recent measles outbreak at Disneyland parks on a kid of “anti-vaxxers”, parents who refuse to immunize their children from deadly diseases,
Apparently, as the theory goes, somebody’s non- vaccinated kid caught the measles while traveling abroad then went to one of the Disney Parks in California and sneezed.  It was the little action needed for all the other anti-vaxxer kids at that park to be exposed and come down with the deadly disease.
Sheesh!
A total of 64 children since December in California have contracted the highly contagious disease, a likely impact of the anti-immunization movement, the Washington Post reports.
The Centers for Disease Control and Prevention state that measles is so contagious that if “one person has it, 90% of the people close to that person who are not immune will also become infected.”
And there you have it. We knew it was coming.
The outbreak has gotten so bad, California officials issued a warning telling anyone under 12 who is not vaccinated to avoid Disney, the Los Angeles Times reported.
Disney has told its employees in contact with measles-sickened co-workers to stay home until they can prove they’ve been vaccinated and undergo a blood test.
It’s a case of too much education, a new study says, finding that anti-vaxxers are affluent, educated and cluster in certain communities and infect each others’ thinking on the issue.
It’s unfortunate. As I’ve blogged before, I could have died from catching German Measles while a small child living in my native Sierra Leone, West Africa decades ago. Vaccinations were a premium and privilege that all kids did not get back when I was growing up.
My best friend and I contracted the disease at the same time and he died.
It is for this reason, I am always baffled by those who decide against vaccinating their kids, and to take their chances, believing they are protecting their kids, and not putting them as risk for early death. A report in 2011, found that the study that catapulted the modern anti-vaxx movement was a big fraud.
Baffles the mind!
Sound off in the comments. Risk worth taking or reckless option to not vaccinate?

Nearly every kid dreams of going to one of the Disney theme parks during their childhood years, but parents are usually a little more hesitant to book the trip because of the hefty price tag that accompanies it. If you are thinking about taking a trip to a Disney park and are looking to save money, check out the following ways to save hundreds, if not thousands, of dollars on your trip.  Keep in mind that Disney would like you to think that buying their packages is the best way to save money, but often you can save more by buying things separately.
Continue Reading


Former Disney star Vanessa Hudgens makes a dramatic departure from the role she is best known for as a high school cheerleader in her latest project Gimme Shelter.  In it, she stars, 16-year old Agnes “Apple” Bailey, a pregnant teen who leaves the home of her abusive mom on a trek to find her biological father.

Based on a true story, the movie follows Apple’s journey which  becomes one of survival. There are underlying themes about homelessness, shelters, teen angst, abortion and life that are dealt with in this movie but not in a heavy handed way, we hear.

Here’s an idea, why don’t you enter to win a pair of tickets and let us know what you think about the movie?
To enter, simply tweet about the film in social media the hashtag #GimmeShelter and +Bellyitch in GooglePlus, @Bellyitch  on Twitter or Pinterest.  Or enter below by leaving a comment sharing why you think being a mother is the toughest job in the world.

Each household is only eligible to win ONE (1) Pack of Two (2) AMC Movie Tickets via blog reviews and giveaways. Only one entrant per mailing address per giveaway. If you have won the same prize on another blog, you will not be eligible to win it again. Winner is subject to eligibility verification.

GOOD LUCK! OPEN TO US AND CANADA. CONTEST ENDS JANUARY 30
Watch the Trailer