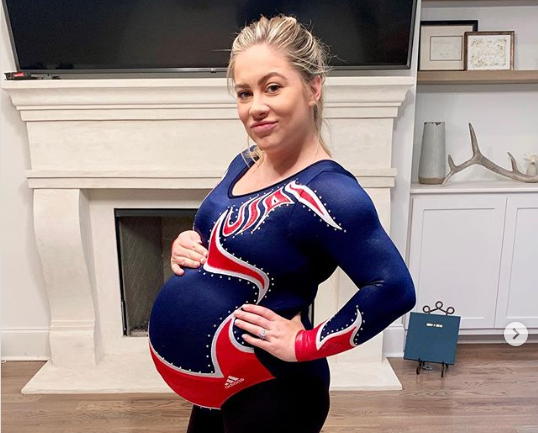 US Olympic Gymnast Shawn Johnson took up her husband Andrew East‘s dare to try on her competition leotard from her 2008 Olympics in Beijing, China  when she won 4 medals…but while currently  40 weeks pregnant.

“… fits a little different these days ? @andrewdeast dared me too hahah 40 weeks preggers,” she captioned the photo of herself in the royal blue long sleeve leotard. “But no joke… this babes is already more rewarding than any medal was,” she added. “BABY! GET HERE ALREADY!”

… fits a little different these days ? @andrewdeast dared me too hahah 40 weeks preggers. But no joke… this babes is already more rewarding than any medal was. BABY! GET HERE ALREADY! #pregnant #gymnastics

This was the latest in a very open and transparent pregnancy which started with the pregnancy announcement that also revealed they had suffered miscarriage and loss.

“Two years ago we got pregnant for the first time and ended up losing that pregnancy. Exactly two years later we are anxiously awaiting the arrival of our rainbow baby and we couldn’t be more excited,” she captioned her post featuring the video.

Two years ago we got pregnant for the first time and ended up losing that pregnancy. Exactly two years later we are anxiously awaiting the arrival of our rainbow baby and we couldn't be more excited. Praying for a safe delivery and arrival of Baby East. We can't wait to meet you! @andrewdeast @theeastbaby

They also have shared that the baby was due on October 23rd! Any day now! Safe labor and delivery vibes to the family!

We’re smack dab in the middle of Olympics coverage. Besides watching the various events and games, moms (and dads) can get their children into the spirit by making and eating foods from different nations.

And why not start with the host nation. Brazilian food is varied and colorful and yummy. It’s quite easy to find recipes that are kid-friendly as well.

Check out Mode.com’s curated recipes to get you started!

Check out Rio-Ready: Brazilian-Inspired Dishes for the Whole Family

by Eloquence & Company at Mode

Tonight is the opening ceremony for the 2016 Olympics in Rio de Janeiro, Brazil. As in past years, we can expect fans and the athletes to decorate their nails in support of their home country or the team they are supporting. For the 2012, Olympics Buzzfeed did a spotlight on all the fab nails that female swimmers wore during the games (like the ones in the header and below)

Also, CNN also did a tribute to the fan arts in this montage that included some of these nails:

Finally, for the 2014 World Cup, we did a round up of fun DIY nails for all the teams that qualified for those games as well, which coincidentally were also in Brazil. Hope these draw some inspiration if you are moved to go brave and paint your nails in honor of your fave team.