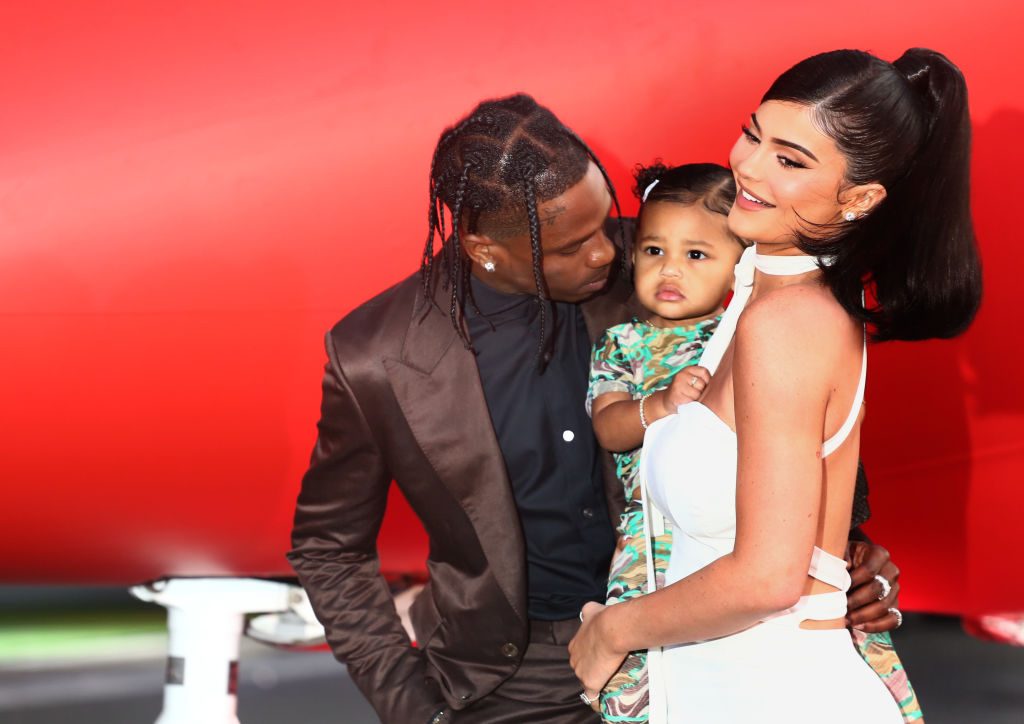 It is not uncommon for celebrities to file for trademarks associated with their children, but as what happened with Beyonce who has had trouble claiming Blue Ivy, Keeping Up With the Kardashians star Kylie Jenner is facing a similar hurdle trying to capture the copyright of her daughter, Stormi.

Page Six reports that a company called Business Moves Consulting successfully trademarked the words “Stormi Couture” about a month after the birth of Jenner’s first child with ex Travis Scott in 2018.

It recently filed a challenge to Jenner’s application for that same term asserting that the dual trademark would likely confuse its own customers. The company also claimed that it doubted that Jenner actually had plans to use the mark and comply with the United States Patent and Trademark office’s requirement that the mark  have a “bona fide intent” to be used “in commerce for identified goods or services.”

The same company was also on the other side of a celebrity child name dispute when DJ Khaled sued it in 2018, claiming that it was selling clothing using his son Asahd’s name.

A Mississippi Brand strategist named Curtis Bordenave is the face behind the company and has successfully trademarked the words Sirius, Z100 and the call letters for a bunch of other radio stations. He trademarked but eventually lost his initial application and claim to Cardi B, Asahd, and the words Radio Station, Call Letters, Mansplain and Alternative Facts.

According to a Clarion Ledger article about him, the married father of four travels to hair shows and teaches people how to manage their intellectual property.

“I think I’ve been waiting for this moment since the day I found out I was pregnant,” Kylie said of her newest beauty line. “An entire collection by @kyliecosmetics dedicated to my beautiful daughter,” the KUWTK star wrote online.

Kylie is attempting to trademark her daughter’s name along with “Stormi World,” which is the theme park that Kylie created and uses to celebrate her daughter’s birthdays. Stay tuned to see how the dispute between Kylie and Business Moves Consulting turns out.

Halle Berry is not pregnant.

In response to reports (including by this publication and others) suggesting that the almost 51-year old actress was expecting her third child, a rep for the star told Page Six on Monday that the rumor “is completely untrue. She is not pregnant.”

Dang! WTG to all of us for reading too much into that hand on the belly protective thing that most pregnant women do.

Also, over the years, in the age of social media, it has become commonplace for celebrities to skip the traditional publicist for relaying baby  news and to announce it by rubbing one’s belly during a red carpet event.

As we have blogged before, the hand on the bump has become a universal non-verbal way of announcing  a pregnancy.

About three years ago in her late 40s, the Oscar winner welcomed a son, Maceo, with then French husband Olivier Martinez. She has an 8-year old daughter Nahla with ex beau Canadian model Gabriel Aubry.

Ok. Our bad! Carry on.  Nothing to see here.

Um… did Adele just low key make a pregnancy announcement before millions of people on Monday during a tour stop?

Maybe. The singer-songwriter phenom told a concert crowd in Phoenix on November 21 as she ended the show amidst a shower of confetti, she shouted into the mic ” “I’m going to have another baby!”

Then she told them she’ll  see them in a few years. Oh?

We are not sure if she is already pregnant or plans to begin the process of conceiving after she wrapped the North American leg of her international tour which launched this past July 2016. She has 8 more international dates in Australia, according to a concert website.

Recall, in 2010, when she was preggers with her first child, now 4-year old son Angelo James, with partner Simon Konecki, she never revealed that she was expecting until she was well into her second trimester.

She stayed away from the spotlight for 4 years until returning to music in 2015. She has said that she would give up touring so she doesn’t miss a day of her son’s growing up and life. Rumors have it [pun intended] that she is considering a residency in Las Vegas which would permit her to tour but stay in one place.

Ex NFL player Ed Hartwell opened up recently about the reason he filed for divorce from his wife, child star Keisha Knight-Pulliam. During an exclusive with PageSix, he said that given their extremely short courtship of about a few months, he thought waiting longer to introduce a baby to the marriage was best.

“She wanted a baby really fast, and what I was trying to explain to her was that — from my beliefs, from seeing other successful people — that when you first get married, especially since we didn’t have a long courtship, that we should actually focus on each other and not just have a baby,” he said via Skype call with the gossip site.

“Couples who date for 3 years or more have better chances of staying together and a more stable marriage,” APlus summarized. “The findings mimic those of a 2006 study which found that couples who have dated less than 6 months before marriage had the highest divorce rate,”

Hartwell was also on point about spacing out babies. The average married couple in the United States wait three years into their marriage before having a baby.

Data from the U.S. Census Bureau and the Centers for Disease Control, state that American women are an average age of 26 when they get married and 29 when they have their first child — which varies from person to person. And this certainly doesn’t factor in older women.

At age 37, we can imagine, Knight-Pulliam didn’t want to take her chances on fertility as the older a woman gets the harder it is for her to have a baby without medical intervention and she was perhaps, anxious.

But Hartwell knows about the risk from his own personal history.  He was married before after a reported short courtship and he is now divorced from former Real Housewives of Atlanta star Lisa Wu.   Recently, Wu ripped into Knight-Pulliam for allegedly (according to Wu) commenting on Wu’s marriage to Hartwell on the show Hollywood Exes. She explained her concern was more for her 9-year old son with Hartwell.

“I’ve allowed people to assume as they wish and it’s been hurtful. But It’s no 1’s Biz & there is children involved. Not only her unborn child, but my 9 year old who can read very well,” she captioned a now deleted Instagram post.  Wu now stars on VH1’s Hollywood Divas.

Knight-Pulliam seems to have a large network of supporting family and friends, and may be okay. She was chilling pool side and showed a photo of her baby bump to her fans on Instagram lately. This could be captioned: #Unbothered

The joy of sitting by the pool and not having to suck your stomach in!!! ??? #MeAndMyLittleLady

Blake Lively and Ryan Reynolds welcomed their first child right before the New Year, Page Six reports.
Reportedly, she was not due for several weeks and the baby arrived early but reps for the couple report mom and baby are doing well.
This is the first child for the couple that married in 2012. Lively announced the news in a cute and chic way on her website Preserve in October.
Congrats!