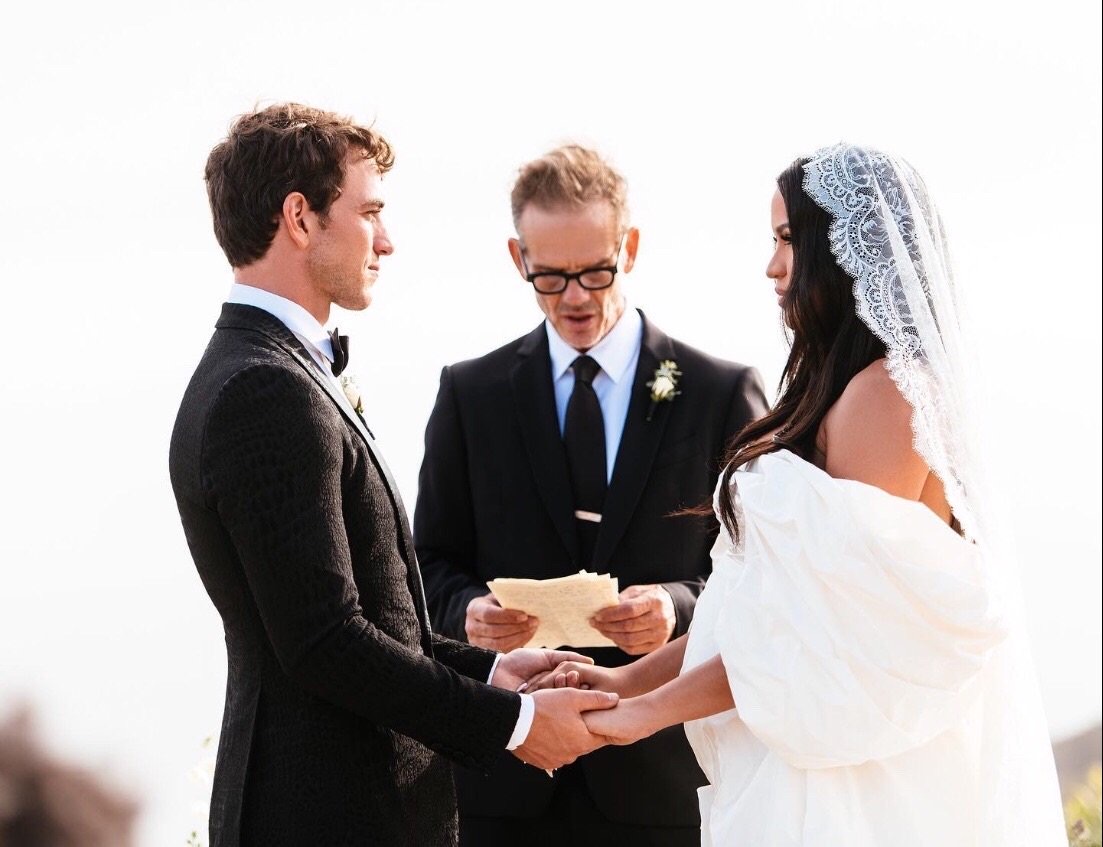 Singer and first-time mom-to-be Cassie Ventura is now Mrs. Alex Fine after exchanging vows with her longtime bullfighter  boyfriend  about one month after getting engaged.

Friday Night Lights actor Peter Berg posted a photo on his Instagram of the ceremony it appears he officiated.

The couple wed in an outdoor ceremony weeks before the dancer and model is scheduled to deliver her first child with her beau of  about a year . The couple got engaged late last month.

“My favorite day ever! #MrsFine ? 8.24. Thank you @comptoncowboys & @emiliosanchez,” she captioned the cowboy proposal which was done with the help of Compton Cowboys, a group that aims to defy stereotypes of African Americans, PEOPLE reported.

Cassie is also well known for dating musician, producer and biz mogul Sean “PDiddy” Combs for several years before breaking up a year ago and shortly thereafter dating Fine.

Before this big day the actress has posted very artsy nudish maternity pics on her account as well: 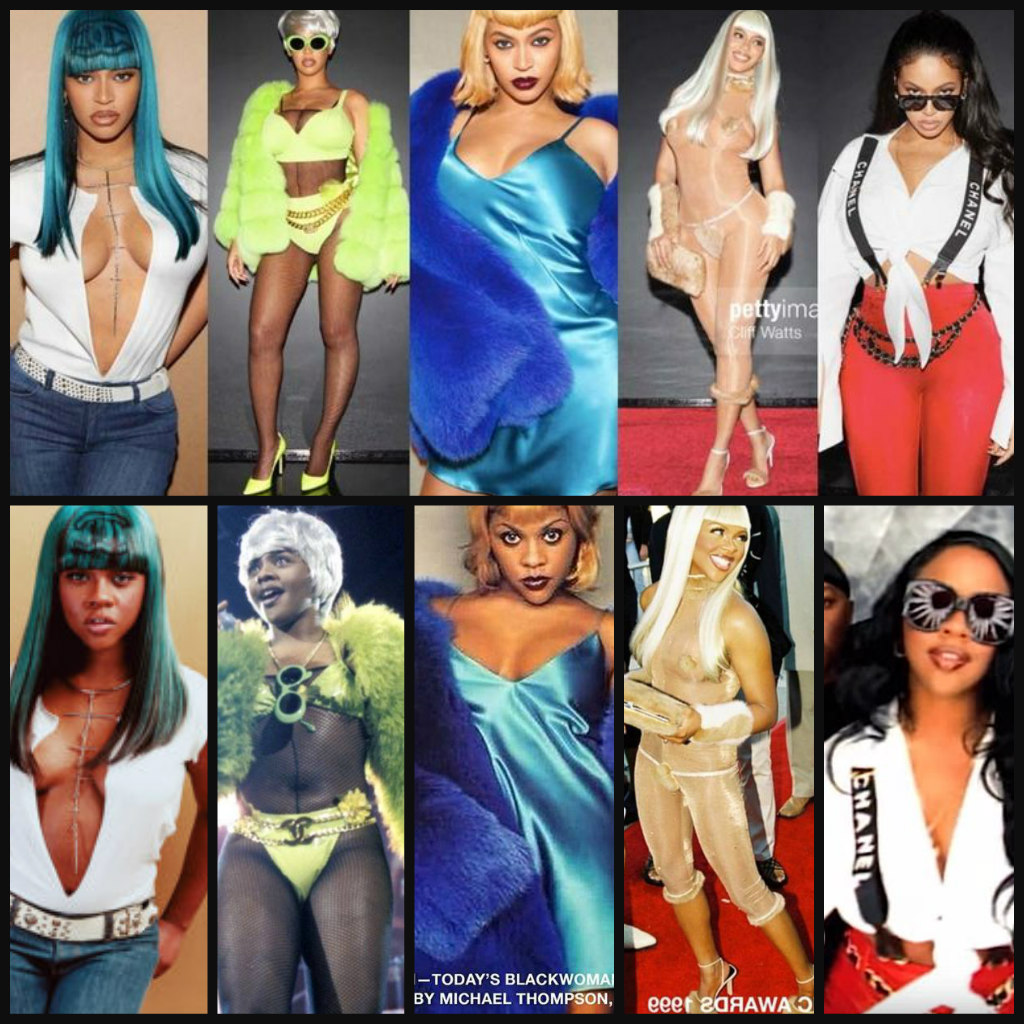 So Last July, biz mogul and rapper Sean “P Diddy” Combs sent the fans of Beyonce and Lil Kim into battle when he ended a tribute to Lil Kim on the Hip Hop Honors award show by stating, “Your hardcore raps, the way you walk, the way you talk — there’s only one Queen Bee. All hail the queen!”

That comment sent the Bey Hive fans into a tizzy as Diddy’s own Revolt TV conveniently blogged about after the event.

Perhaps to squelch all of the feuding between camps of fans of Queen Bey (also pronounced liked “bee”) with Beyhive members sparring with Lil Kim’s own Killer Bee Hive, the new mom-to-three set the record straight herself by posting her tribute to Lil Kim on her personal Tumblr website.

The first image in a series read “Hip Hop Would Not Be the Same Without Our Original Queen Bee”. It was part of the “Single Ladies” singer’s tribute titled “Halloween 2017: Lil’ Kim Appreciation.”

We followed both women during their respective pregnancies on this blog so we can definitely appreciate the sister love!!!

We had already featured earlier this week Beyonce pulling off Kim’s costume back when the pint-sized rapper was featured in Missy Elliot’s “The Rain” video.

And the original Queen Bee herself loved it, sharing them all on her personal Twitter page:

Come all the way thru Bey!! ?#beyonce#lilkim#queenbee#TookUsABreakpic.twitter.com/IXQCJUeORI

? Bey x ??? I’m still recovering from @Beyonce‘s slayage from Halloween and then this happens… #beyonce#tookusabreak#lilkimpic.twitter.com/ydTnAqF354 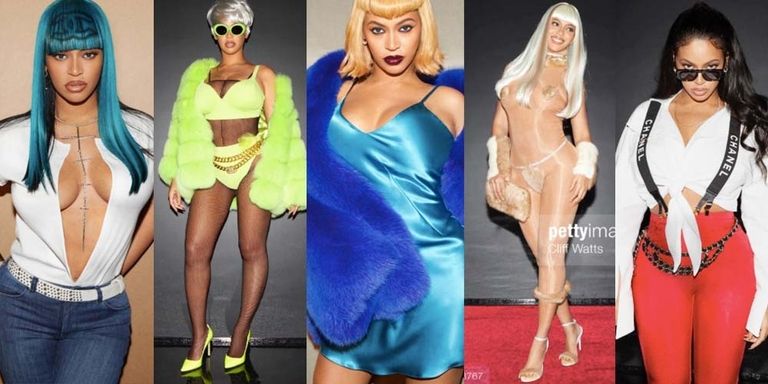 Here are the comparison looks in this video collage in Harper’s Bazaar feature:

From Left to Right:

d) From Lil Kim attending the The Source magazine’s Hip Hop Awards in 1999.

Here’s what Lil Kim had to say about the feature:

“I’m still recovering from @beyonce’s slayage from Halloween and then this happens… #beyonce #lilkim #queenbee #tookusabreak #beehive #lilkimseason,” Lil’ Kim shared on Instagram after the Grammy winner shared new photos of her costumes. “Lawwwwddddd, my wig is all the way in China!!! SLAYED. You did that B!”

She continued, “Come all the way thru Bey!! @beyonce the resemblance is crazy!! Match made in heaven. Every single detail is on point! I love you to pieces Bey.”

For the final share, Lil Kim shared her appreciation for Jay who dressed in Biggie Smalls a.k.a. The Notorious B.I.G.’s signature red jacket, jeans and Timberland boots from an already widely circulated photo taken at Kelly Rowland’s Halloween party this year.

“This is so adorable and it’s even cuter because Jay-Z and Biggie were friends and he has his mannerisms down pat,” she shared. “I love U Queen Bey and King Jay.”

Beyonce wasn’t the only one to do multiple Halloween costumes paying homage to one person. I actually went as Beyonce’s 2011 video for “Countdown” (WATCH IT HERE) when she was 6 months pregnant with her first child, Blue Ivy. This tribute is fitting given I have a pregnancy blog. I couldn’t decide on which of the two dozen or so outfit/looks she wore in that video so I settled on four. 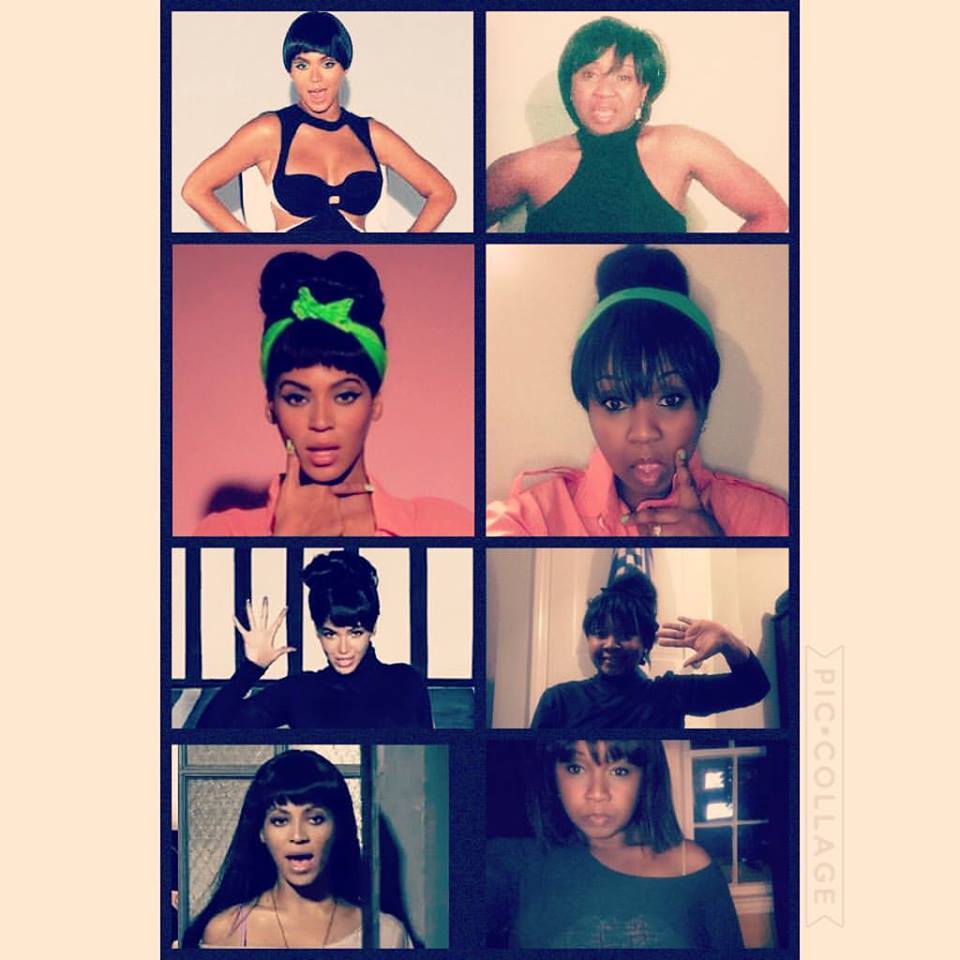 Unlike Bey, who probably wore her get ups to various Halloween parties and events, I simply rummaged my and my husband and kids’ closets and came up with outfits and used wigs I already own. I photographed myself via selfies or my iPhone’s timer app after the kids had come back from trick-or-treating and had settled in bed. I did do them all on Halloween so they count as Halloween costumes nonetheless! ha!

Halycon Kids, a quarterly magazine for preteen and teen readers which focuses on  fashion, art and DIY, has several celebrity kids models on the cover of its Fall 2016 issue. We love the pop of red featured boldly in the spread and the gold, silver and black Michael Kors kicks they are all wearing.

D’Lila, Jessie, and Chance Combs, whose parents are Sean ‘Diddy’ Combs and Kim Porter, are wearing a dress by Tago Look and shoes by Michael Kors.

Chance Combs, daughter of Sean ‘Diddy’ Combs and Sarah Chapman, is wearing a dress by Junona and shoes by Michael Kors.

Cali Dream, the daughter of rapper The Game is also featured in a cute dress with a tu-tu skirt and is the only one who looks her age, albeit she too is toting a pound of excess weave on her head.  Don’t get me wrong. I think they all look very cute, albeit very serious and very adult. Maybe a little too adult.

Harper Tillman, daughter of Kiki and Travares Tillman, a retired NFL player is also on the cover and is used to being made up because she is a professional child model who walks in many fashion shows. Tilman is often dressed up and made up like a little adult in many mag spreads. Maybe I’m an old folgie and I am paranoid over the existence of pedophiles who search the internet for kids images but something about how grown these children look in these photos make me uncomfortable.  I mean, Harper looks twice her age in most of her pics like these:

Disney channel actress Skai Jackson  is also featured in the magazine and by the looks of her Instagram page, it appears that she has become the latest fave for magazine editors and is getting lots of coverage, which is really cool. She started to get wide spread popularity beyond the kids’ TV scene when she took on rapper Iggy Azalea in a famous Twitter beef this past May.  Before that, she was featured often in a meme.

Since shutting Iggy down on Twitter, she’s the new teen “it” girl and has been featured on Paper magazine, Teen Vogue, Seventeen, YSB Now and of course, Halycon Kids and many others. She’s riding high and that’s a wonderful thing! But still…..

Sometimes it’s okay to get a little glammed up for a shoot ? #skaisthelimit

It was a Monday ? #skaisthelimit #comingsoon