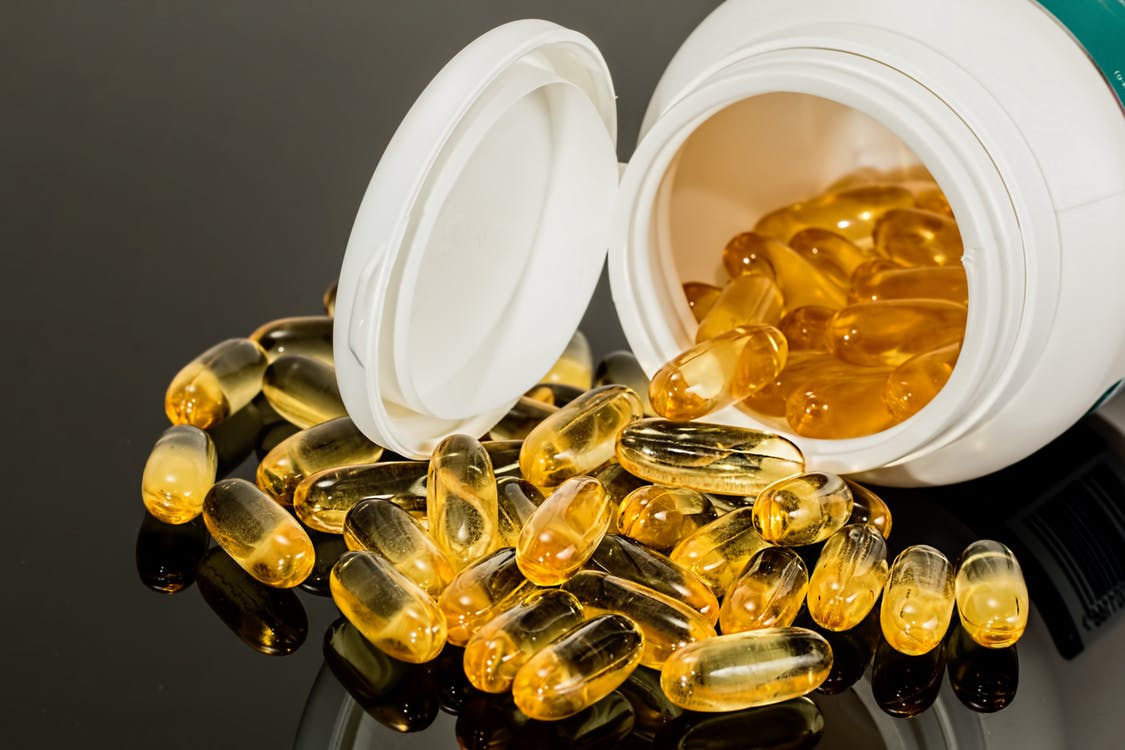 Probiotics and fish oil supplements during pregnancy and breast-feeding may reduce the risk for food allergies and eczema in early childhood, researchers report.

In a review of hundreds of studies, they found 19 randomized controlled trials with strong evidence showing that compared to no supplements, probiotics taken after the 36th week of pregnancy and the first months of lactation were associated with a 22 percent reduction in the risk for eczema in children.

They also analyzed six randomized trials with solid evidence that women who took omega-3 fatty acid supplements during pregnancy and lactation reduced the risk for childhood allergic reaction to eggs, the most common food allergy, by 31 percent.

Listen, who couldn’t use an extra $400 cash in their pocket right now?

If you are a mom, 12-24 weeks preggers or trying to conceive, even, you’re looking at earning 400 bucks for participating in a quick 2-week study from the comfort of your own home, for a total of 6 hours. Nice!  This is for you even if you have Cardio Vascular Disease, and especially if you are expecting.

A national market research agency called Focus Pointe Global is currently recruiting for participants to join an online community that discusses pregnancy, health and nutritional products. In addition to this community (which is filling up already), the agency uses the information from these online focus groups to help companies better understand their target market! Cool!

So, by participating in this opportunity, you are able to share your opinion and experiences to improve products while also making a little extra money. Sweet!

I signed up and wanted to share the love and give you guys the opportunity to join me! Come With?  But the window is closing soon to new participants so you will need to hop on this ASAP!

Good luck getting in!

Pregnant women with high blood-sugar levels – even if it is below the cutoff for diabetes – are more likely to have babies with congenital heart defects, says a new study.

“We already knew that women with diabetes were at significantly increased risk for having children with congenital heart disease,” said the study’s lead author James Priest, postdoctoral scholar in pediatric cardiology at Stanford University School of Medicine in California, US.

Parents, if you want your kids to get more exercise, you’d be wise to get out of their way.

In a new study, published in the American Journal of Preventive Medicine, researchers sought to observe how kids play in parks. Their overarching goal was to help park designers create public spaces that would better entice kids to run around and exercise. But along the way, the authors discovered something else: the single biggest barrier to children’s physical activity had less to do with park design itself and more to do with the hovering presence of a parent.

Children whose parents hung around monitoring them closely were only about half as likely to engage in high levels of physical activity as kids whose parents granted more freedom, the researchers found.

Women in the U.S. are having more babies — exactly 3,985,924 last year, according to the Centers for Disease Control and Prevention. Preliminary data show that birth rates in the U.S. were up by 1 percent last year from 2013. It’s the first increase in seven years.

But teenagers aren’t having as many babies. The birth rate in that group dropped by 9 percent in 2014 compared with 2013. For context, teen births have been on the decline since 1991.

The CDC’s National Center for Health Statistics published the data Wednesday. The findings are based on nearly all births in all 50 states and the District of Columbia.

Among the findings in the report:

One of the authors of the report, Brady Hamilton of the National Center for Health Statistics, says the increase in the number of births overall was somewhat of a surprise.

Two new studies were released this week that addressed those uber cautious new parents who go above and beyond to protect their babies from dirt, germs and potentially dangerous foods to the point they end up contributing to their children developing dangerous allergies.
One study found that parents who give their children peanut products early in life can prevent them from becoming allergic to peanuts. The trial was done on 600 babies worldwide with high risk of developing a peanut allergy. The study was published in the New England Journal of Medicine. Currently, about 400,000 US children have peanut allergies, CNN  reports.
A separate Swedish study published in the journal Pediatrics found that children who lived in homes where the dishes were washed by hand were less likely to develop allergic asthma or eczema compared to children living in homes with a machine dishwasher. Researchers surveyed over 1,000 families with children between the ages of 7 and 8,
Here too there is a suggestion that exposure to an array of microbes in early life helps a child develop a healthy immune system.
Both developments speak to the importance of not going overboard to shield babies and children from germs because parents may be doing them more harm than good.

It used to be that once a woman became pregnant, her husband’s job was basically done. Besides helping her through the pregnancy, as any proper man would, he remained the same physically, emotionally, and biologically. Now, we know things are a little different. Some research has shown men’s hormone levels change with the birth of a baby, but according to a new study from the University of Michigan, these changes may occur before the baby’s even born.
“Our findings suggest these changes may begin… during the transition to fatherhood,” said study author Dr. Robin Edelstein, from the university’s Department of Psychology, in a press release. The study was published in the American Journal of Human Biology.
Edelstein and her team conducted four tests on the saliva of 29 couples expecting their first babies. The tests took place throughout the pregnancy period, at 12, 20, 28, and 36 weeks. The team was specifically looking at levels of testosterone, cortisol (the stress hormone), estradiol (a form of estrogen), and progesterone (another female hormone). They found that as pregnancy progressed, all four hormone levels increased in women, however, in men, both cortisol and progesterone levels remained the same while estradiol and testosterone levels decreased.
“We don’t know yet exactly why men’s hormones are changing,” Edelstein said. “These changes could be a function of physiological changes that men experience as they prepare to become fathers, changes in their romantic relationships, or even physical changes that men experience along with their pregnant partners.”

A new survey suggests that kids who are obese at 11-years old stay that way through age 16 and after.
Researchers  tracked close to 4,000 children in three US metro areas for 5 years and discovered that 83% of obese 10th graders were also obese in the 5th grade.  A mere 12% were able to “thin out” and “lose their baby weight” as the old wives tail goes, and transitioned to normal weight.
“Parents sometimes think that it’s just baby fat and their kids will outgrow it, but we found a lot more constancy [of extra weight over time] than we anticipated,” study author Dr. Mark Schuster, chief of general pediatrics at Boston Children’s Hospital said of the findings published in the November 10th edition of journal Pediatrics.
“Certainly, once you’ve gained weight and become obese or overweight, it’s harder to change the habits influencing that,” he added. “But just because kids are gaining weight as they get older doesn’t mean they can’t lose weight — they definitely can.”
The research also suggest that kids of parents who are also overweight or from families with less education are also less likely to lose weight and become normal weight over time.
It also implied that living around, going to school with and being in communities with a good number of substantially overweight people contributes to a social normalization of obesity.
Compared to kids from 40 years ago who didn’t see that many overweight peers and adults, today’s children do and are not so ostracized if they are packing a few extra pounds.
Also, a more sedentary and super-convenient society fed on a steady diet of high-fat, heavy carb processed foods contribute.
“People are less likely to walk places or go to a park,” Schuster said. “There’s also a lot of fast, convenient, high-processed food available that’s higher in calories and less nutritious. A lot of what we’re trying to encourage is to eat a healthier diet and engage in more physical activity — and that’s true whether a child is obese or not.”
Finally, the data also showed that children who were heavy in the 5th grade who spent more time with screens, TV and video games, were less likely to lose the weight than kids who had limited screen time.
The solution seems to be for parents to actively encourage their teens to get involved in organized sports, go out more and regularly and watch their diets so that they do not overindulge in bad foods.
h/t  WebMD

A new study found that school-provided lunches are more nutritious than those brought from home.
Comparing over 750 school meals with more than 560 packed lunches given to pre-kindergarten and kindergarten students in 3 schools over the course of 5 days,  Virginia Tech researchers found that the home lunches were less healthy, specifically:
“There was a spectrum,” Alisha Farris, a Ph.D candidate at Virginia Tech and lead researcher said. “There were some really healthy packed lunches. But overall, they were pretty unhealthy.”
The study is published in the November-December issue of the Journal of Nutrition Education and Behavior.
Of the 50 million children in US public schools, close to 60% of students eat school lunch while about 40% bring their lunch.
Well…I guess First Lady Michelle Obama could gloat about this one given her platform during her husband’s two terms has been mainly promoting healthier school lunches and she has pushed to make them even more healthier.
photo: Getty