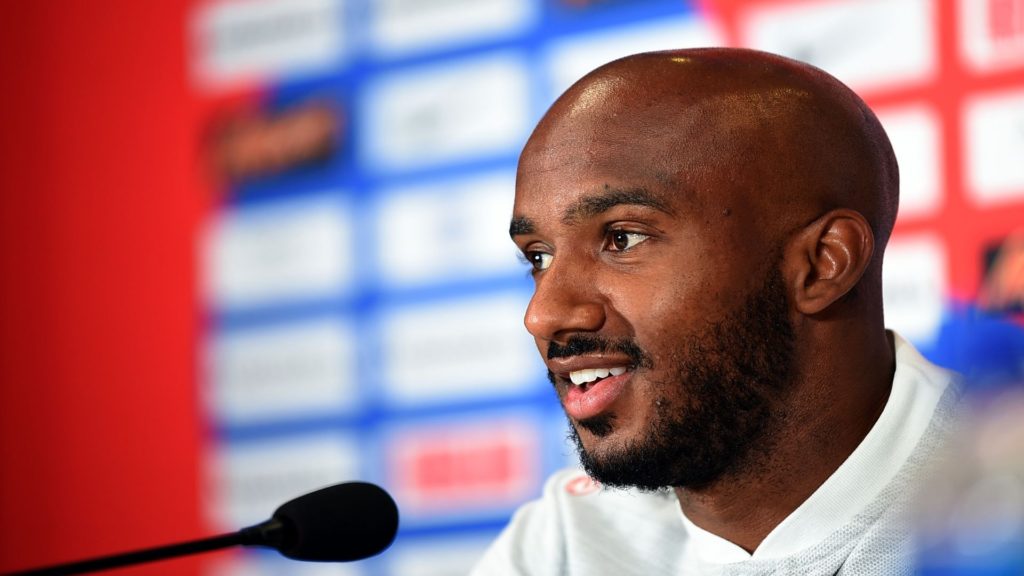 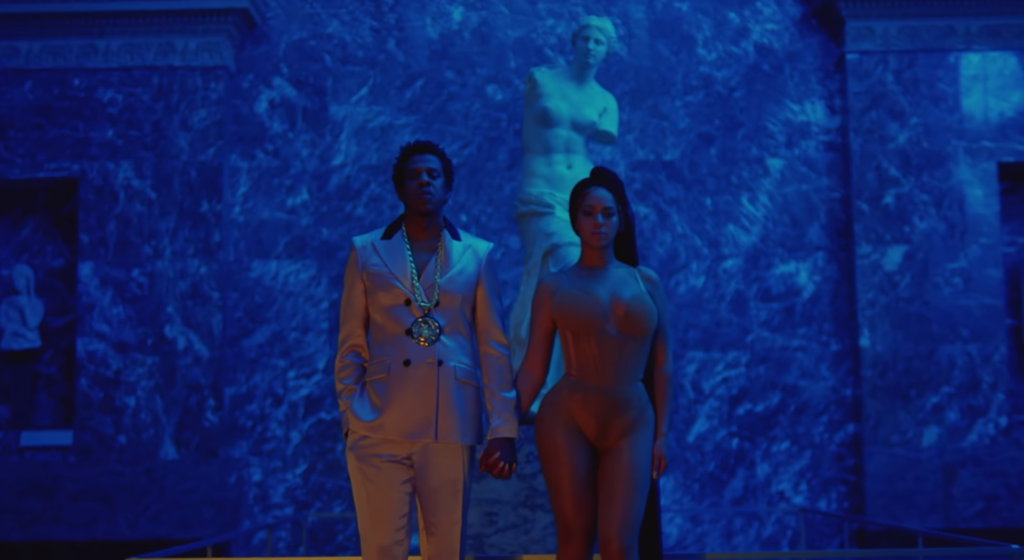 I was going to blog about something totally different this afternoon, but you know how Beyonce releasing an album has a habit of throwing all of my plans in disarray. [See review of Beyonce projects here] and [here] She and her husband Shawn”Jay Z” Carter released a 9-track album called “Everything Is Love” smack dab in the middle of their On the Run II tour. [This is right after the Beychella performance which was right after Jay’s album “4:44” which was right after Bey’s “Lemonade”]

These two don’t want us to keep our coins in our own pockets this summer. Anyway, I digress…

Dee Locket of Vulture did an excellent job summing it up for me so I’ll syndicate her opening paragraph to an excellent review you can read in its entirety HERE:

Your weekend plans: Canceled. Yeezy season: Dismissed. Drake: Who? Beyoncé and Jay-Z have pulled a Beyoncé and Jay-Z and surprise-dropped yet another album — but this time, as a couple. Their first-ever joint album Everything Is Love — the one that’s been percolating since even before Lemonade and 4:44 — was released on Saturday evening at the end of the duo’s London show on their On the Run Tour II with one casual parting announcement: “Album Out Now.” Out! Now! The nine-song album, complete with one visual component and a bonus track, is streaming in full on Tidal as we speak. With their trilogy recounting marital strife to remarried bliss now complete, what do we make of this closing chapter? From the shots at Trump, the NFL, Spotify, the Grammys, and Kanye West, to the Blue Ivy cameo, to filming a music video in the Louvre, here’s everything you need to know about the conversation the Carters have caused now.

Phew! What an intro. Well, today is Father’s Day and before heading out to celebrate, while the men are busy watching World Cup games, I hopped on to pen a few thoughts. 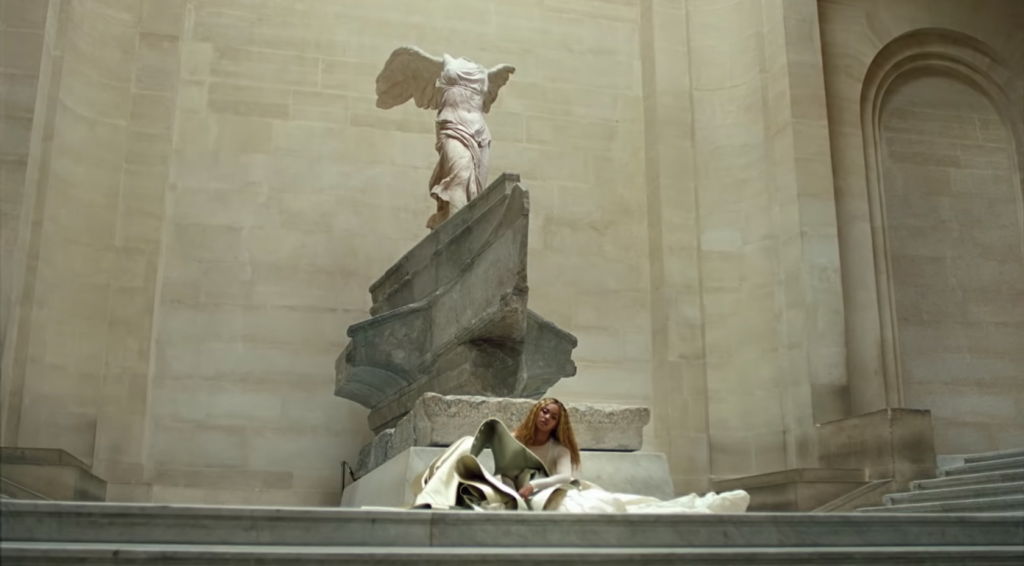 First, I don’t have Tidal, where the album exists exclusively. Yes, they are still trying to make it happen, and even have gone as far as declare war on Spotify. No really, they mention the streaming competitor in one of the songs.  My subscription expired so my options are to re-up it to listen to the complete set or wait until it slowly releases on other platforms. le sigh. 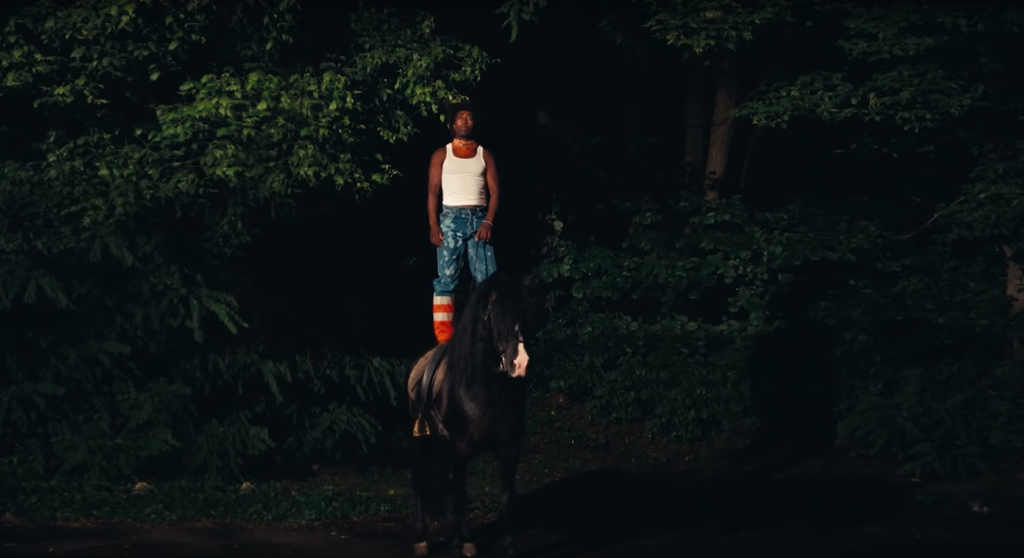 I hear it’s getting mixed, but mainly good reviews. Because I have nothing to add substantively, I’ll share that I loved the only released-to-the-public video out: “Apeshit”.  Imagine! They rented out The Louvre in Paris, France for the video shoot! Wow!

The video for the song is a cinematic and visual treat. I love art. All art. Musical, visual, performing but especially art of yesteryear and religious art so it was a bonus to get to see flashes of famous pieces in the video. 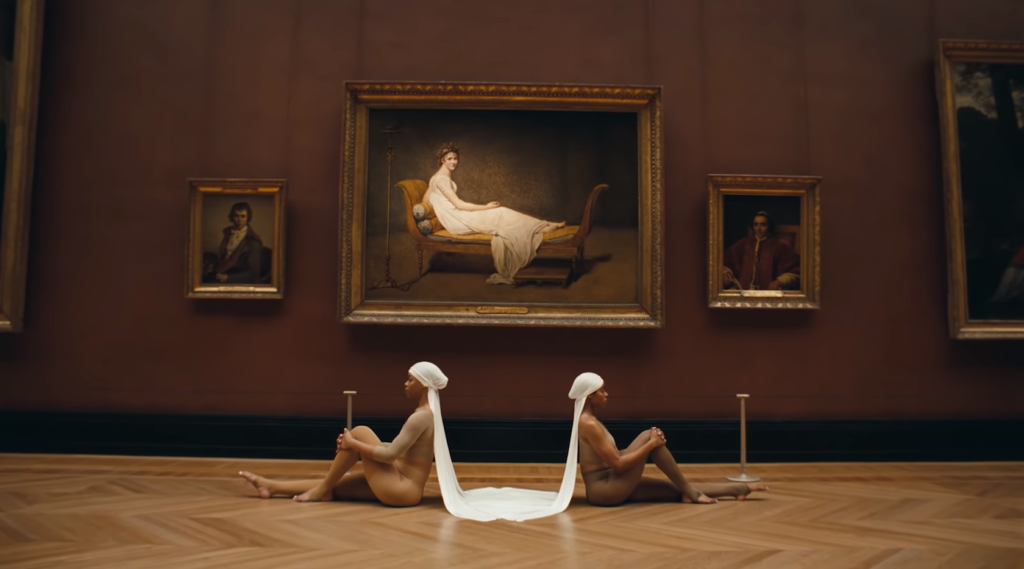 And it is also a bit political. In the middle, there is an overt swipe at the anti-Take A Knee movement. 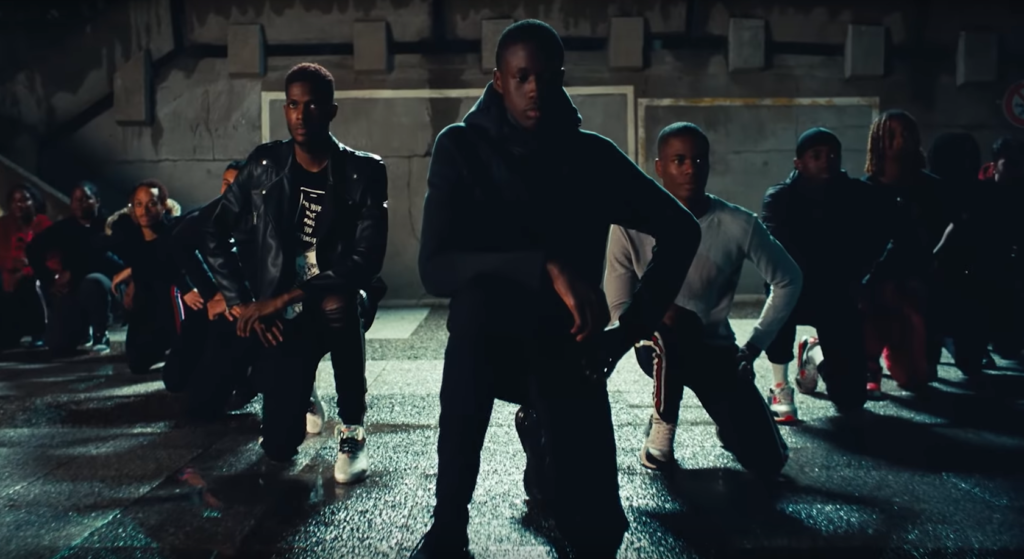 There is a lot to digest and there have already been publised a bevy or reviews. One thing I can offer that may not have been shared by others about “Apesh*t”  is some of  the similarities to other visual stimuli in other pieces.

Screeeeech!! Hold up, before I go there, I was also taken by the fact the song is Trap and besides both dropping some serious bars and Jay Z delivering an exceptionally good performance, he later gets side-graded (*is that a word?*) in my opinion to be to the sound effects emoting guy to Beyonce’s shine when it’s her turn to spit verses.

You know, like the guy Takeoff in the group Migos? ha!

Anyway, back to the visual similarities I spotted…

First, her sister Solange is famous for her love of dance and art combined. Her wedding reception took place at the New Orleans Museum of Art, and earlier this year, she unveiled a performance piece at the Hammer Museum in Los Angeles, and performed her title song to her first Grammy-winning album “Cranes In the Sky” at the Guggenheim in New York City.

And so her big sister went bigger. 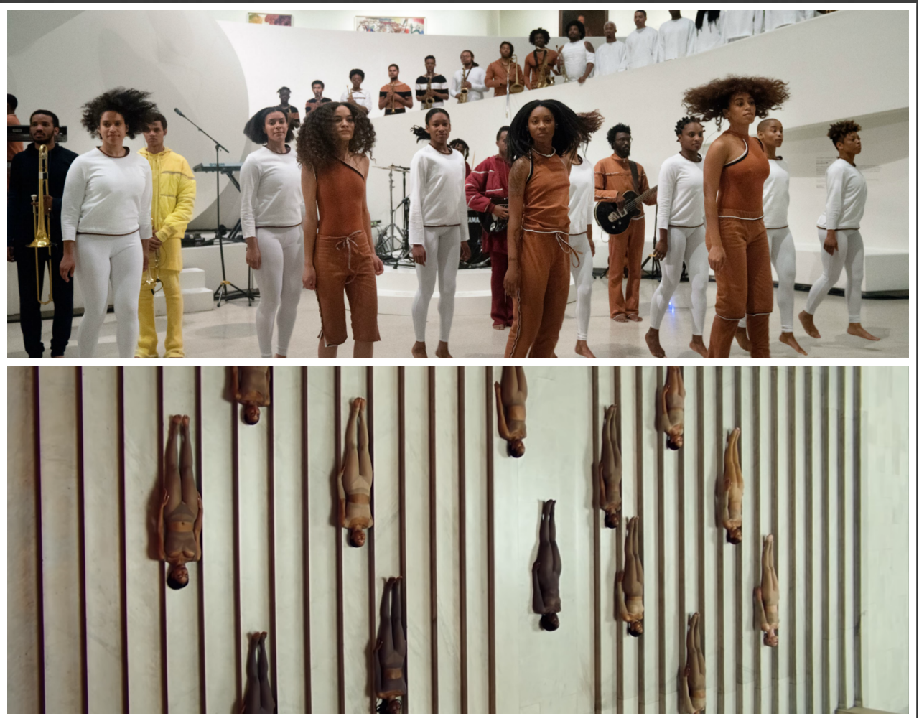 The second similarity. The dancers in all brown reminded me of the all Brown clothing the dancers in Remy Ma (featuring Chris Brown) video “Melanin Magic.”

And finally, the album cover is of a woman braiding a man’s hair. It was reminiscent of Rihanna shaving dancer Mette Towley‘s  hair in the intro to N.E.R.D.’s song Lemon. 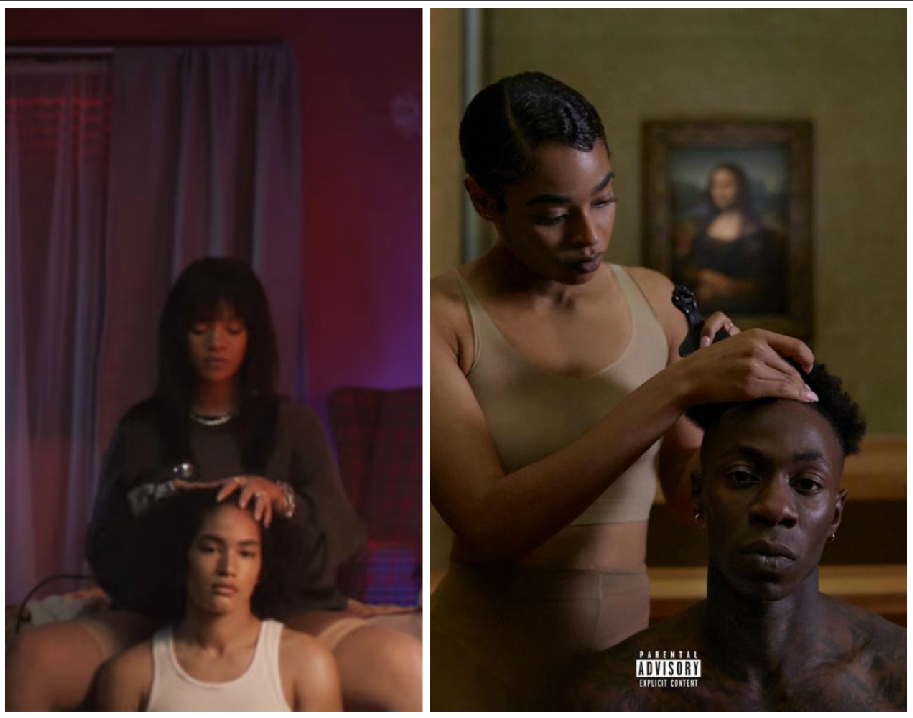 Art begets Art. There is nothing truly original anymore and everyone’s interpret, pay homage to and weave in aspects of previously done works.

What else did I spot?

I love that there is a shot in the video that is an ode to us Virgos! Beyonce is one too. I got this long lingering shot… 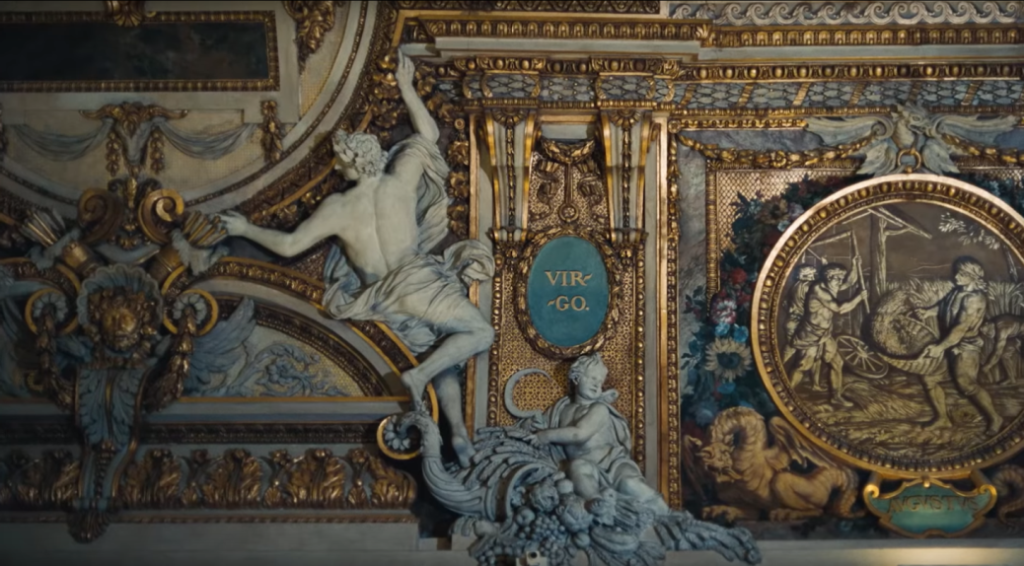 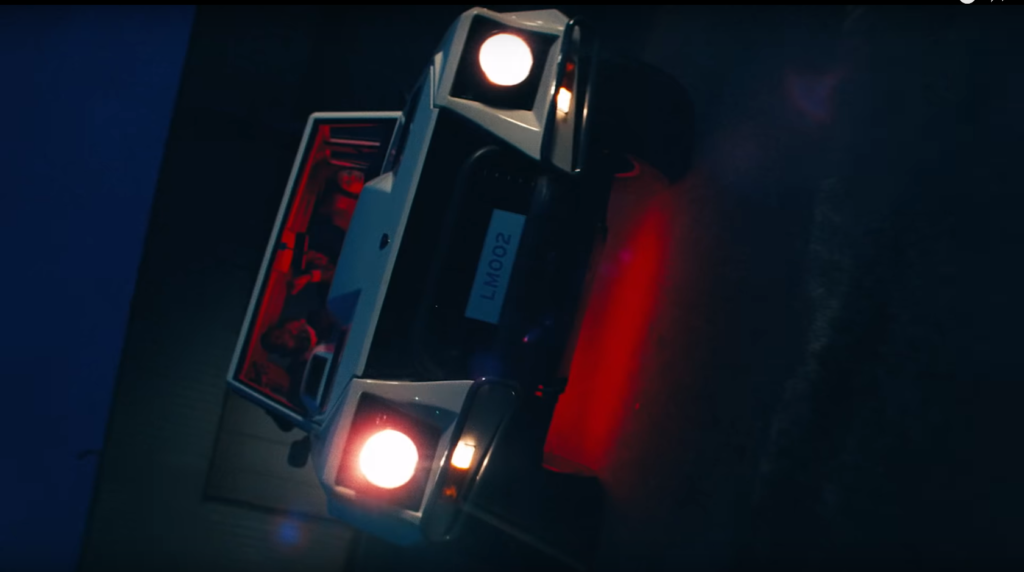 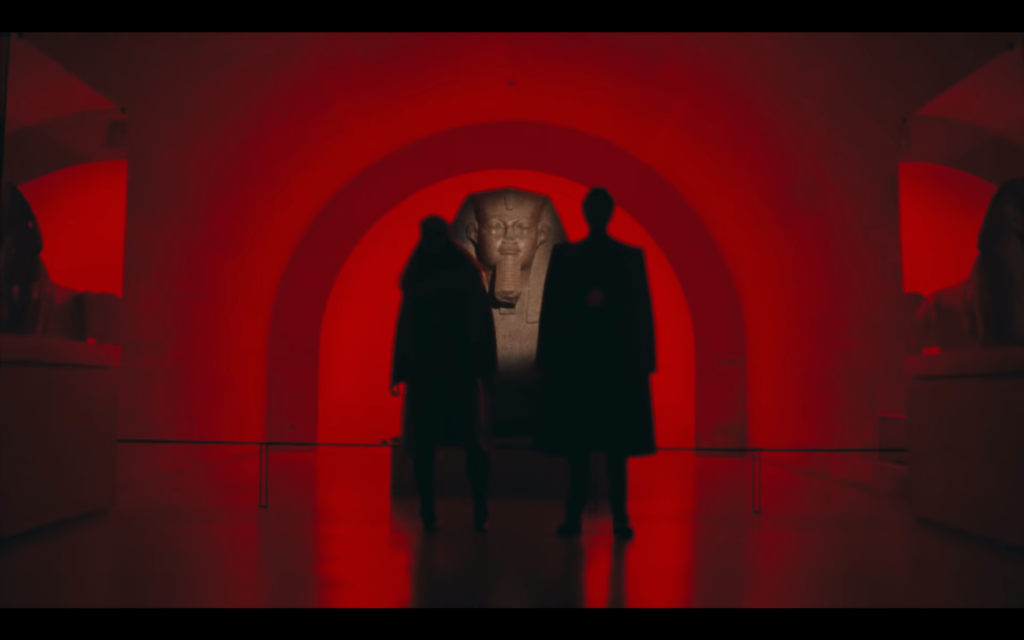 Tonight, we congratulate the “Ultimate Soccer Mom” Christie Rampone  on winning and becoming the 2015 Women’s World Cup Champion along with members of Team USA. We also salute the 16 year team vet on her final World Cup appearance.

Rampone, who recently turned 40-years old, is the last remaining Team USA member from the 1999 team which was the last US team to win the World Cup.  She just wrapped her 5th World Cup appearance.

Rampone is also a three-time gold medalist, having won championship titles at the 2004 Athens Olympics, 2008 Beijing Olympics and 2012 London Olympics. She has finished no lower than third place in each of the World Cup or Olympic tournaments in which she has competed.

Although Rampone didn’t get a chance to play as much this tournament, she still represented moms well as she is one of a few mothers on the team. When she played against Nigeria earlier in the tournament, Rampone became the oldest woman to ever play in a World Cup.

Now, the married mom of two plans to retire and turn her focus solely on her daughters 9-year-old Riley and 5-year-old Reece and whatever sport they will pursue.

“They’ve spent a lot of their lives watching mom and traveling with mom because of what mom loves to do, so I want to be there to support them,” Rampone told ABC news “So when, you know, they start playing their games , like I want to be there for that.”

Nice. She was profiled last month by ABC News in this quick segment during Good Morning America.

Yesterday, if you were watching and rooting for the United States as the team played Belgium in the semi-finals of the FIFA World Cup, you may be heartbroken to learn they lost. However, if you were watching the match, you might have seen the amazing 16 saves that goalie Tim Howard made all match. His 28 total saved for the entire tournament is the most for any goalie for all teams this year.
It’s a great feat for extra reasons.
Howard, a fixture on the US Men’s National Team (USMNT) since 2007 had to overcome a life living with Tourettes Sydrome and Obsessive Compulsive Disorder (OCD).
Fortunately for Howard, he didn’t have to deal with bullying too much because he was a big kid and he played sports. His athleticism made him popular and because of that, he wasn’t ostracized or treated as an outcast as much despite being different.  Howard said he dealt with the condition by internalizing it.
“If I was having a tough spot, one day, one week…I just went into my own shell, kept more to myself,” Howard said in the April/May issue of Neurology Now. “From the age of 9 to 15, it was just this chaos of different tics, and they were pretty strong. I would just begin to figure out how a tic worked with my body, and, bam, six months or a year later, a new tic would come…On the field I wasn’t Tim who had TS or Tim who had tics. I was Tim who scored goals or scored baskets or hit home runs.”
For Howard’s athletic prowess and being a role model by speaking out and in support and awareness of TS and showing by virtue of being a star this World Cup, he is a hero and role model.
For his leadership in sports today and way before most Americans started to really pay attention to this awesome athlete today, I’ve nominated him to be added to the celebrity division of a new Warner Brothers Consumer and DC Entertainment program Superman Hall of Heroes which empowers consumers to honor their personal heroes or those who have made a positive impact on their lives of the lives of others.
Surely, there are others who are not in the spotlight doing amazing things and not seeking recognition.
You can induct your very own personal or local hero.
Visitors to the site can select a package level starting at $24.95 which can include things like an inductee certificate or commemorative T-shirts, coffee and sports tumblers, baseball caps or golf towels  with the Superman logo on it.
It’s a cool idea and a perfect gift for a dad who has everything or to that selfless man in your life or community doing the darn thing and not expecting anything in return.