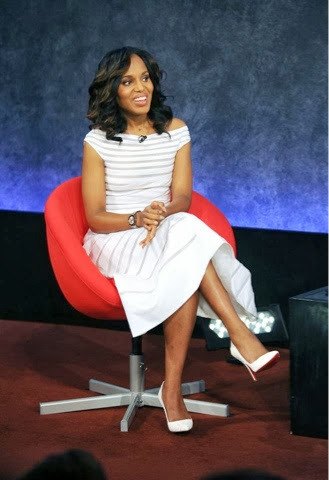 Emmy-nominated mom-to-be Kerry Washington opened up to Pat Mitchell, President and CEO of The Paley Center for Media about first meeting Scandal creator Shonda Rhimes, her life and work, during a recent episode of the Center’s interview series.

During the 30+ minute exchange before a live theater audience, the Scandal star also shared some insight into her humble upbringing. She acknowledged that growing up in an urban city,  she purposefully avoided wearing skirts and dressing girly because of a fear of street harassment.
She added that unlike now when there are plenty role models of women who are smart & beautiful, she grew up without having such figures. You could either be smart or pretty. She didn’t think you could be both. Today, Washington is an advocate for girls and sits on the board of several civic organizations & is a member of the President’s Committee on the Arts & Humanities.
The Golden Globe nominee also reflected on how her mom tried to sway her from aspiring to be an actress.
The fashion icon said being fashionable isn’t accidental.
When Washington started taking acting seriously, the former “wallflower” said like a true “daughter of a professor” she studied fashion & all the designers & labels.
Washington, who is expecting a child with her husband NFL player Nnamdi Asomugha ended the interview session by reciting an empowering monologue  “My Short Skirt” from The Vagina Monologues which spoke to the street harassers of her past & society’s message to girls.
WATCH the insightful and informative video HERE!
http://www.thirteen.org/programs/at-the-paley-center/#kerry-washington
By Jeneba Jalloh Ghatt
Vanessa Hudgens as pregnant teen in “Gimme Shelter” Opens Today – WIN a Pair of Movie Tickets! (TRAILER)
Valentine’s Day Gift Ideas for the Expectant Mom