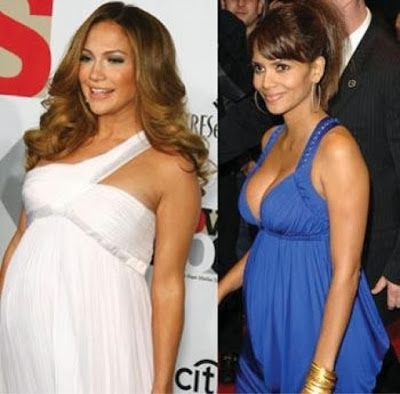 Don’t let all these celebrities having babies in their 40s fool you into thinking you’ll be able to easily get pregnant.
That is the message author Tanya Selvaratham relays in her new book “The Big Lie: Motherhood, Feminism and the Reality of the Biological Clock”
In a recent CNN review of her book, Selvaratham says older celeb moms like Halle Berry, Tina Fey, Nia Long, Julianne Moore, Kelly Preston,  Uma Thurman  and others have average women thinking having babies in their mid to late 40s may be easy.
“We see celebrities having kids seemingly without any problems and we have no idea what they went through,” Selvaratham says. “We see the end result, but not the struggle.”
Forty may be the new 30, but our ovaries have not gotten the same makeover, CNN notes. Even with all the advances in reproductive technology, our eggs have a finite shelf life and the odds of having a child over 40 years old are shockingly slim.
Yet, because of women delaying the start of their families and other reasons, there are more childless women in the US than in year’s past. In 1976, one in 10 woman between ages 40 and 44 was childless. By 2006, that numbered doubled to one in 5, according to the U.S. Census.
The book may also have been driven by the author’s own fertility struggles which took a toll on her marriage.
It seems Selvaratham’s doctor may be part to blame for her troubles. After suffering her first miscarriage at 37, Selvaratham’s doc told her she still had time to conceive, influencing her decision to delay trying again until later. She learned later the delay in time probably made it harder.
According to the Southern California Center for Reproductive Medicine, a woman in her 20s has a 20-25% chance of conceiving naturally per menstrual cycle. In her early 30s, the chance of pregnancy is 15% per cycle. After 35, the odds of pregnancy without medical intervention are at 10%. After 40, that number falls to 5%, and women over 45 have a 1% chance of conception.
Interesting. Your thoughts?
By Jeneba Jalloh Ghatt
Feminism and the Reality of the Biological Clockpregnancy adviceTanya SelvarathamThe Big Lie: Motherhood
Bump Watch: Drew Barrymore bumpin’ it upon Instagram
Surrogate pregnancy ban in Kansas proposed