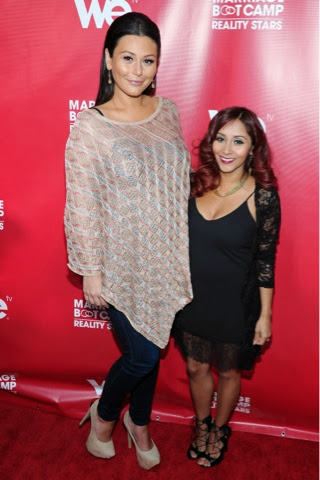 It was a double Bump Watch this weekend at the premiere of WE TV‘s  Marriage Boot Camp.

Eight months preggers cast member of the show Jenni “JWoww” Farley was joined on the red carpet by her 6-month pregnant bestie Nicole “Snooki” Polizzi.
Both ladies are expecting a girl. Farley with fiancé Roger Matthews who stars alongside each other in the on air couples therapy  show, expect their first child for both to arrive in July.
Polizzi and her fiancé Jionni LaValle, both former Jersey Shore stars, are parents to almost 2-year old Lorenzo. They’re expecting to welcome their daughter in September.
By Jeneba Jalloh Ghatt
Trend: How to wear Summer Whites-Maternity style
Two must-see Viral Babies Videos – WATCH