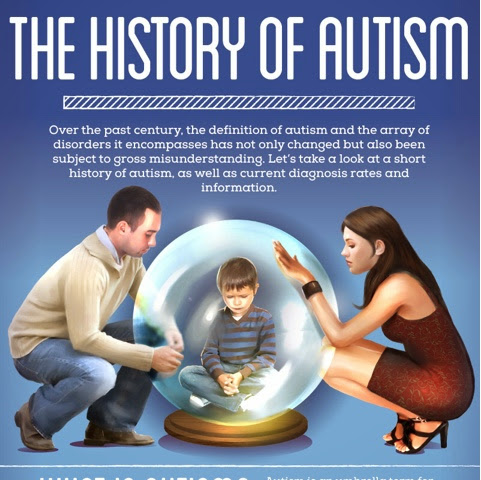 Given that Autism is such a hot topic of late, I am sharing the stats and information from an infographic we shared last year that gave a historic overview of the condition

The History of Autism

Over the past century, the definition of autism and the array of disorders it encompasses has not only changed but also been subject to gross misunderstanding. Let’s take a look at a short history of autism, as well as current diagnosis rates and information.

Autism is an umbrella term for autism spectrum disorder, which is characterized by:
It’s called a spectrum because of the wide range of symptoms and impairment levels children can have. Some are only mildly affected by their symptoms, while other children are severely disabled.
The Greek root of the word “autism” is “autos,” meaning “self.” Individuals with autism are generally withdrawn from social and emotional interaction, giving rise to the term.

1911
Swiss psychiatrist Eugen Bleuler first uses the term in reference to certain symptoms of schizophrenia.
1920s
Stemming from the belief that autism symptoms are caused by diet (including those high in gluten), biochemical treatments are used, and diet supplements and restrictions are put in place for children with autism.
1930s
Electroconvulsive therapy is first used to try to correct antisocial and self-destructive behavior. Though controversial, this type of treatment is still used in rare cases today.
1940s
“Autism” is first used to describe children who experience emotional or social issues.
1943
A definition for autism is put in place by child psychiatrist Leo Kanner. He describes autism as “lack of affective contact, fascination with objects, desire for sameness and non-communicative language before 30 months of age.”
1944
German scientist Hans Asperger detects a condition with similar afflictions that is now called “Asperger’s syndrome.” There is still believed to be a link between autism and schizophrenia.
1950s
Autism is falsely suspected of being caused by cold and uncaring mothers. Parentectomy, or the removal of the afflicted child from his or her parents for long periods of time, is utilized for treatment by a doctor in a study.
1960s
Various treatments are tested, but there is still a limited understanding of what helps patients. Pain and punishment are still inflicted on children to try to correct antisocial behavior. The use of LSD is implemented. As a serotonin inhibitor, it is believed that altering the patient’s state of perception will help alleviate symptoms.
1965
Bernard Rimland, an American psychologist, establishes the Autism Society of America, one of the first autism advocacy groups.
1980s
Early forms of behavioral therapy are used primarily in the treatment of children with autism, and autism is finally categorized separately from schizophrenia. Neurosensory therapy is introduced, as researchers and doctors begin to believe that sensitivity to auditory stimulation is responsible for some antisocial behavior.
1990s
Holding therapy, in which a child is restrained and forced to perform various social reactions like maintaining eye contact, is used.
Today
The term “autism spectrum disorder” is used, and specific tools for diagnosing the severity of a child’s case are developed. Applied behavioral therapy and psycho-dynamic therapies are typically used to treat children with autism.

Due to a more thorough understanding of the disorder and effective treatments for its symptoms, more children are getting the help they need to live more social, emotionally fulfilling lives. We now understand a lot more about the disorder and who it affects.
1 in 68
Estimated number of children affected by an autism spectrum disorder. For boys, the number is 1 in 42
.
2%-18%
Likelihood that a person will have a second child with autism if they already have one
1 in 10
Number of children with autism who also have Down syndrome or another chromosomal disorder
2 years
Age at which a diagnosis of autism is typically reliable. Most children are not diagnosed until they are 4 years old.
Unfortunately, along with a more thorough understanding of autism has come a boom of diagnoses and fear regarding the cause of the disorder.
120%
Increase in autism spectrum disorder prevalence between 2002 and 2010.
And thus we have all the varying speculation including the ones linking vaccines to the increase. Not only as it been linked to vaccinations, as a now-debunked once-heavily relied upon study stated, but also most recently to things like C-section births.
We still do NOT know.

By Jeneba Jalloh Ghatt
history of autismparenting adviceparenting tips
Report: GAP offers Jessica Simpson’s kids a modeling contract
What Celebrity moms are up to on Instagram