The mom to be wore a nude beaded and jeweled dress by Angel Brinks and arrived to the even in a party bus with her 3-year old son King Cairo with ex-fiance, Tyga.

The intimate affair was attended by 80 guests including Rob’s friend Scott Disick (ex-boyfriend to his sister Kourtney Kardashian and dad to his nephew and nieces), E! News reported. Rob’s sisters Kourtney, Kylie, Kendall and Kim were at Paris Fashion Week.

“Rob has been involved in the planning. He really wants Chyna to be happy and he has been helping with the small details so that everything is to her liking,” an insider told E! prior to the bash. “He really wants it to be a special day for her.”

Guests brought several designer and upscale gifts. (see video below). Looks like it was a success and E! News sources said the couple were very affectionate towards one another and Rob seemed very pleased to becoming a dad.

“It was such a fun party. Rob and Chyna had the best time. Rob and Scott arrived together right at the beginning and Rob was the last to leave,” a source shared with E! News. “He was so happy, very very excited about being a dad. Scott kept teasing him and saying “Bob, you are about to be a dad!”

Recall, last week, Rob had a mini melt down and tweeted out his half-sister Kylie’s number out  when he mistakenly thought his sisters were planning a shower without inviting Chyna but he told On Air with Ryan Secrest.

“It was miscommunication,” Rob told Secrest on his daily radio show. “They were trying to all surprise me and do a little shower … I took it the wrong way because it was a surprise, so I thought they weren’t going to have Chyna there.”

At least Rob manned up to the very juvenile mistake.

“It was literally miscommunication and I probably shouldn’t have went on Twitter, but I did,” he admitted. “We all love each other and we’re all family and I never want to beef or argue with anybody.”

Chyna and Rob got engaged in April after three months of dating and announced they’re expecting the next month.

Check out the photos that various guests and vendors shared on Instagram, including photos of a maternity shoot they did with PEOPLE magazine. 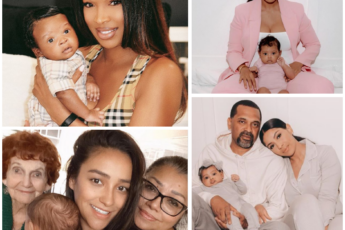