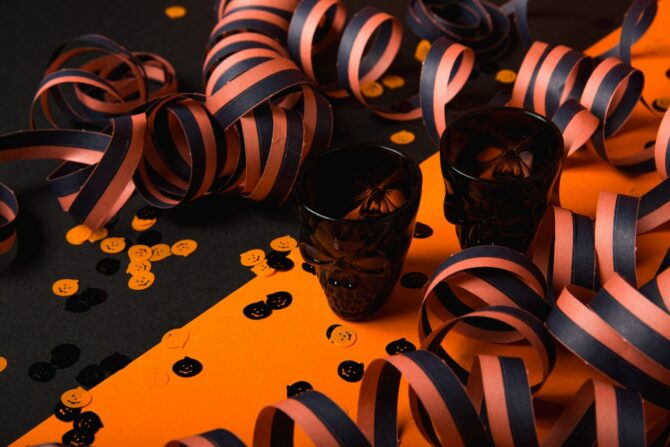 There’s no need to break the bank when it comes to throwing your next kids’ Halloween party.  By using items you already have around the house you can throw a killer party without spending a ton of money, and making your own snacks and beverages can also help you cut back on the expenses.  The kids will have a blast and you will be a Halloween hero, without going broke.

Deciding on a theme can help you tie all of the party details together. Here are a few kid friendly themes worth considering.

Use things you have around the house that go with your theme.  Drape the furniture with white sheets for a spooky, abandoned look.  Fill recycled jars with water and food coloring; float various things in them like a plastic frog or plastic eye balls and cover dessert tables with black plastic table cloths from the dollar store.

Play games that kids love, but add a Halloween twist to them.  Almost any game can be made into a Halloween game.

Choose food that the kids already like and dress it up for Halloween.  For example, you could take PB&J sandwiches and cut them out with a pumpkin cookie cutter, and then use a food safe black marker to draw jack-o-lantern face on it.  Serve bat or witch hat shaped cookies or brownies.  Give items on the party menu a creepy name by putting place cards in front of all of the food.  A bowl of grapes could be called, “Green Eyeballs,” for example and a bowl of candy corn could be called, “Witches teeth”.  Freeze some water or fruit juice in a plastic glove and then float it in green punch for some eerie fun.  Sprinkle in some creepy crawly decorations in and around the food trays.

Wrap candy bars with strips of medical tape to look like mummies.  Leave an opening to put in a couple of big googly eyes.

Kids will have fun no matter what they are doing so don’t stress out too much over party details.  Create some suspense with the invitations, set the mood with the decorations and music, and feed them fun, creepy food and you will have happy kids.  Use your imagination and ask your kids what they want to do.  You might be surprised to learn what kind of fun ideas they have.