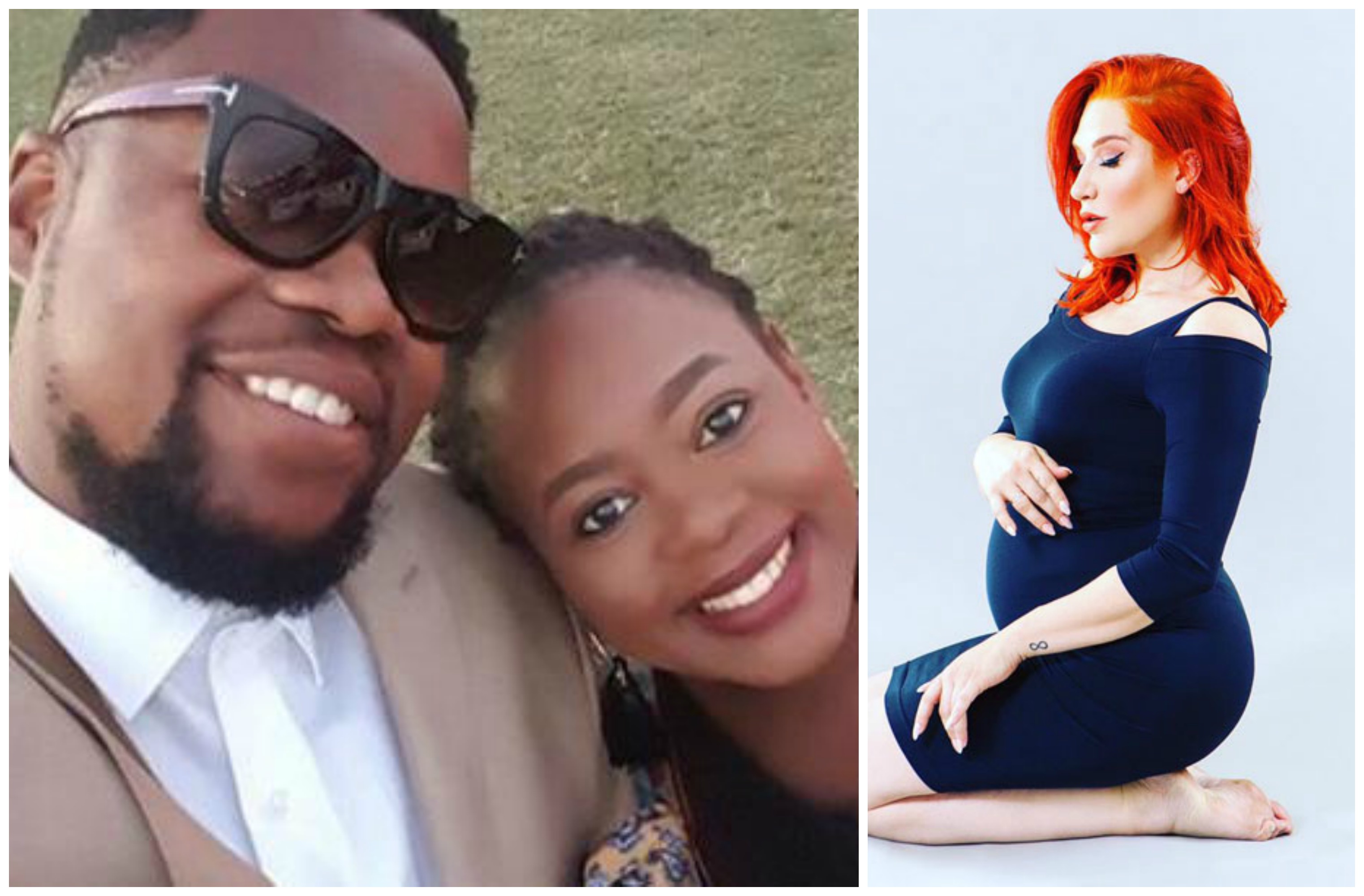 Besides the US, Nollywood (Nigeria), Bollywood (India), South Africa, and many Asian nations have their own versions of “bump watch” of their TV, Movie and Recording Artist celebrities. Once in a while, we like to feature an International Bump Watch.

Actor Mzwandile Ngubeni and soap opera Actress and Casting Director Nolwazi Shange announced recently that they are expecting their first child together. Nolwazi shared a picture of her ultrasound  on Instagram. She wrote: “It’s official. #BabyNtsika.”

The couple married last May after dating for 6 years.

Meanwhile, South African singer Tamara Dey announced on Instagram that she is her second trimester of her first pregnancy.

“With a baby on the way and a new album dropping soon, I continue to have a very active pregnancy,” the fiery red head captioned her photo of herself in a blue dress cupping her bump. “I’m promoting my new music, doing gigs and staying fit and healthy with the help of local studio, My Pilates in Dunkeld, Johannesburg as their newly appointed brand ambassador. I’m embracing this next chapter in my life with much joy and excitement and can’t wait to share both my new music and babybliss with all of you very soon.”

I'm super excited to share some very special news today and announce that I'm pregnant with my first child and in my 2nd trimester ✨ With a baby on the way and a new album dropping soon, I continue to have a very active pregnancy. I'm promoting my new music, doing gigs and staying fit and healthy with the help of local studio, My Pilates in Dunkeld, Johannesburg as their newly appointed brand ambassador. I'm embracing this next chapter in my life with much joy and excitement and can’t wait to share both my new music and babybliss with all of you very soon. Thank you to my team and to those closest to me. Your unwavering love, support and encouragement has been invaluable. I love you ♥️ All garments by @Wolford_Johannesburg Photography by Vatic Studio @BrettRubin and @Nicolevanh And a huge thx to @dmpinfo @bespokeconsultpr and my sponsors @mypilatessa @carltonhairsa @prettyleelashes and @veerosegold_nails

As we’ve blogged about before, Hollywood isn’t the only center for celebrity “bumpwatch”.

In other entertainment capitals around the world like Bollywood India, Nollywood Nigeria, South Africa, South Korea, the Philippines, and elsewhere the public and media speculate and follow the impending arrivals of their favorite television and movie stars.

We’re all about following Interntional Bump Watch too!

In South Korea, actors Song Joong Ki and Song Hye Kyo are tying the knot in October after keeping their off-set romance a secret. The two co star in the military TV drama Descendants of the Sun where, as what happens with a lot of Western actors, they hit it off and started a romance. He plays a special forces captain and she an army surgeon.

Shortly thereafter, rumors started to circulate that they would be expecting.

But the talent agency for Kyo put that speculation to rest by issuing a statement calling the rumor “completely groundless.” Hmmmm…. We’ll see. Ha!

She’s on bump watch for sure!

So, I spent part of the morning IG stalking one of my fave fashion bloggers,  Frédérique Harrell who is expecting her first child and looking fabuliciois doing it.

The Parisian stylist lives in London with her husband of two years, Tom.

This is the first child for the couple due this November.

I love that she isn’t afraid to play with color, texture and patterns even while pregnant.

Frédérique colors outside of the lines! Here are some of my fave maternity looks she has shared with her 102K IG followers.

Saturday is the day we share international bump watch and highlight expecting celebrities from other nations that have a substantial film industry like Bollywood (Indian and Pakistan), Ghana, the Philippines, Nigeria, Korea, South Africa, Thailand and other nations.

Today, we take a look back at the fabulous photos that Nigerian actresses Stephanie Okereke-Linus, Kaffy, Chidera Odiele and  Osas Ighodaro shared when expecting.

The “bump watch” phenomenon is not just an American thing.

The Western World isn’t the only part of the globe with a mild obsession with its expecting celebrity parents.

Other areas too with a healthy film, television and entertainment industry in Africa and the East do also.

For example, in Nollywood, Nigeria; Bollywood, India and South Africa, several female actresses and public figures are expecting and getting mucho coverage in the press in their respective areas.

In India, Mira Kapoor, the wife of actor Shahid Kapoor snapped a photo of herself at an event while her husband was shooting a film and several Indian and Pakistani outlets reported it. (source)

Also, the paparazzi have been stalking another Bollywood actress Genelia D’Souza Deshmukh and her actor husband Riteish Deshmukh who are expecting their first child together (source)

In Nigeria, there was buzz over an Instagram maternity pic that fashion stylist Aijay Ukonu shared online. She is expecting her first child with her husband famed photographer, Paul Ukonu (source)

Finally, in South Africa, there is buzz over South African film industry actress Carmel Fisher who is awaiting the May delivery of her first child with her property developer boyfriend of 5 years. (source)

Bump watching is a world wide phenomenon. Like it or not! Ha!

I love it when I notice other regions of the world that also have active movie celebrity culture engage in bump watch. It proves we are not the only ones out here obsessed with the incubation of the next generation of stars.

This time, I spotted Information Nigeria‘s coverage of second time mom-to-be and Nollywood  actress Mary Remmy Njoku at the London premiere of her latest project.

The co-star to the latest film project by noted Nigerian film maker Obi Emolynyre wore a fuchsia halter dress with white beaded adornment in the bodice of the empire waist chiffon dress. Her loose ringlets were a great accompaniment to the formal look.

The movie from Nigerian Thy Will Be Done showed at the on Thursday, February 26, 2015 at the BFI/IMAX theater in Waterloo, London, England.

According to the report Mjoku and her husband Jason Njoku married in 2012 and welcomed their first child together Njoku in July 2013.

The bump watch phenomenon isn’t unique to the United States and Western nations. Nope, anywhere there is an active movie and music industry (Nigeria, South Africa, India, Phillipines, Pakistan, etc), there is a corps of celebrities who get married and have babies.
The buzz this weekend was about a sighting of Bollywood actress Sameera Reddy being spotted at the airport recently.
The starlet, who married entrepreneur Akshai Varde in a very private wedding last January 2014, has been keeping low key, according to Indian gossip blogs.
Sameera was last seen onscreen in the Kannada film Varadhanayaka, but remained private and cautious about the pregnancy, and is staying off radar for a spell.
She looked cool, stylish and comfy in a striped t-shirt, framed with a black cardigan and worn with black tights and ballet flats. That’s the perfect airport and pregnant lady look, if you ask us.
photo: IndiaTV News

Filipino actress Cristine Reyes is doing a fab job documenting her pregnancy on her Instagram account for her followers and fans.
She captioned the above photo:

I have dreamy visions of pregnancy.. Cute, little bump, the beautiful glow, and the luminosity of serene happiness. In reality however, pregnancy is just like everything else in life.. Messy, uncomfortable, real.

Some women breeze through their pregnancies without a glitch, other women encounter complications that lead them to bed rest. This happened to me during my first trimester.
Now I’m doing good and can do some light physical activity, fly abroad or travel by land. I just have to support my lower back now with a pillow.

The star of the movie The Trophy Wife  and her beau Ali Khatibi, a mixed martial arts fighter, are expecting a baby girl.

They unveiled the news during a gender reveal party about a month ago.

“Bump Watching” isn’t a uniquely American phenomenon.
This weekend all eyes were on model-turned-actress Sarwat Gilani during Pakistan Fashion Week who appeared on stage at the Toni & Guy “Hair Meets Fashion” show sporting a visible bump in a shimmering sequined mini sheath dress and black shawl.

Gilani, who has starred in a string of Pakistani TV dramas and her actor husband of just three months Fahad Mirza are expecting their first child together.
Mirza said she will not let the pregnancy derail her career.
We blogged a bit in the past how Bollywood actress and former Time magazine’s Most Beautiful Woman in the World  Aishwarya Rai Bachachan‘s pregnancy led a lot of film producers to talk about inserting a no-pregnancy clause in casting contracts with female actors.
“I will continue working after having a baby,” Gilani told Dawn.com .“The world doesn’t stop when you become a mother.”
Good for you, mama! Congrats!
photos: Twitter, Instagram, Starcast, courtesy Dawn.com