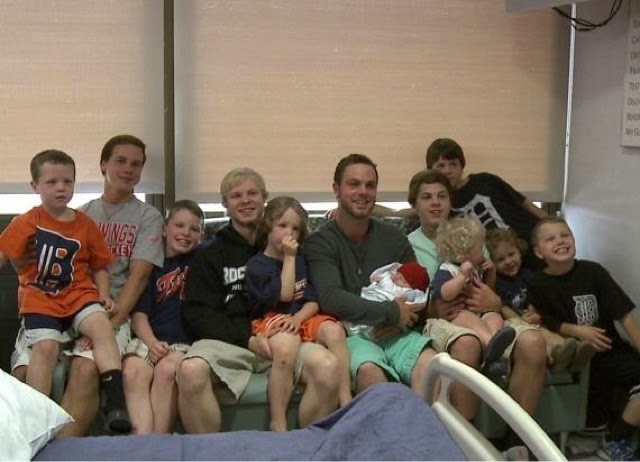 A Michigan couple with 12 sons just can’t seem to make a baby girl. Jay Schwandt and his wife Kateri welcomed their 13th son yesterday, Wednesday, May 13th of all days of the month. Kateri was four days overdue so it’s like this kid wanted to arrive on lucky number 13. Last year, when the two were in the news, they told reporters that they have a tradition of not finding out the gender in advance. “Ok, so the boys know now!” the 40-year-old father said in a post on Facebook. “It’s a BOY! Now we need to choose a name! BLESSED beyond belief!”Kateri said she didn’t mind having another son but Jay admitted he was looking forward to a girl this time.  “My thoughts are it’s probably going to be a boy,” Jay told The Grand Rapids Press before the baby arrived. “But if I could put my order in, I would root for a girl.”I’ve done all the boy stuff. I’d just like to experience it from the other side once.”Their 12 older boys range in age from almost 2 to 22 years old.The odds of giving birth to 12 boys in a row is .02 percent, a genetics expert old The Grand Rapids Press.
Repost
0 comments

This Memorial Day, many people choose to celebrate the day off by heading to cook-outs, barbecues, pool parties, picnics, fesitivals and beach outings. If you are a mom, new, veteran or expecting trying to figure out last-minute what to wear, we’ve assembled some style looks to inspire you as you plan  your outfits.

For that All WHITE PARTY…

I saw this on Pinterest by SkinnyMom blog and I thought it was perfect for my readers. Behold 50 Healthy Habits every girl should have, but I’m assuming when she says “girl”, she’s including us older “girls” . ha! :

…here is an inspirational Yolanda Adams song and video with a great message.

((((Virtual Hugs)))
from your friends at The Bellyitch Blog