Gender reveal parties can make that moment even more special by getting friends and family in on the surprise in a festive setting.

There are no rules when it comes to gender reveals, so you can feel free to play around with different ways to announce the news, as well as different party games and themes. If you’re a sports fan, you can dunk, kick, or throw a ball filled with pink or blue powder to declare your baby’s sex. If you’re a Potterhead, let the infamous Sorting Hat make the big reveal. Or, if you’re not into the whole pink and blue color motif, consider a black and yellow “What Will It Bee?” theme. Even if you’re not up for throwing a party, you can still share the big news with friends and family in a fun, creative way by planning a gender reveal photoshoot.

Make your gender reveal party a little sweeter with a delicious, candy-filled cake! When you cut into the cake, blue or pink M&Ms will spill out to artfully reveal whether you’re having a boy or a girl.

I scream, you scream, we all scream for baby! An ice cream-themed party will give your guests the scoop on your baby’s sex.

Will it be a little Jon Snow or little Daenerys Targaryen? This color-changing dragon egg would fit right in at a Game of Thrones-themed gender reveal party.

Gender-reveal ideas range from smoke bombs to bath bombs, Check out these21 Unique Gender Reveal Ideas to Celebrate Your Baby-to-Be

Sure, gender reveals don’t really reveal a baby’s gender — it’s actually the sex, which is different — and gender isn’t a pink-or-blue binary anyway. Even the person who invented the idea of gender reveals say they’re getting a little out of hand (and her daughter, the subject of the first gender-reveal party, is “a girl who wears suits,” she says in a Facebook post). But hey, pregnancy is long, hard, and full of gross things, so we won’t begrudge anyone for trying to eke out every bit of joy.

If you’re looking for a moment in your pregnancy when you can replicate that Christmas-morning anticipation of opening up a box and being super-excited about what’s inside, these gender reveal ideas might be just the thing. But how to announce the sex of your baby to the world?

If there’s one huge trend in the gender–reveal world, it’s Holi powder, or vibrantly colored powder that was once mostly used in Hindu celebrations (but you can now find at your local Color Run). You can shoot it out of a cannon, pack it in a baseball and hit a grand slam, or even stick it under your tires and watch the plume when your car spins out. If colored powder isn’t your thing, there are also sweet treats, balloon crafts, and silly string fights among these unique gender–reveal ideas.

CHECK OUT THE BELOW IDEAS

Those delicious-looking cake pops have both pink and blue on the outside, but once you take a bite you’ll be able to see the pink or blue cake inside.

Because everything in life is more fun with confetti! With these poppers, the confetti shoots up to 15 feet in the air.

Not only will the color inside reveal the baby’s sex, you’ll get to take out one last bit of aggression before the baby arrives and you’re expected to be a calm mama all the time. 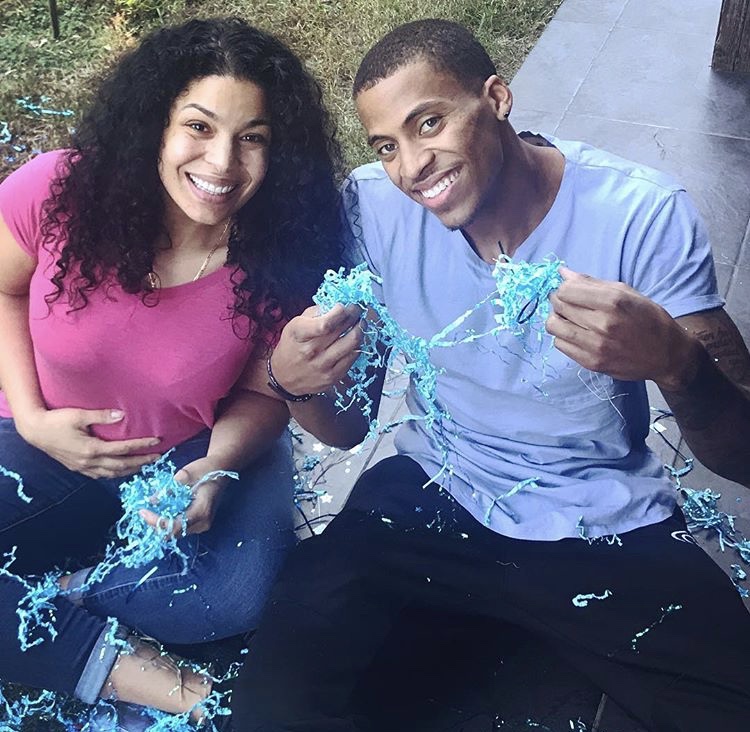 It’s a boy for Jordin Sparks!

The American Idol champ and her Model husband Dana Isaiah are expecting their first child.

The singer and actress announced the news on her Instagram page.

“IT’S A BOY!!! We have so much to be thankful for and this is definitely at the top of the list!,” she captioned the photo of her self and hubby holding blue confetti “ @_danaisaiah’s gonna have a little mini me running around! We can’t wait to meet him. We love you lil man! ????

Isaiah gave his followers a preview of what to come.

”Unbothered and enjoying life ? Side note: I find out the gender of my first born in less than 24 hours ?” he captioned a photo on his page.

Unbothered and enjoying life ? Side note: I find out the gender of my first born in less than 24 hours ?

In the video that she posted on her website, the former model is shown with her 4-year old son Brooks Alan and 19-month old daughter opening up a box filled with balloons that are either pink or blue.

When they lift the top, blue balloons float out so…she is having a boy! Later in the video, her kids are seen painting her belly with blue finger paint.

Sims told the kids they are “going to have a baby brother.” She went on to say that Brooks has already named the baby “Jack and the Bean Stalk-Batman” and that it’s been “really sweet to see him so involved.”

Also, this week the 43-year old stepped out on Thursday, November 10, in a cute H&M print midi dress as she headed off shopping to Barneys New York in Beverly Hills California.

In August, Sims announced her third pregnancy with husband, movie producer Scott Stuber. In another video posted on her website, the Las Vegas actress broke down talking about fertility struggles she had to conceive her first child which she welcomed at age 39 but we must say, having had 3 kids back to back after that, including an unplanned one, she’s over that hump

The “Everyday Supermodel” author has a tradition of big video gender reveals. Last January 2015, she had a big reveal for her then soon-to-be-born daughter. Lovely!