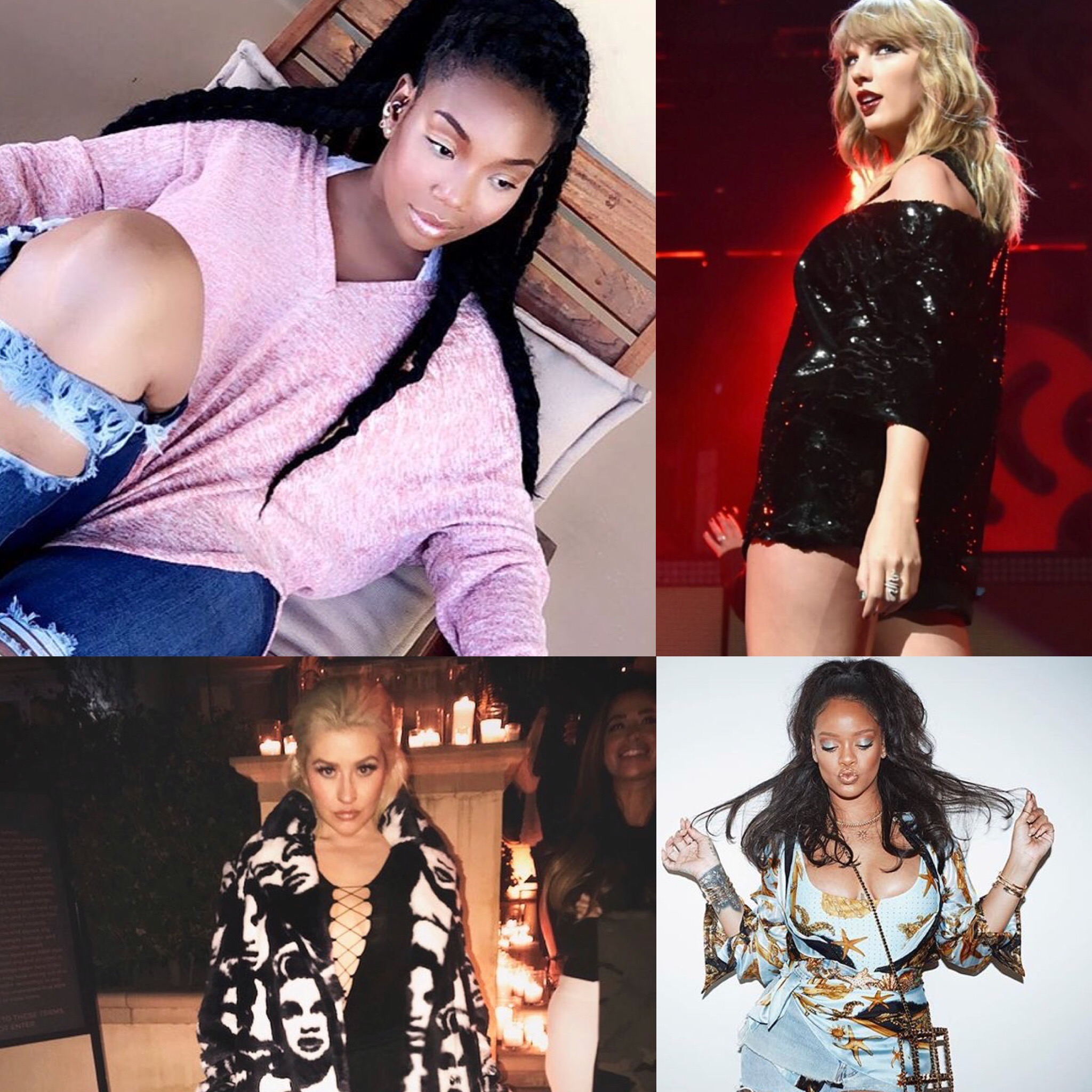 There is one common and often made misconception about any female celebrity who is also famously known for being very thin: that they are pregnant.

I see it all the time and more recently with several female recording artists, including two of our past Bellyitch Bumpwatch alums: Christina Aguilera and Brandy Norwood. Both of these two ladies exploded on the scene in the early 2000s at very young ages before becoming moms and since then, they’ve both added a few pounds, taken off some and fluctuated like most women do. When the metabolism slows, priorities change, and old bad habits are abandoned weight fluctation happens.

Recently, two other A-list pop sensations have been feeling the sting of body shamers.

Rihanna has embraced a curvier frame and has been showing it off deliciously in seductive clothing as usual, but not all in social media have received her fab bodacious body. I do not care to elevate mean people so I will skip sharing the proof of the horrible stuff I’ve seen from random folks in her mentions.

Similarly, Taylor Swift has been wearing sheath dresses much and her thighs and body overall is not as rail thin as before. She is older, and reports state in a different place in her life and as such has been less consumed with meeting that Hollywood super thin standard.

Good for all of them.

And the common thread is that members of the public and then consequently, the gossip press push forward stories that they are expecting and hiding it with baggy clothes.

Most of the times, they are just living their best possible life and happy being free of restrictions and ultra strict diets! And Romper credits the pregnancy tag to the loose baggy clothes trend! Aaaah! Makes sense!

Keep on rockin it hard, ladies!

Blake Lively and her husband Ryan Reynolds attended her good friend Taylor Swift‘s annual 4th of July party at her Rhode Island home. During the party, guests enjoyed frolicking in the beach, sliding down a giant water slide, chilling on the porch and sitting by the fire and watching TV decked in stars and stripes outfits.

Oh to be young, rich and famous!

There was a bump watch sighting when the Gossip Girl alum donned a bikini on the beach.

@people here, they with Gigi and Karlie pic.twitter.com/RKIT5kld8O

— Hary Dev (@hary_1211) July 4, 2016There was a lot of buzz on the net over a big kiss she planted on Reynolds while surrounded by the A-List squad which included models and models turned actresses and  e(voted the Lesbian who most straight girls say ‘can get it’).

There was a lot of buzz on the net over a big kiss she planted on Reynolds while surrounded by the A-List squad which included models Karlie Kloss, Gigi Hadid and models turned actresses Cara Delevingne and  Ruby Rose(voted the Lesbian who most straight girls say ‘can get it’).

Emmy Winner Orange is the New Black‘s Uzo Aduba was there with her daughter Chioma so it was a family affair as well. Judging by the photo of the fun on social media which you can view by going here, a great time was had by all.

Lively is expecting her second child this fall. She and Reynolds are parents to son, 1-year old Otis.

Tonight was another celeb-studded musical event at the 2015 MTV Video Music Awards at Microsoft Theater in Los Angeles, California.

Several of our Bellyitch Bumpwatch alums graced the red carpet before the event, took the stage and were nominated for quite a few awards.

Mega star Beyonce Knowles Carter was a no show even though she was nominated for 5 awards for her “7/11” Video (Best Female, Pop, Editing, Choreography, Video of the Year). She won only one for Best Editing.

Jennifer Hudson couldn’t make it either despite being up for the Best Video with a social message award for her song, “I Still Love You.”

Britney Spears showed mucho cleavage in a showgirls-esque gold sequined number with cutouts in the tummy.

Her sis Kourtney Kardashian was giving up the sexy in a hot pink jumpsuit, fresh off of winning our 2015 Posh Mom Icon award.

Their family’s arch nemeses Amber Rose and Blac Chyna came dressed in matching nude outfits with cartoon caricture lettering featuring all the insulting names that people have called the duo who are headed for an MTV reality TV show this fall.

The show wasn’t without its dramatic moments, of course, including some toxic exchanges between show host Miley Cyrus and Nicki Minaj who won the Best Rap Video Award for video for “Anaconda“. It was the same video Minaj suggested was deserving for being up for the Video of the Year Award but was slighted because she felt the women featured in the video weren’t thin.  Taylor Swift assumed it was a slam against her given all the women in her Bad Blood video were pretty much rail thin and the two had a brief Twitter beef which reeled their fans in on it and was more or less squashed until Cyrus added her two cents during a promo appearance on Jimmy Kimmel Live. Cyrus said Minaj was “not nice”.  The rest is history and can be seen on Twitter but since we’re about promoting positivity by and among women, we’ll leave it at that.

Ciara showed off a new bob in a fringed black outfit and Law and Order‘s Mariska Hargitay made an appearance in all black while walking with the other members of “The #SwiftSquad” from Taylor Swift‘s “Video of the Year” winning video “Bad Blood.”

My fave look for tonight came from singer Tori Kelly who looked stunning in a a laced long sleeved top tucked  in a cute pair of high waisted shorts with a gold clutch and black bowed pumps, with tussled hair to complete the look. Her bronze sheer makeup was flawless. Yassss!

First, Taylor Swift was credited with getting Apple to change its mind about revenue sharing with artists during the three-month FREE trial period on its new streaming service, and maybe soon, Kim Kardashian may be credited with giving us all the edit function on tweets.

Last week, the mom-to-be tweeted that she had asked Twitter to add the ability for users to edit tweets rather than delete them and repost them. Co-founder of the immensely popular social media siteTwitter Jack Dorsey responded to her tweet with, “Good Idea.”

Recall, it has only been since 2013 that users have been able to edit Facebook statuses.

Also, certainly, others have made the request for that function on Twitter before but they are not the highly influential Kim Kardashian are they? Ha! And some people are butt hurt a bit about it too:

I don’t want to live in a world where I end up having to thank Kim Kardashian for the ability to edit tweets… — Kevin Fippin (@kfippin) July 25, 2015

Certain @twitter would have an edit function on its product roadmap far ahead of a Kardashian suggesting it. http://t.co/lBkqplDTVj — Nichole Bigley (@NicholeBigley) July 25, 2015

I know I am making a late pass, but I just watched Taylor Swift‘s “Bad Blood” video which was nominated for a 2015 MTV Video of the Year.

I immediately noticed all the cameos from some pretty kick ass pop stars, models and even some iconic figures sprinkled throughout the futuristic set Joseph Kahn-directed mini-movie.

Standing out to me also was all of the Bellyitch Bumpwatch alums and moms we’ve featured in the past: Lily Aldridge, Jessica Alba, Ellen Pompeo and Mariska Hartigay

Swift debuted the video at this year’s Billboard Music Awards in May, along with some of the co-stars.

Aldridge was “Frostbyte” and engaged in an epic training battle with Swift’s character, “Catastrophe“, while Alba, as “Domino”, rode along with her on bad-a*ss souped up motorcycles as “Justice“, played by Hargitay and “Luna”, as portrayed by Pompeo, seemingly were senior members of the coven who okay’d the battle with her former partner turned nemesis “Arsyn,” played by Selena Gomez.

It could sound confusing if you haven’t seen it so here ya go: Check it out:

In it, she discusses body shaming of pregnant women:

“Pregnancy is the ultimate symbol of womanhood, beauty and sensuality, so make it a celebration of creating life. You don’t have to hide anything or try to suck in your belly. Why not put on things that are tighter, flashier, or more fun? Wearing formfitting clothes totally counteracts that voice inside of us that says, ‘Ugh, I just want to lie down all day and sleep,” the former teen and adult model explains. “I feel it’s really important to feel good about yourself, and fashion is part of that.”

She says people (probably in social media) have told her she needs to go eat a sandwich because she is perceived as being too thin.

“All that matters is that you’re taking care of the nutrition for yourself and your child,” she responds back relating to the critics. “Don’t let other people get you down, and don’t put other women down, either.”

King, who has selected Taylor Swift to be the Godmother of her soon-to-be born daughter, says she enjoys “every part” of being a mom and being pregnant especially given the fact it took her 7 yeas to get pregnant having suffered with endometriosis and polycystic ovary syndrome.

King welcomed her first child, son, Jaime Knight on October 6, 2013. This will be her second child with husband movie director and producer Kyle Newman.

If you are among the millions of harried moms out there, you’re going to relate and find hilarious this
Taylor Swift parody to  “Shake It Off”.
It comes compliments of popular YouTuber Deva Dalporto‘s MyLifeSuckers page.  The mom genius interchanges the lyrics from the popular song from Swift’s 1989 alum with words and scenarios most of us moms can relate to.
Hilarious stuff!
Check it out!