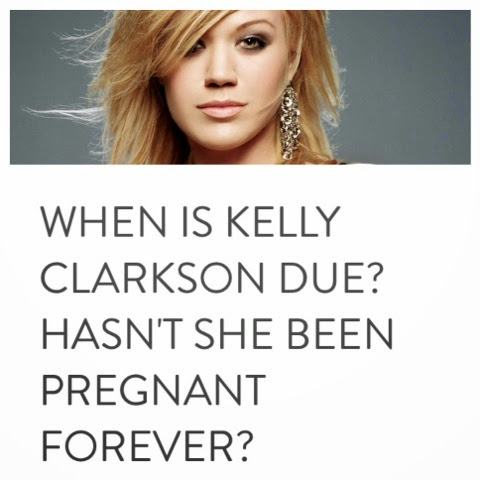 I spotted this question in the headline of a recent blog article querying the due date of the former American Idol champ & award-winning singer, Kelly Clarkson.
It is a common question or related comment many state in the comment section of stories about the singer’s pregnancy.
She is but the latest in a series of celebrity moms-to -be who are thought to have had very longer than usual pregnancies.
Some just seem to be “pregnant forever!”
In my memory, I recall people thinking  Alicia Keys, P!nk, Amber Rose and a few others had excessively long pregnancies. Others, seemingingly pop out a kid the week after you learn they’re preggers.
What’s the deal?
It has to do with a few factors:
1. releasing the news early. If a celebrity shares news of her pregnancy in the early second trimester, or like Kourtney Kardashian did in her second pregnancy in the first 12-weeks, then the public has 6 months of seeing plenty bump watch images and articles about the celeb.
2. popularity of the celeb. Some  celebs are more popular than others and/or are stalked more by paparazzi. Each day and photo means another article about the spotting to be published in one of several gossip sites.
3. heavy event season. Some celebs wind up knocked up while promoting a new project or during Tv upfronts or award season. Therefore, in addition to paparazzi pics in the rags, you’re seeing them in mainstream publications too. It can be overkill.
All of that makes it so every time you look up on your Computer screen over the course of 24 weeks make it appear like a very long long pregnancy.
There you go! It’s still just 40 weeks but we know exactly what you mean!
By Jeneba Jalloh Ghatt
Study: Pregnancy is Contagious or Keeping Up with the Joneses includes Baby
This Weekend: Go on a “Digital Detox” & reconnect back with your family