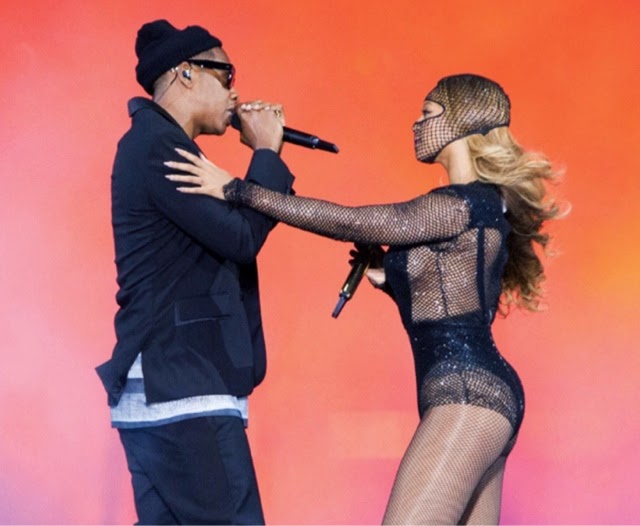 During a 2-day special performance extension of Jay Z and Beyonce‘s On-the-run tour at the Stade de France in Paris this weekend, Jay dropped a hint that his wife may be pregnant with the couple’s second child.
While performing the song “Beach is Better“, he changed up the verse “I replace it with another one” with the lyrics “pregnant with another one.”  The switch up created a frenzy on the interwebs among fans of the dynamic married duo.
Hova showed the City of Light mad love when he added during the closing, “We love Paris..It’s special to us because we got engaged here and this is where baby Blue was conceived.”
Bey returned the love and told her hubby, “I’m your biggest fan. I love you,” to which he replied, asking the audience to give it up to the “greatest entertainer in the world. I love her. She’s my wife.”
So much divorce squelching fodder that we’re sure the haters will still dismiss as an act, but forget the haters cause you know? Haters are gonna hate. That’s what they do best.

Anyway, so Beyonce image control crew tried to put the rumors that circulated around Jay’s verse switch up by posting a photo of the two celebrating after the show holding champagne in glasses, but as it is a photo and not a video, we really don’t know if she drank any or it or if it was Martinelli‘s which is non-alcoholic! ha! You’re not fooling us, doll. (smile)
The two-night headline was filmed for an upcoming HBO special produced in conjunction with Live Nation. These two stay making money, tho, right?
— Bellyitch staff
photo: Twitter, Facebook
By Jeneba Jalloh Ghatt
beyonceCelebrity pregnancyHBO speicalJay z beach is better
Zoe Saldana’s NYC Fashion Week- Get the Look!
‘I am Eleven’ movie features stories from children worldwide turning 11-years old