And it doesn’t matter if that woman is plus sized like model Tess Holliday who is nine months pregnant or very thin midwife and lifestyle blogger Hannah Polites who is 6-months preggers but barely looks it.

Both women have faced some criticism from the public who have made comments on their social media shares.

One has been fat-shamed. The other is skinny -shamed.

And both recently felt the need to post near nude photos to respond to critics.

“When people say to me, ‘I can’t tell you’re pregnant,’ ” Holliday captioned a nude bathroom selfie of her distinct pregnancy belly. “I will continue to live unapologetically, to thrive in this body, prove the naysayers wrong laugh at the ignorance.”

Polities regularly shares bikini photos anyway, but recently she posted one to her 1.2 million Instagram followers in her underwear revealing a very tiny bump.

“Unfortunately, it’s become common for society to comment on the health of a person simply from their size being different to what they perceive to be normal,” Polites told PEOPLE. “However, I do not take the small amount of negative comments to heart, especially when I know I am making informed decisions when it comes to nutrition and exercise in pregnancy and motherhood.”

The negative comments are not the majority but, of course, the squeaky wheel gets the oil and there is often focus on the nastiest voices even when they are in the minority.

Polites was very fit before becoming pregnant with her first child and remains fit now and eats very healthy and organic which may factor in her small size.

“I think it’s important not to compare ourselves with other women, there is no right or wrong way to carry a baby and there is no universal standard of what a pregnant body should look like,” Polites reminds.

Polites thinks the negativity comes from how we treat pregnant women, but, again, it’s not most.

“It was overwhelmingly positive to be honest, mainly with themes of inspiration, congratulations and encouragement,” she says.

Hannah Polites shows off her barely there 6-months bump. 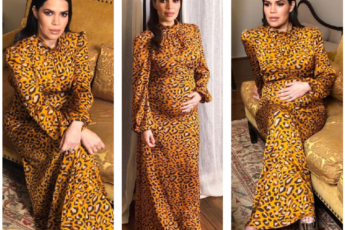