“Being a mom and an elite athlete is difficult, but it’s very rewarding. I wouldn’t have it any other way,” said brand new Rio Olympics 100 meter hurdles silver medalist, Nia Ali, one year after a surprise pregnancy sidetracked her professional track career.

The 27-year old and her teammates gold medalist Brianna  Rollins and bronze medalist Kriari Castlin swept the podium. It was the first sweep of any category in US Track & Field history.

The road to Rio was bumpy for the new mom who only have birth to her son Titus Maximus in summer of 2015.

Way before welcoming her first child, she was shaken when, in 2009, while a sophomore at USC, her dad killed himself in a murder suicide. He shot the woman he was involved with in front of her 11-year old daughter before turning the gun on himself. The tragedy messed her up in academics and athletics.

But she overcame it and didn’t let an unplanned pregnancy sidetrack her for long either.

After taking a year off from competition following the birth of her son, the Philly native returned to win the 2016 World Indoor Championships and successfully defend her gold medal. After winning, she carried her son on the victory lap. Now, he is an expected and welcome fixture on the track after each of mom’s wins.

He’s almost like the Riley Curry of track.  Ali is a wonderful poster-child for mom athletes and is inspirational.

Young Titus was a blessing and pregnancy was not career suicide. Ali was determined to not make it so.  As IAAF reported:

“It’s one of those things when you know it’s great”, said Ali, who always wanted to have a lot of kids, especially coming from a family with 25 siblings. “But in our sport, it’s considered a career suicide. I was 26 and I wanted to make the best of it. And immediately, I started looking forward to defending my world indoor title in 2016.”

After maintaining her usual training regimen for the first four months of pregnancy, Ali went back from Los Angeles to her family in Philadelphia and decided to relax.

“I talked to Jasmine Chaney (the US 400m hurdler), who’d just had a baby, and she told me: you should take it all in. I followed the advice, as I knew once I got back, there was going to be some serious training, and I wanted to be ready for it.”

They also wrote about her excellent support system:

The now twice world indoor champion was thrilled that her son Titus was actually there to witness her triumph.

“I don’t take him to the track too often when I train, because I haven’t mastered that whole ‘focusing when he’s around’ thing,” she laughed. “I get into a parent mode too quickly. Unless my mom or his father (400m hurdler Michael Tinsley) are there, I can’t focus.

“I love my son, love coming back home after long days. It puts what I do on the track in a perspective, and I have an amazing support system that helps make it happen. I can’t take the full credit.”

And that support system was right there in the stands witnessing Ali make history. 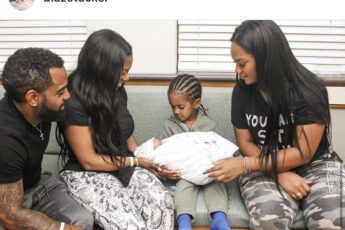