We usually don’t like to step on pregnancy announcements before formally made (yeah right!? ?), but gossip sites are claiming that Kate Middleton (Duchess Catherine of Cambridge) is expecting her third child.

Star magazine reports that during afternoon tea, George went up to his great grandmother, the Queen and told her he had a secret. The room went silent and then he spilled the beans.

From Hollywood Life which reminds us that Kate has said she wants 5 kids by age 40:

“It ended up being incredibly sweet. George approached his great-grandmother and exclaimed that he had a secret to share. The room went quiet when he said that ‘mummy has a new bubby in her tummy!’” The queen allegedly called for a champagne toast immediately. “She was delightedly hugging Kate, who was beaming from ear to ear,” the source added.

And apparently, the queen’s cheery spirits totally got William off the hook about his rowdy ski trip last week. “William knew that as soon as he returned to England he’d be in for a serious scolding,” Star’s insider said. “He was on his way back and getting ready to face the music, but it’s no surprise that all was forgiven and forgotten following George’s absolutely adorable announcement.”

For those who need a refresher, the king-in-waiting shook his princely responsibilities on March 13 to go skiing in Verbier. The prince was with his friends and dancing with a blonde instead of attending Commonwealth Day services with his family. But while some reports have said Kate was “humiliated” by her husband’s behavior, Star claims it was HER idea for William to have a boys’ trip.

“It was actually Kate who insisted he go on one last boys’ vacation before focusing on the new baby,” a source for the magazine said. “It’s just a shame it looked like he was having too much fun and absconding from his duties. Who could have known he may have simply been celebrating his wife’s third pregnancy?”

The couple reportedly do not know the sex of their alleged unborn child yet, but they apparently couldn’t care less either way — they just want it to be healthy. “Kate is in fine form right now,” the insider added. “She’s full of energy and hasn’t stopped…William is ecstatic.” 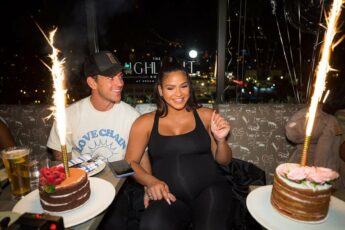